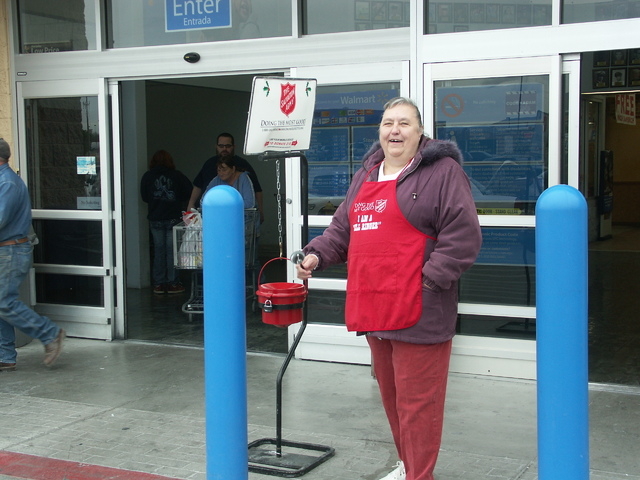 The tradition goes back more than 100 years.

The Salvation Army’s annual “Red Kettle Drive” is underway where bell ringers have set up shop outside the doors of at least two retail stores in Pahrump.

Just one day after Thanksgiving, volunteers have set up shop at the entrances of Smith’s and Walmart on Highway 160.

On Tuesday, Salvation Army Lt. Tim Brown said the past four days have exceeded even his expectations, while noting the need for more volunteers.

Last year, volunteers rang up more than $24,000 during the campaign.

“The more volunteers we have, the more money that can go back towards helping people,” Brown said. “The community is really generous and we are a little bit up from last year at this time. It’s not a huge amount, but we’re matching and doing a little bit better,” he said.

Local resident Diane Wilde on Tuesday stood fast at the Walmart entrance with bell in hand.

“I smile a lot and that seems to help people get into the holiday mood,” she said. “When my kids were growing up, we’d give to the red kettles. I told them it was for people who didn’t have much. They said ‘we are poor’ and I told them that there were poorer people than us. We may be poor, but there are people poorer than we are.”

At present, Brown said the kettles have yet to yield such a booty.

“I’ve certainly heard of that happening, but in the last three days of this kettle season, nothing yet, but I welcome it,” he said. “We’ve been blessed and we’ve had a couple of hundred dollar bills that have come in. People have definitely been generous.”

Brown also said those who wish to volunteer can take part in the holiday food distribution program, where families who have previously signed up this year will get to enjoy a traditional Christmas dinner.

“We are actually putting together those meals in boxes as well as toys for children right now,” he said. “We also have Angel Trees out at different locations. People who want to volunteer can just give me a call at 751-6171.

Brown also reminded the community that many great Christmas gifts can be found at the Salvation Army’s Thrift Store at 240 Dahlia St., behind Walmart.

Additionally, Brown noted that the location of the Social Services office has moved to the organization’s main site at 721 S. Buol Lane.