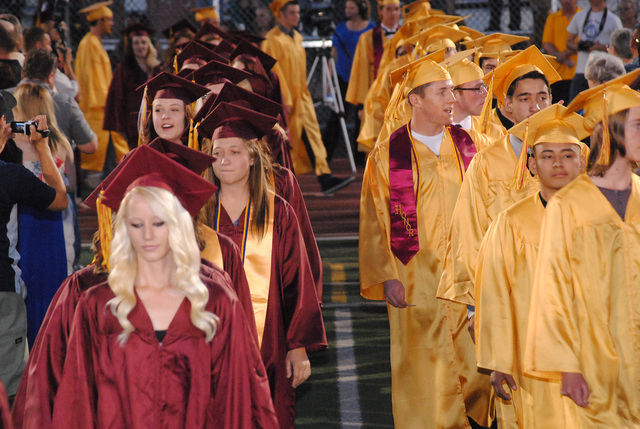 The Nye County School District saw its graduation rate decline last year, according to numbers released Friday by the state.

Superintendent Dale Norton said the district continues to work with students and teachers to improve the graduation rate, which is below the state average of 70 percent.

“Updating curriculum, training teachers, and making sure students are in school are among several plans being implemented at this time to improve graduation rates in Nye County School District,” Norton said. “As reported to the School Board of Trustees during the January 9, 2015 meeting, (Pahrump Valley High) Principal Chris Brockman is currently tracking credit deficient freshman students, meeting with them, and making plans for remediation in an effort to keep students on track for graduation.”

Nye County had the second lowest rate of the state’s 16 county districts, according to Friday’s numbers released by the Nevada Department of Education. Mineral County had the lowest rate at 64.71 percent, while Storey County reported a 93.1 percent rate.

The graduation rate is based on all students who entered their 9th grade year during the 2010-2011 school year anywhere, who attended at least one day in a Nye County School District high school, and who left without known to have enrolled into another school prior to the end of the 2013-2014 school year. The rate is based on students who earned a standard diploma, an advanced diploma or an adult education diploma.

The graduation rate numbers came the same week Nevada education officials announced a plan that could see the state operate 78 underperforming schools as charter schools, including six in Nye County.

The six in the Nye County are the elementary schools Hafen, Floyd, Round Mountain, Amargosa Valley and Gabbs, and Pathways High School.

Gov. Brian Sandoval proposed the state should take over the underperforming schools under an “Achievement District.”

The announcement was part of Sandoval’s proposals during the State of the State address for boosting school spending by $782 million, school choice with charter and zoom schools, English language programs and reforms to modernize the classroom and the Nevada system for distributing funds statewide.

Norton said he was “pleased to hear of the commitment from the governor regarding education” in Nevada, but the district will continue to work to improve throughout the county.

“I would like to assure Nye County we will continue to work as hard as we can, not only for the underperforming schools but for all students of Nye County School District,” Norton said in a statement.

“We will continue to work cooperatively, and directly with the Nevada Department of Education. We will also continue to assess, review, and revise School Improvement and District Improvement Plans with the allocated funds the district receives.”