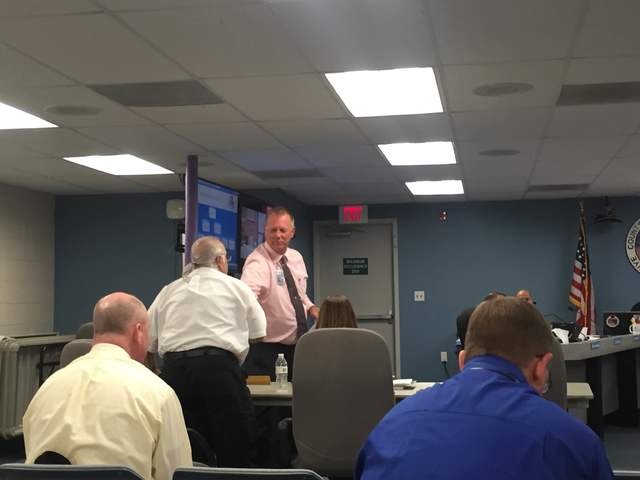 The Nye County School District is in the early stages of a district-wide reorganization plan.

At the board of trustees meeting Tuesday, Superintendent Dale Norton spoke of the possible changes for over an hour, laying out what a pair of outside entities discovered about the struggling school district.

The goal of the change-up is to put more focus on the students in the district, and not on the running of it.

A big part of the change will be reordering the hierarchy that the school district is run under, which would mean the adding of a few new positions, but without adding to the budget.

“This reorganization plan… will cost the district no additional money,” Norton said.

“What this does is it puts two associate (superintendents) in place… I would also be putting in place a director of rural schools.”

The director of rural schools would be placed in the northern part of the county as a district-level director, with responsibilities to the schools in that area, which Norton said is a need he hears about from the north all the time.

Making these new positions possible without adding any cost to the district is tied to a few happenings, with the major one being the retirement of Dr. Kim Friel, which Norton called a “high-dollar position.” Rolling that money into associate positions is not as high as Friel’s position and reorganizing internally and future vacating of positions will allow for the new positions at a zero dollar increase.

In addition to the new positions, the redirecting of resources to support the district’s educational goals that would focus in on student outcomes.

The rearranging of the operations of the school district, allowing more capacity out to the schools to help mentor principals and teachers, which would affect student outcome.

The addition of two associate superintendents would allow for someone to be in charge at all times, even if Norton was away.

Staff would be assigned to a higher level of responsibility, allowing them to view the system on a broader scope, according to Norton.

The board of trustees pledged their full support to the reorganization plan.

Largely spurring the changes is when Norton brought in third-party groups to examine the district, a move that he said was, “taking a personal risk,” due to the unbiased opinions that pair of groups would divulge about the county.

The groups brought in were the University of Virginia/Partnership Leaders in Education, which carried out a turnaround readiness assessment report in August, and WestEd, who conducted a Nevada Comprehensive Curriculum Audit Tool for Districts summary report in 2013.

The findings by the two groups gave the district all the reasons they needed to change up what they’re doing educationally in the county.

WestEd found that NCSD average scores in math, reading and science were lower than the state’s average, with the exception of 5th grade science.

In addition, the average percent of students proficient in writing was five to 10 percentage points lower than state average.

The average reading scores in the district in grades 5 through 8 were around five percentage points below the state average.

The WestEd team concluded that the district needs a consistent K through 12 district-wide approach to writing that is more aligned with state expectations.

Based on their findings, alignment of math curriculum district-wide was set as a priority. It was suggested that kindergarten through eighth grade math instruction focus on district improvement efforts, specifically professional development for teachers.

The readiness assessment report compiled by the University of Virginia’s Partnership for Leaders in Education showed that the district is poised to do great things, but needs some adjustments to the existing central office staffing and structures to enable the transformation into the articulated district it desires.

There were several areas of concern found by the report and there were suggested steps to remedy those issues.

There were issues with priorities and expectations of each NCSD leader, as they varied based on their role and their personal opinion. It was recommended that a tactical approach was taken to set common expectations and standards to confirm commitment to the plan.

The role of the principals and teachers to drive student proficiency was unclear so the report suggested that the district deploys mentors and central staff to increase the capacity of principals and to develop instructional skills of the teachers district wide.

Furthering that increasing the number of days teachers had professional development days higher than the current five days of voluntary time by scheduling it during the standard workday and even mandating their participation.

With the pair of group findings in mind, the goals for the proposed reorganization were laid out by Norton and they were, to elevate achievement for all students; increasing the graduation rate; to empower and hold the superintendent responsible for implementing the district’s direction and managing district operations; and adopting budgets that direct resources to support educational goals.

To accomplish such goals Norton said there needed to be a paradigm shift and to shift focus onto the whole child.

Norton used a once troubled student who spoke just before his presentation at the meeting about a new program at Pahrump Valley High School, JAG, and how it turned his view on school around completelyand was an example of how the district could begin to raise its academic results.

“We had a prime example of a young man standing before us that because of the focused efforts, has made a change in his life,” Norton said. “He may not graduate on time, but I’m assured that that young man is going to graduate. I could hear it in his voice.

Norton explained like almost any other change, all aspects of the reorganization plan might not be comfortable for all involved, but the district would figure out how to make it work.

The changes really come down to bettering every student’s time during their school years in the district, setting them up for their best chance at success during and after their schooling is complete.

“I care about the kids,” Norton said. “I’m tired about talking about change. I want change.”