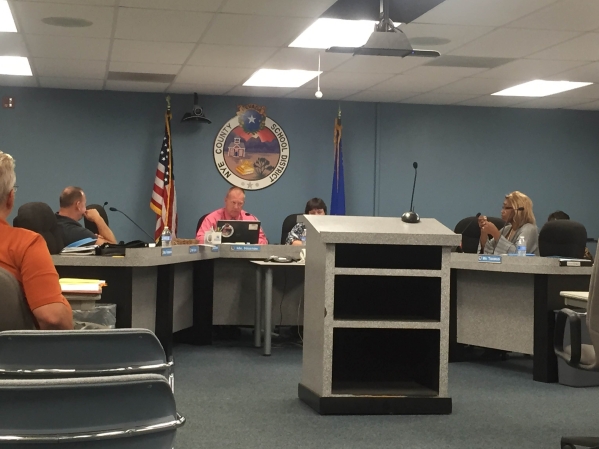 The Nye County School District plans to take tougher measures against teachers who break contract and leave the schools in limbo upon their departure.

Norton saw the need to beef up the consequences on those who flee before fulfilling their contract due to several staff members leaving the district already this school year.

“The measures are for all certified staff members that sign a letter of intent or a sign a contract with the Nye County School District and they break the contract before the end of their service, which we’ve had eight of those to date,” Norton said. “We make sure that all staff have that document on the first day of employment, the first day that they came back to work this fall.”

The consequences of leaving early can mount up, as the first part of the three-tier plan is a $2,500 fine will be levied on a staff member who breaches contract.

Not just new teachers are committing the violation, as veteran staff members have also broken contract after not wanting to continue teaching any longer.

In addition, Norton explained that the district will hold the departing staff accountable in other ways outside of the financial penalty as their long-term career could be impacted as well.

Norton also explained that some faculty members who broke contract in the past have somehow returned to the district later on, and they want to send out a clear message on that as well.

“They do not have rights to come back to the Nye County School District,” he said. “We have had some people who have broken contract… left the district, and somehow through the system got back into our district. As a leader of this district, I think that is wrong.”

Lastly, Norton said that they would also explore trying to revoke the teaching license of the staff member who broke contract. This step would be on a case-by-case basis, and Norton said that those who didn’t pay the fine or set up a payment plan for the fine would be the most likely candidates for this final step.

“We have also had discussions with our legal team about licensure,” Norton said. “If the district wants to move forward from removing the person’s licence from the state of Nevada, for being unprofessional and breaking contract.”

Norton said that three areas would be considered that the district would grant an exception for those who break contract and not have to face the penalties: Health or care for a family member, health issues for the departing party and spouse’s job being relocated elsewhere outside of the district.

Of the eight that left early this year, two have paid the $2,500 fine so far and two have been given exception to not have to pay the fine, Norton said.

Also, none of those who broke contract already this year were employed in any other school district in Nevada as of Tuesday’s meeting.

“The other 16 public districts validated with me that they did not take any of these folks on,” Norton said. “So that was encouraging to me.”