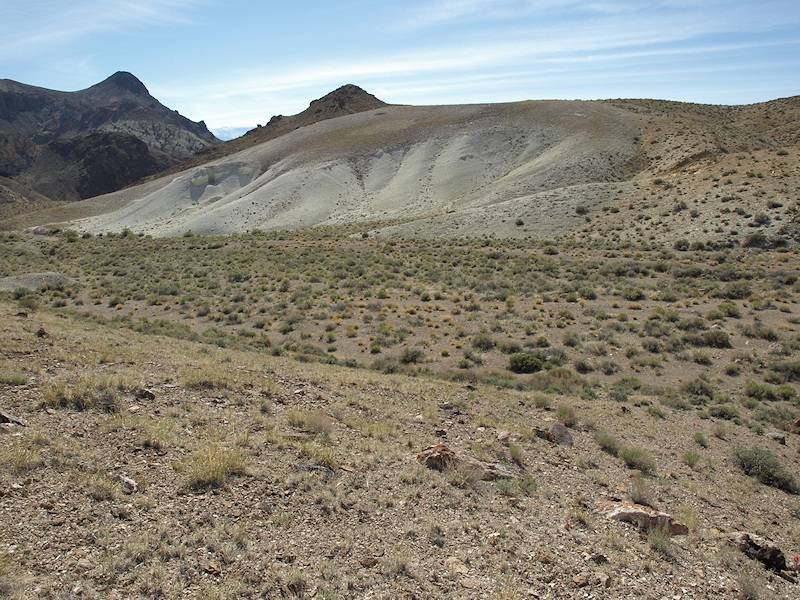 Nevada Department of Conservation and Natural Resources The Nevada Division of Forestry will be reviewing the need to further protect the Tiehm buckwheat under Nevada Administrative Code Chapter 527.

Tiehm’s buckwheat, a desert wildflower that grows in the small area of the Silver Peak Range in Esmeralda County and nowhere else in the world, is under threat from lithium mining, according to nearly 100 scientists who recently signed a letter urging Nevada officials to protect the rare species.

The letter to the Nevada Division of Forestry states that Tiehm’s buckwheat faces an extinction threat from the mining project called the Rhyolite Ridge Lithium-Boron Project, an open-pit operation proposed by the Australian corporation called Ioneer Ltd.

According to the letter, the extinction threat to Tiem’s buckwheat is “clear.”

“The proposed project identifies that more the 60 percent of the living plants of the species would be extirpated in the first phase, and the footprint encompasses the entire global range of the species,” the letter said. “As proposed, the project threatens the continued existence of Tiehm’s buckwheat, including its long-term viability, integrity of its habitat, and the associated biota and ecosystem function that it supports.”

A recent global assessment found that at least 600 plant species have gone extinct and that plant species are lost at a rate that is 500 times higher than the background extinction rate, the letter stated.

Rhyolite Ridge is one of several proposed projects in the state that aims to extract lithium – a chemical element that is a key component in the production of lithium batteries for electric vehicles and solar storage.

And while lithium is expected to play a major role in reducing carbon emissions in the future, many proposed lithium projects have seen a lot of pushback from scientists and environmentalists for a host of reasons, such as the impact on the environment and species.

Ioneer Ltd. has already spent millions of dollars exploring the area and it claims that the proposed site is one of the largest undeveloped lithium-boron deposits in the world.

The company has agreed to finance a five-year extension of a research project at the University of Nevada, Reno where scientists started to grow hundreds of the buckwheat’s seedlings in a greenhouse and replicate the harsh desert conditions to find out whether it would be possible to transplant them in the wild.

Ioneer also agreed to stop any new exploration at Rhyolite Ridge in January after the Center for Biological Diversity filed a lawsuit against the Bureau of Land Management for its permitting process.

In 2019, the center also filed an emergency petition to the U.S. Fish and Wildlife Service on Monday to protect Tiehm’s buckwheat under the Endangered Species Act.

In late July, the Wildlife Service announced that there’s enough scientific evidence that Tiehm’s buckwheat could go extinct – a statement that could warrant a year-long review process of whether to list them as endangered species.

The agency agreed that the buckwheat faces a potential threat from the destruction of habitat by mining in addition to invasive species, livestock grazing, and climate change, among other things.

According to the Center for Biological Diversity, the entire species of Thiem’s buckwheat lives on under 21 acres and has between 20,000 and 40,000 individual plants.