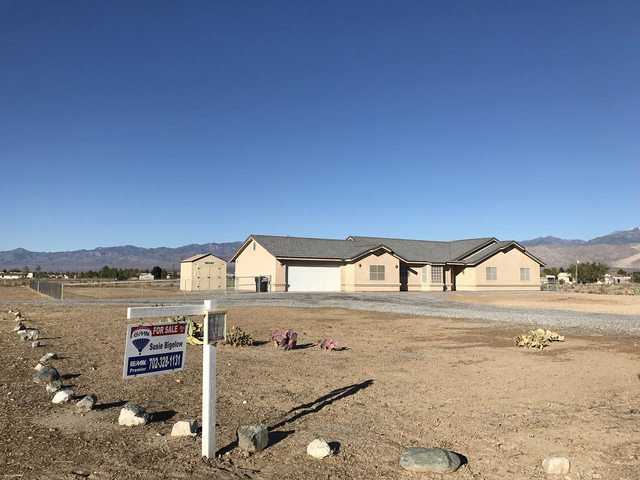 Home sales in the valley jumped a considerable amount over the previous year in September, with 44 single-family units being sold, according to the Greater Las Vegas Association of Realtors. That is up from 29 for the same month last year. Mick Akers/Pahrump Valley Times

Home sales in the valley jumped a considerable amount over the previous year in September, with 44 single-family units being sold, according to the Greater Las Vegas Association of Realtors.

The 44 units sold is a 52-percent increase over 29 single-family units sold the same month last year. The average price a home was sold for dropped some this year, as the $178,897 average seen in September is below the $185,947 mark during the same month in 2015.

Kim Washington, owner of Access Realty concurred with GLVAR, said that she has seen an increase in the number of homes sold.

“Yes, I’ve seen the market pick up,” Washington said. “I think because of the strengthening economy and the jobs that are coming out. The economy has been picking up and people are able to buy now.”

With that being said, Washington explained that the lower average price a home sold for compared to last year was due to buyers being tentative due to the election season.

“I think the election scared some people,” she said. “Not too much, but at least a little. That’s what I’m hearing from my clients.”

After the election takes place on Nov. 8, Washington foresees the real estate market continuing to strengthen, as area projects in the mix could drive more residents to town.

“I think that the stadium and the solar projects and the building going on, I think we’re just going to get stronger,” she said.

With September’s total included, the Pahrump Valley has seen 339 single-family homes sold so far this year, which is above the mark seen through September 2015 of 302 homes.

GLVAR said there are 325 single-family homes for sale in the valley. For the size of the market, that is in opposition to the trend from the rest of Southern Nevada.

“Our housing supply has been tight for a long time, especially for homes in lower price ranges,” said GLVAR President Scott Beaudry. “We have less than a three-month supply of homes available for sale (in Southern Nevada) when a six-month supply is considered to be a balanced market.”