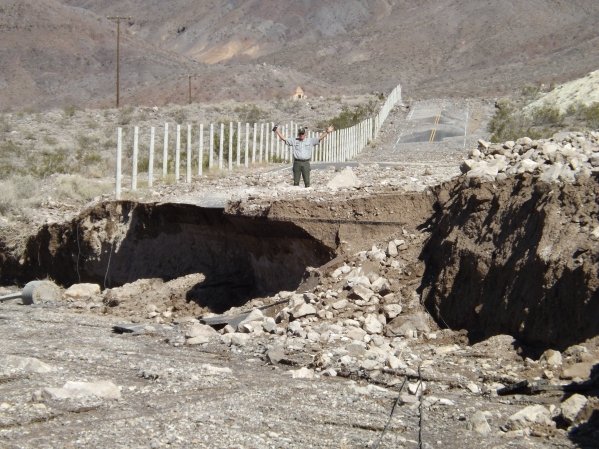 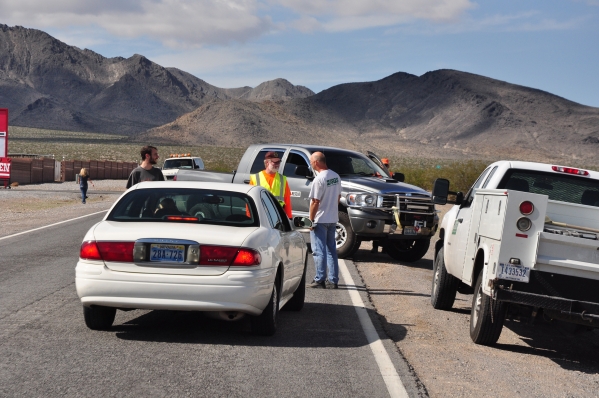 All the main roads into Death Valley from Pahrump were closed Monday due to flooding and mud after the severe rainfall over the weekend.

On Monday morning, Death Valley park workers who live in Pahrump said they tried to get into the park through Bell Vista Road and found it closed.

“My drive to work normally takes 45 minutes but on Monday it took three hours,” a Death Valley worker said.

Southern Nye County Search and Rescue volunteer Jay Davis, manning the roadblock on Bell Vista Road at Valley’s Edge Country Store, said close to 300 people had been turned away as of noon on Monday afternoon.

Tourists who were blocked from entering the park expressed their frustration.

“We had planned this trip for days and we wanted to go and see Zabriskie Point, but now our trip is ruined,” said Tobias Schwarz, a German tourist.

Death Valley said the park was still open, despite many of the roads into the park being closed.

The park said rangers are currently checking all roadways to assess conditions and make sure that all visitors are safe with California Highway Patrol flying over remote areas.

Although the water has subsided and Bell Vista was opened on Tuesday, the national park suggests people check the California Department of Transportation for any further road closures.

On Monday, Ash Meadows and the Amargosa Opera House were cut off because of the road closure. Water more than two feet deep covered Bell Vista near the Ash Meadows turnoff.

Two people driving a jeep got caught in rushing floodwaters and were trapped on Sunday night. Fire personnel attempted to get to them with no success. The Nye County Sheriff contacted Las Vegas Metro, requesting helicopter rescue assistance. The helicopter unit responded and conducted a hoist rescue of both persons who were turned over to Nye County Sheriff’s deputies and medical. There were no injuries.

“The flash flood knocked down over 20 power poles, damaged a water treatment facility, the road and deposited approximately two feet of mud and debris inside Scotty’s Castle visitor center,” Death Valley said in their press release. The park said no other structures in Death Valley reported damage and the Scotty’s Castle area will remain closed for at least several months.