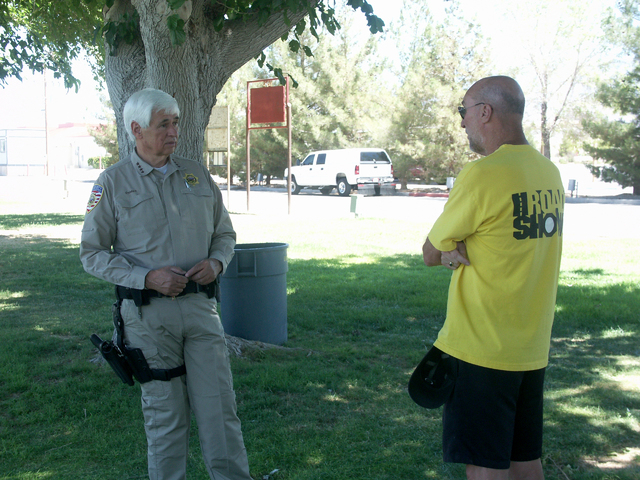 Nye County Sheriff Tony DeMeo on Thursday did not mince words while talking to the organizer of this weekend’s Spring Mountains Run motorcycle rally at Petrack Park.

The inaugural event put on by Roadshows Inc., is expected to draw hundreds of the finest custom and stock bikes from across the country.

The sheriff, who has had strong reservations about the event from the beginning, said his concerns focus mainly on how the sheriff’s department will respond in the event of an incident where scores of bikers from different clubs begin to “rumble” on a large scale.

“We got a list of the likely motorcycle clubs that will be coming in and several of them are competing clubs that are actually on the homeland security list. They have been known to cause violence and we obviously don’t want that,” he said.

The sheriff said that he believes town officials erred in agreeing to provide security for the event when the contract was approved months ago.

“We were hoping that there would be some sort of a security plan. According to the contract, security was to be provided by the Town of Pahrump but they failed to do that. It’s my understanding that they are counting on Search and Rescue, who are doing the parking lot detail. They are not security and they are not trained in any capacity of law enforcement,” he said.

Additionally, on the issue of manpower, DeMeo said his department is drastically understaffed.

“We don’t have the manpower and the county doesn’t have the money for this event. The town that authorized the event has money. We don’t know if there’s going to be any issues, but we are preparing for it. The three officers that are on duty for the weekend are SWAT members and I have directed them to come out in their SWAT equipment. Myself and a couple of other individuals will be out as well in case we have an issue,” he said.

As a result of the apparent security snafu, DeMeo warned that the town will be held accountable if the event turns into a violent “free for all.”

“With the town being advised that they needed security but didn’t provide it, will be litigiously responsible if there is any kind of problem. They call the Search and Rescue doing parking lot detail security,” he said.

As a response to DeMeo’s concerns, Roadshows Inc., organizer Randy Burke pointed out that today’s bikers and motorcycle enthusiasts should not be compared to the notorious biker gangs of years past.

He noted many of his associates and those who plan to attend the weekend event are professionals who enjoy an occasional weekend ride.

“I think that’s part of the mystique of motorcycling. During the weekend at big events, some of the doctors, lawyers and candlestick makers kind of embrace that bravado of lore. It has kind of carried on from year to year that the bikers are big and bad, when in reality, it couldn’t be further from the truth,” he said.

The three-day event begins today and participants can register to take part in all of the events, including poker runs, contests and VIP parties.

Burke said free entertainment will be provided at the venue throughout the day, while vendors will sell merchandise and food.

“We are doing great on the vendors side. Right now, we have between 35 to 40 vendors. These are not your 10 X 10 craft vendors. Some of our vendors are 50 to 60 feet or longer. We are still accepting more vendors. They can come Friday, Saturday, or even Sunday, though I’m not sure why they would just come in on Sunday,” he said.

The organizer said it’s hard to gauge how many visitors will come to the event due to its lack of history in the Pahrump Valley.

Locations such as Reno and Virginia City, where the event is held each year, attract thousands.

“We have worked very hard on marketing to the motorcycle enthusiast and not necessarily the lifestyle bike riders. They are staying in local hotels and spending money at restaurants. We have 25 business in Pahrump who have all bought into the program and I have six major sponsors. For a first year event, to have that many sponsors and supporters is incredible,” he said.

The Spring Mountains Run kicks off today from noon to 9 p.m. with an after party to follow for those who purchased VIP passes.