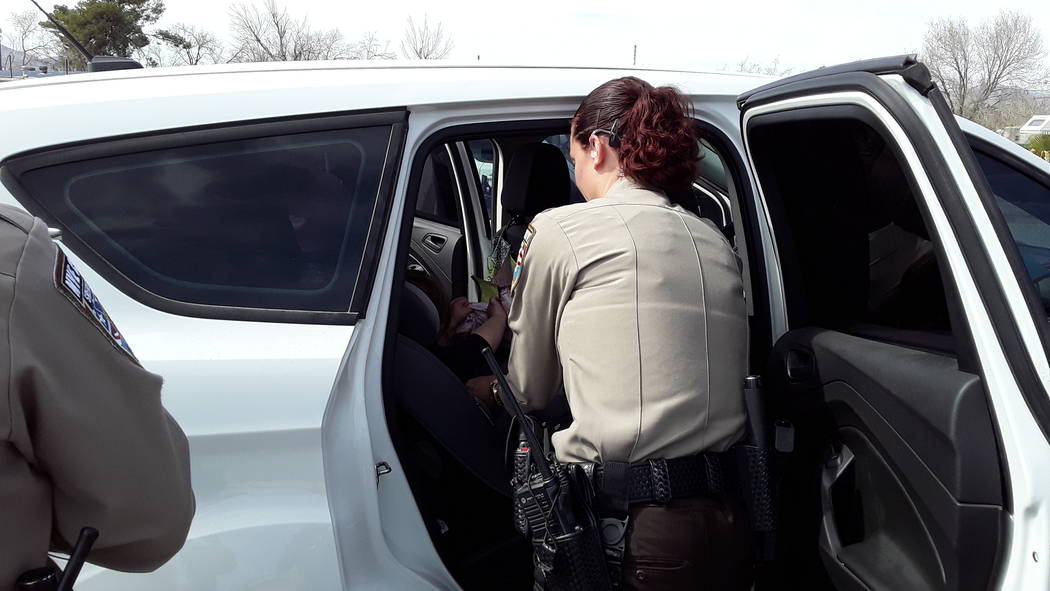 Selwyn Harris/Pahrump Valley Times After numerous attempts, a Nye County Sheriff's deputy safely removes a toddler from a vehicle after the child accessed the key fob and locked herself inside. 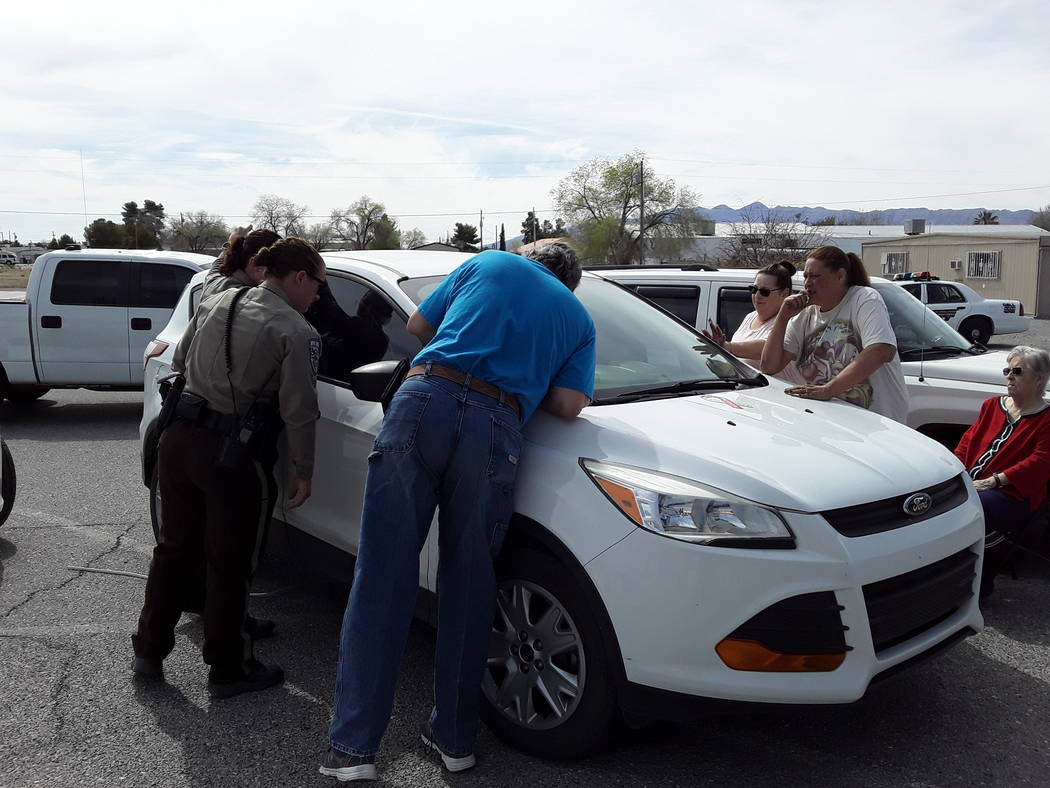 Selwyn Harris/Pahrump Valley Times Members of the Pahrump Moose Lodge 808 offer sheriff's deputies suggestions on how to unlock the the door of the SUV. 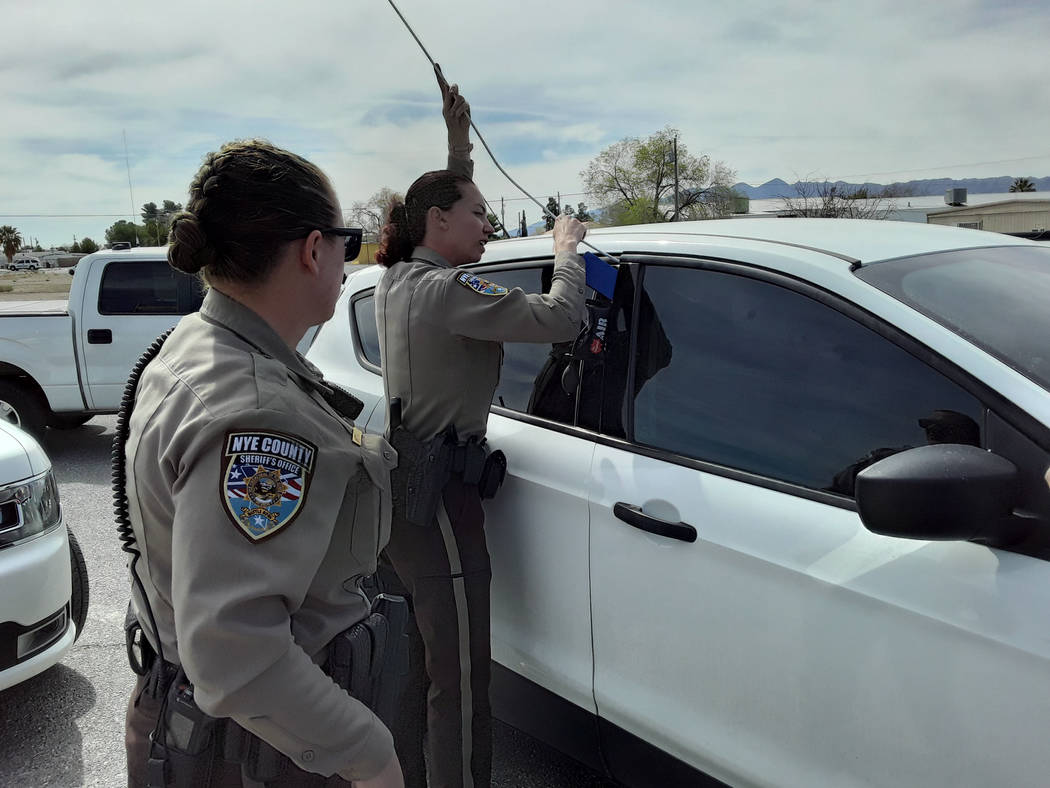 Selwyn Harris/Pahrump Valley Times Sheriff’s deputies utilized what’s known as an “Air Wedge” device and long rod in an attempt to unlock the passenger-side door to free the child. Though the task took roughly a half hour, the child was freed safe and sound.

While out running errands on Friday March 6, an aunt and a great grandmother’s excursion took an unusual twist while babysitting a 2 year-old girl.

The three were dropping off items for the Pahrump Moose Lodge’s yard sale when the toddler got a hold of the car key fob of the late model Ford SUV, and locked herself inside the vehicle, at approximately 10:45 a.m., the aunt said.

Turns out, after all of the doors were shut, the toddler pushed the lock button on the key fob, essentially locking herself inside the vehicle.

Upon arrival, a sheriff’s deputy utilized what’s known as an “air wedge” device and long flexible rod in an attempt to unlock the passenger-side door and free the child.

Unfortunately, the power door lock was positioned, where the deputy could not get the proper angle and leverage to immediately unlock it, as more than a half-dozen Moose Lodge members looked on, all the while offering up suggestions on how to get the door open.

It should be noted that during the deputy’s efforts, the child pushed the panic button on the key fob which activated the blaring sound of the vehicle’s horn.

After numerous attempts to find the perfect angle and leverage, a second deputy arrived on scene, and requested the sheriff’s office dispatcher to contact a locksmith.

Unfortunately, after calling a local locksmith business, the dispatcher advised the deputies that the call went directly to voicemail.

It was even suggested to break one of the windows of the vehicle, but low and behold, after roughly a half hour, the deputy eventually found the perfect angle and was able to finally unlock the door, as Moose Lodge members loudly cheered the deputy’s unwavering efforts.

Though the toddler was a bit flush in the face, she was no worse for the wear after drinking a cold bottle of water, with a very curious expression on her face.

The child’s aunt meanwhile, said she learned a very valuable lesson from the ordeal.

“Normally I don’t let her hold the key, but as I was putting her in, she took the key,” the aunt said. “She punches buttons all the time at home. We don’t have another key, so we do need to get an extra key, and thank goodness it wasn’t hot today.”

When asked whether she would provide her name, the aunt’s reply was short and to the point.

“If you use my name about this, I would probably get run out of the county,” she said.

Ironically, the model of the SUV is the popular Ford Escape, believe it or not.

The Women of the Moose in Pahrump area also having a bake sale.