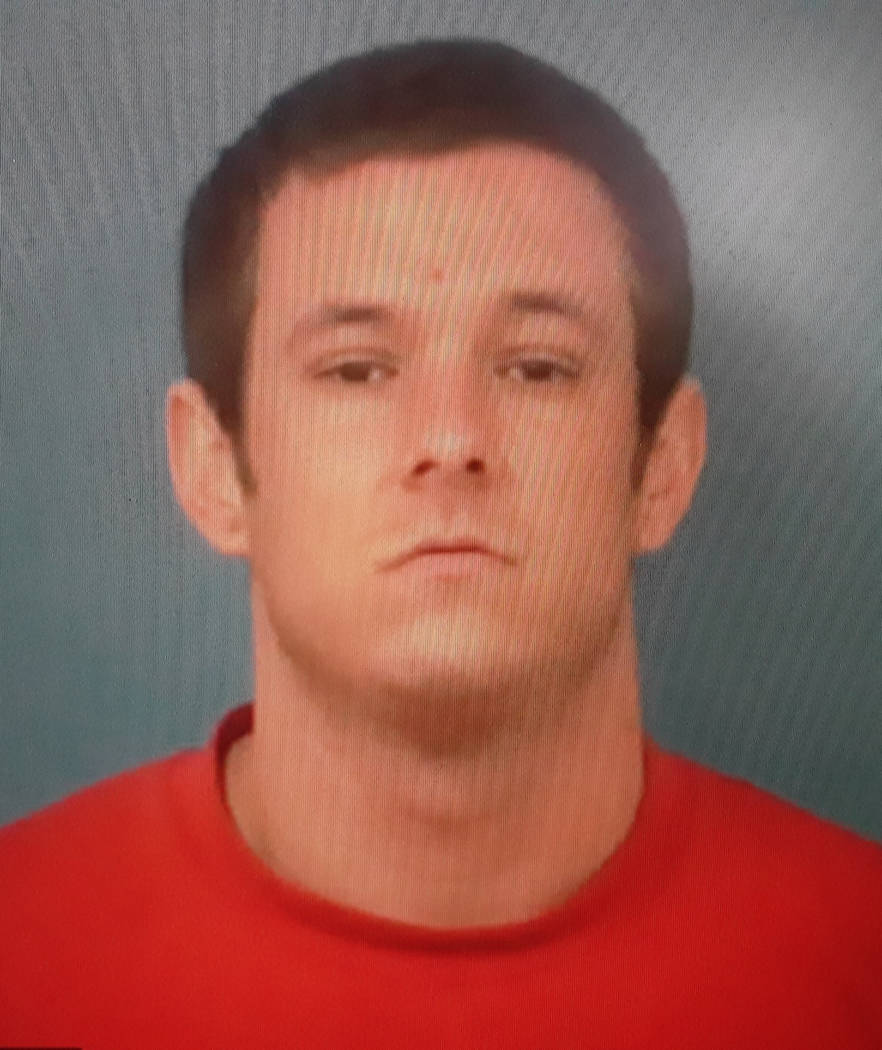 Special to Pahrump Valley Times Pahrump resident Lucas Partain, 24, was taken into custody following his arrest on suspicion of robbery at approximately 2 a.m. on Monday February 24. 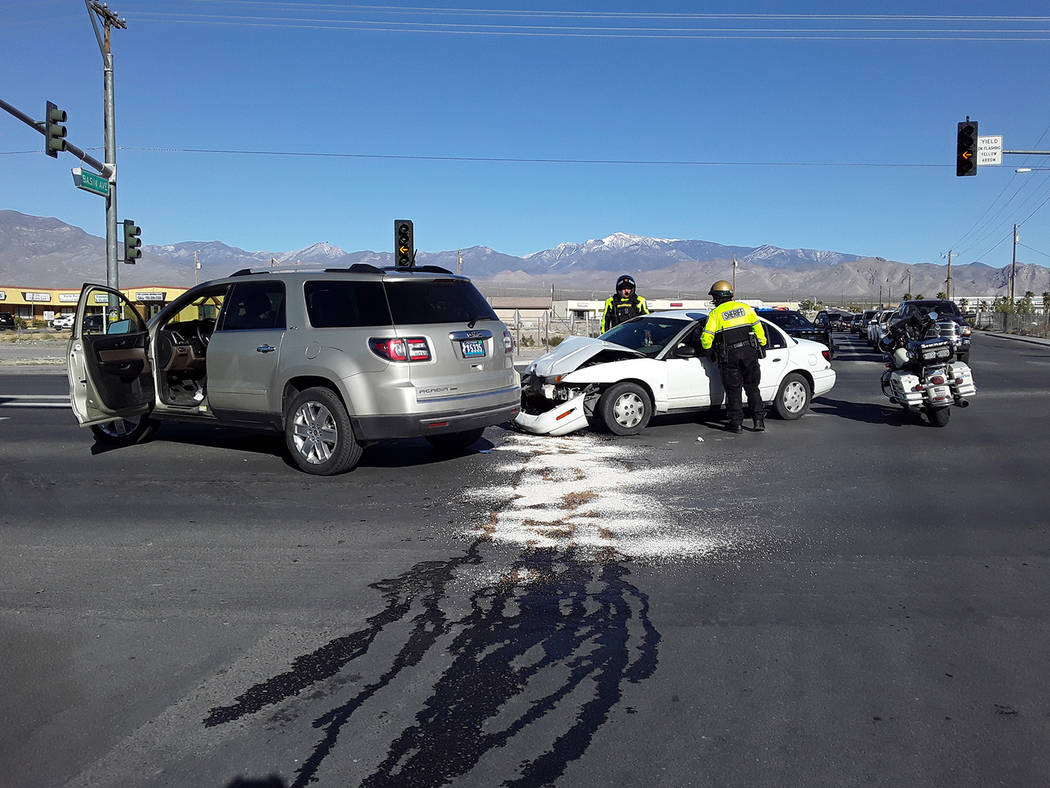 Selwyn Harris/Pahrump Valley Times Southbound lanes of Highway 160 were blocked off following a two-vehicle crash just after 3 p.m., on Monday Feb. 24. One person was transported to Desert View Hospital. 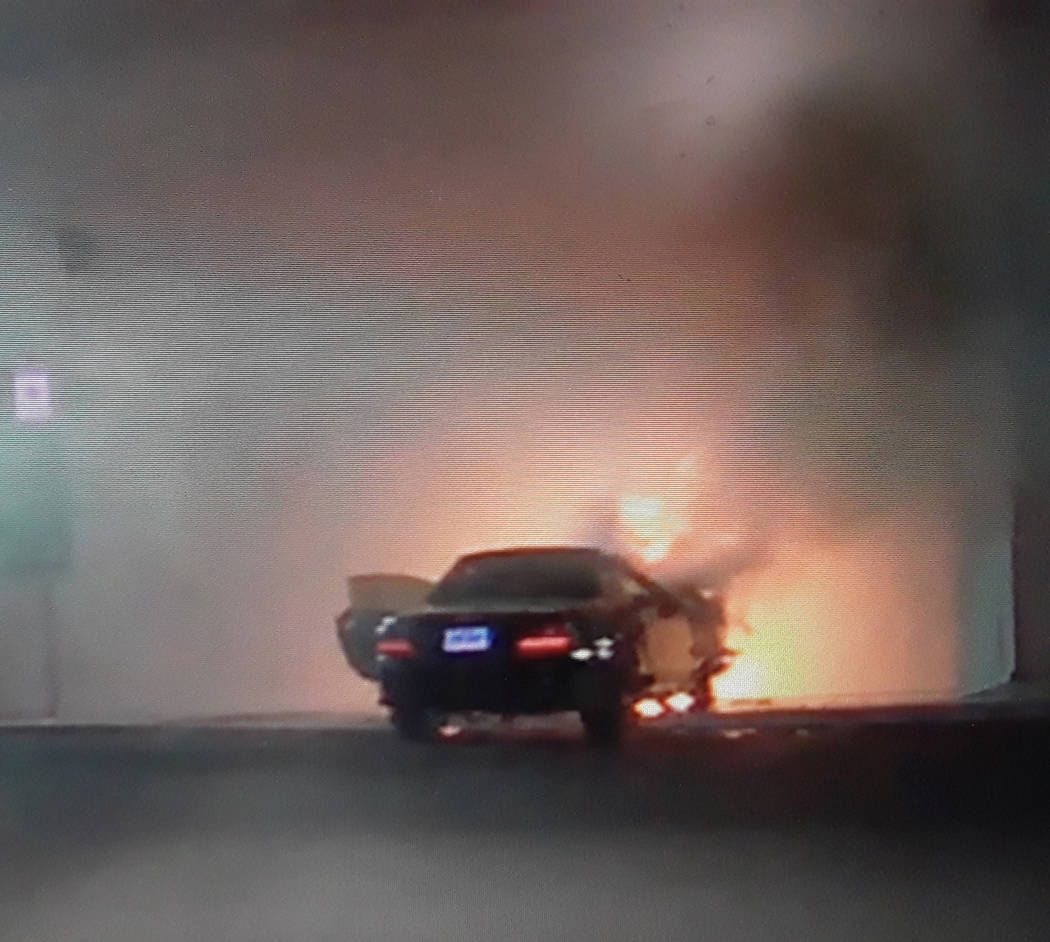 Special to the Pahrump Valley Times An unidentified man succumbed to injuries at UMC Trauma in Las Vegas, after the vehicle he was driving struck the Healthcare Partners Urgent Care facility on Loop Road this month. Nye County Sheriff's Office Deputy Xavier Gideon pulled the man from the vehicle moments before it burst into flames.

As stated in a Nye County Sheriff’s Office video news release, the man, identified as Lucas Partain, 24, entered the store on Highway 160 at approximately 2 a.m. on Monday, Feb. 24.

“It was reported that the suspect had attempted to buy cigarettes from the gas station employee,” Horak said. “When asked for payment, Partain held up a note, advising the employee that this was a robbery and ordered the employee to empty the register.”

Horak also noted in the video statement that during the interaction, Partain allegedly reached into his jacket, as if to reach for a gun.

“After the employee acted as if they also had a gun, Partain grabbed the items and left the store without paying,” Horak said. “At approximately 7 a.m., deputies located Partain at the Winery Supermarket on Highway 160 and Winery Road. Partain was arrested and booked into the Nye County Detention Center, where he was charged with robbery.”

Deputies also responded to an officer-involved shooting behind Walmart on Dahlia Street in the early morning hours.

Capt. David Boruchowitz said no officers or suspects were injured during the incident.

“We have several people in custody and we are continuing the investigation,” he said, via a video news release.

A press conference is planned for Friday, according to the sheriff’s office.

A man has died from injuries sustained after his vehicle struck a medical facility earlier this month.

As stated in a Nye County Sheriff’s Office video news release, the crash occurred at approximately 11:30 p.m. on Feb. 11, where a sheriff’s office deputy removed the man from the vehicle just before the vehicle burst into flames.

The release went on to say that the male was transported to Desert View Hospital, and later flown to University Medical Center Trauma in Las Vegas. Despite the efforts of the deputies at the scene, the driver was subsequently pronounced deceased.

Due to the fact that the man died at UMC, his death is being investigated by the Clark County coroner’s office.

“I commend the swift, decisive, and heroic actions of Deputy Xavier Gideon as he attempted to save this man’s life,” said Nye County Sheriff Sharon Wehrly.

One person was transported to Desert View Hospital following a two-vehicle collision at the intersection of Highway 160 and Basin Avenue on Monday, Feb. 24, just after 3 pm.

Southbound lanes of Highway 160 were blocked off and detoured onto westbound Basin Avenue, as first responders worked to clear the scene. Nye County Sheriff’s Office Auxiliary units assisted with traffic control. The Nevada Highway Patrol is investigating the exact cause of the collision.

A motorcyclist has died from injuries sustained following a crash last Wednesday, Feb. 19.

The rider was identified as Berna Quackenbush. “The single motorcycle rider was headed northbound and passed a vehicle heading westbound to turn on Indole Street,” Horak noted. “The motorcycle rider clipped the vehicle and exited the roadway. The rider then struck a culvert and a brick driveway.”

Horak went on to say that deputies, Nevada Highway Patrol, and Pahrump Valley Fire and Rescue Services crews arrived on scene where Quackenbush was transported to Desert View Hospital, and later succumbed to her injuries.