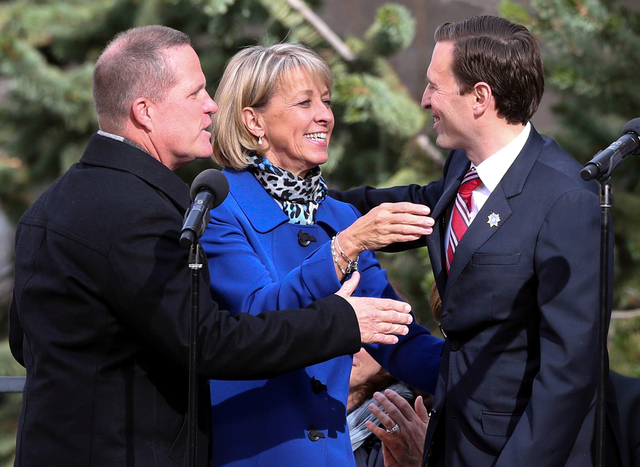 The last couple of times Barbara Cegavske backed bills in the Nevada Legislature to require voters to show photo identification to cast ballots, the proposed legislation didn’t make it out of committee.

Democrats blocked voter ID legislation in 2007 and in 2009, when Cegavske supported such bills, and beyond. Even when Republicans ran the state Senate in the past, the idea was rejected because of the potential cost of providing photo IDs to people who might not already have a driver’s license or some other form of identification.

With Cegavske’s 2014 election as Nevada’s secretary of state and with Republicans in the majority in both houses of the Legislature for the first time in decades, Cegavske said she’s optimistic she finally will see a voter ID requirement become law. The Republican mentioned voter ID on the day of her swearing-in, making it a top priority.

“Cegavske is a proponent of showing identification at polling places and will continue efforts to maintain the integrity of Nevada’s elections,” her office said Jan. 5 as she became Nevada’s 17th top election official.

GOP Gov. Brian Sandoval also has expressed support for voter ID, making it likely he would sign a bill into law.

Laws requiring voter IDs and tightening up other election rules have been sweeping the county as more Republican governors and lawmakers win election and as civil rights leaders protest the changes they argue could disenfranchise thousands of voters. Now, 17 states require photo IDs to vote and 19 states have non-photo ID requirements.

Under current Nevada law, voters must sign their names in an election board register at their polling places. The signature is compared with the signature on the voter’s original application to vote or another form of identification, such as a driver’s license, military identification or some other government-issued ID. If the signatures don’t appear to match, voters can be asked to show ID. If they have none, they can fill out a provisional ballot.

Details of a new plan for a Nevada voter ID bill are uncertain. Cegavske said she doesn’t plan to request a bill be written but expects to work with lawmakers who have supported such legislation in the past.

Sen. James Settelmeyer, R-Minden, said he’s discussing with other lawmakers — Republicans and Democrats — a voter ID bill since Nevada is among the minority of states not requiring such proof of identity.

“I don’t believe the idea of voter ID should be partisan,” Settelmeyer said, mentioning Democratic-leaning Hawaii as a state that has had such a law since the late 1970s, with no ill effect. “This isn’t a new concept.”

Outside of the Legislature, Cegavske said voter ID isn’t a partisan issue. While campaigning, she said voters almost always ask her why Nevadans don’t have to show photo identification to ensure “voters are who they say they are.”

“It didn’t matter what party you were with, everybody was very supportive of voter ID,” Cegavske said of her encounters with voters this past year. “People want assurances. … It has to do with the integrity of the elections.”

Still, voter ID efforts in the Legislature largely have broken along party lines — the GOP in support and Democrats opposed. During the 2013 session, for example, Democrats rejected at the committee level former Secretary of State Ross Miller’s proposal to start an electronic poll book that would allow clerks to compare voters at the polls to ID photos kept by the DMV or elsewhere. Voters wouldn’t have to show photo IDs, argued Miller, a Democrat, and the burden would be on the government to take photos at polling sites, if necessary. Cost estimates, however, ranged from less than $1 million to as much as $7 million, depending on new equipment.

During testimony on SB315, a voter ID bill Cegavske co-sponsored in 2009, Carson City’s county clerk, Alan Glover, estimated some 95 percent of Nevadans have some form of photo ID. The remaining 5 percent could get them at the DMV for around $20, he said.

Because it’s unconstitutional to charge voters a “poll tax,” the state or counties would have to pay for IDs for voting. Cegavske said she doubts it would cost much new money as the DMV already provides such cards for free to the homeless or recently released prisoners.

“I just don’t see who’s going to be suppressed from voting,” Cegavske said in an interview. “They keep thinking there’s something sinister about this, and there isn’t,” she added, referring to critics of voter ID requirements.

THE CASE AGAINST ID

Opponents of voter ID maintain that requiring photo identification puts too great a burden on voters, particularly those who are poor, elderly, minorities or who have other disadvantages — groups who often trend Democratic in elections.

Laura Martin, communications director of the Progressive Leadership Alliance of Nevada, mentioned Texas as a state where a strict voter ID law kept an estimated thousands of voters from the polls in 2014. The U.S. Supreme Court allowed the Texas law to be enforced, although Justice Ruth Bader Ginsburg angrily dissented, saying voter fraud was not a real problem in Texas and the law seemed “purposefully discriminatory.”

“There were only two in-person voter fraud cases prosecuted to conviction in Texas” from 2002 to 2011, Ginsburg wrote, while it has been estimated the law could disenfranchise approximately 600,000 mostly black and Latino voters.

The Nevada secretary of state’s office announced only two voter fraud cases in 2014, including one involving an illegal immigrant in California who also cast ballots in Nevada in the 2008 and 2010 elections.

“Unless you can prove to me there are millions of Californians driving to Nevada and voting, that kind of fraud just doesn’t exist,” Martin said. “We don’t want there to be additional” obstacles to voting, she added. “If Sandoval wants to sign a voter ID bill, what he’s saying is funding voter disenfranchisement is more important than funding education.”

Martin said it’s ironic that some lawmakers in Nevada and elsewhere are — in her belief — pushing to roll back voter rights just as the struggle to pass the 1965 Voting Rights Act is dramatized in the movie “Selma.”

Selma “reminds us how important voting is because people gave up their lives, well being and health” to fight for the right to cast ballots, Martin said.

Zach Hudson, a spokesman for the Nevada Democratic Party, cited studies by the American Association of Retired Persons, showing 20 percent of people 65 and older lack photo IDs and that veterans’ IDs aren’t accepted by all states.

“Barbara Cegavske’s ‘voter ID’ scheme will make it harder for seniors and military families to vote and is nothing more than a blatant partisan attempt to help Republicans hold onto power,” Hudson said in a statement.

Nevada Sen. Pat Spearman, D-North Las Vegas, said she experienced voter discrimination herself while growing up in the Deep South.

“There have been times when our national conscience wasn’t geared toward equality,” Spearman said, referring to the civil rights movement to enfranchise minorities, particularly blacks. “It wasn’t even asking for ID. It was a matter of looking at somebody’s skin color and saying, ‘You don’t belong.’ ”

Spearman said her mother, for example, never drove and doesn’t have a photo ID driver’s license. She also argued that the integrity of elections in Nevada and most of the nation is good.

“Show me where there was no integrity in the last two elections,” said Spearman, a former military police officer who said there should be evidence of voter fraud or other crimes to act on voter ID. “I don’t see there’s enough evidence.”