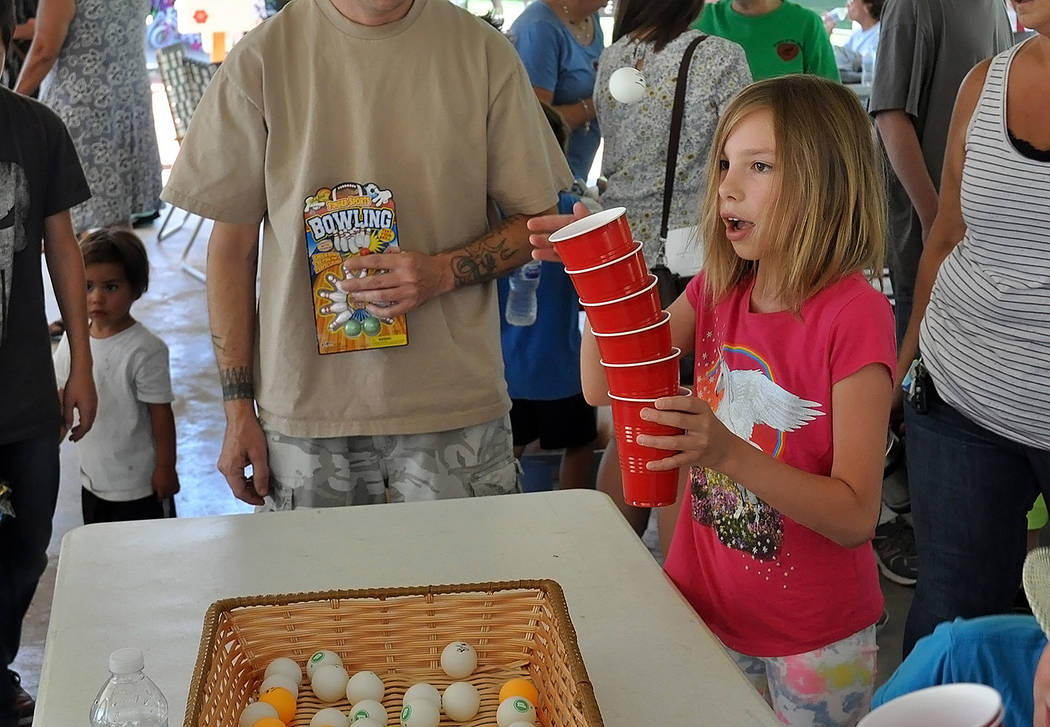 Horace Langford Jr./Pahrump Valley Times - Youngster Autumn Williams is pictured tossing ping pong balls and attempting to get them to land in a stack of plastic cups. 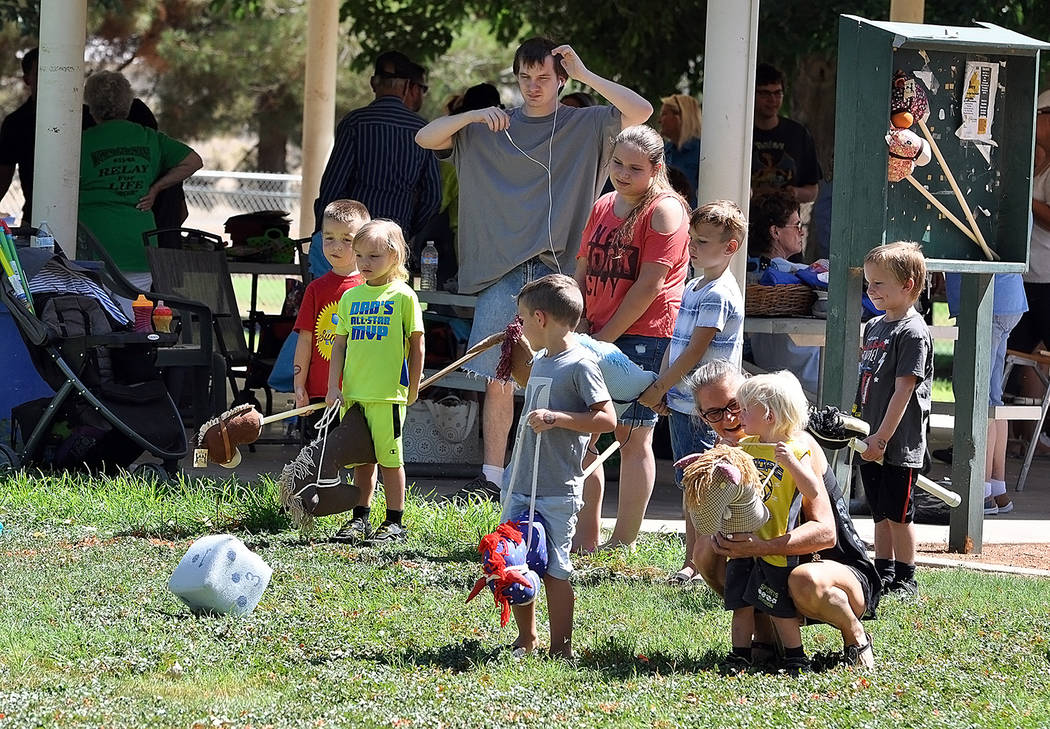 Horace Langford Jr./Pahrump Valley Times - On July 22, 2018 Smiles Across Pahrump attendees were excited to take part in the hobby horse race, just one of the many activities to enjoy that day. 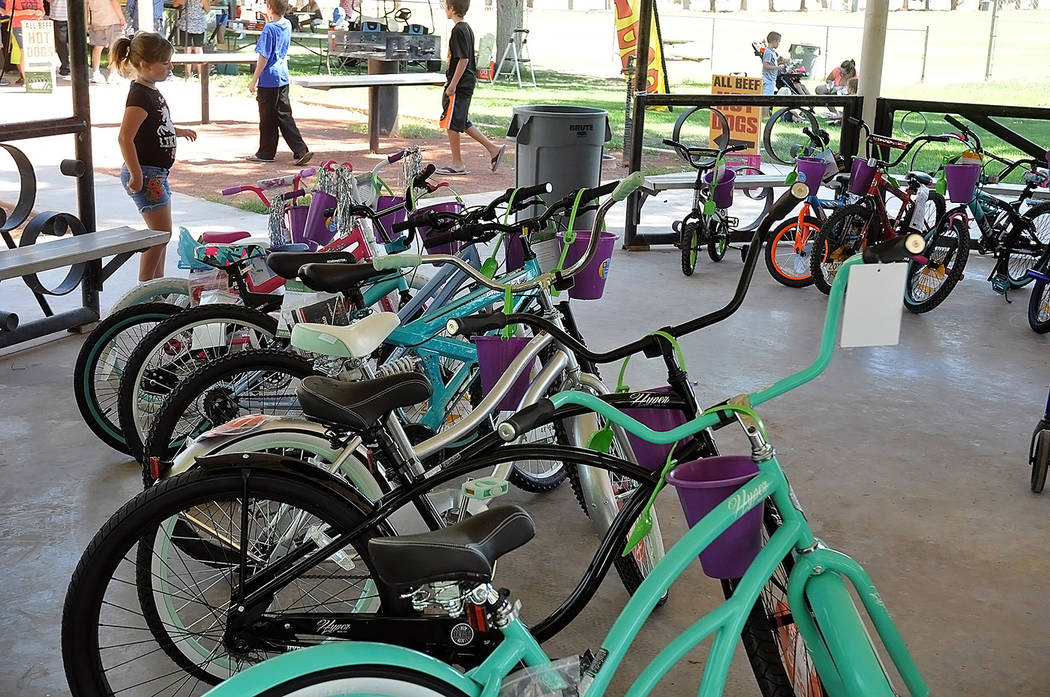 Horace Langford Jr./Pahrump Valley Times - A view of the bicycles donated to the Smiles Across Pahrump event. Children who submitted an essay on what a smile means to them were entered into a raffle for the chance to win one of the brand new bikes. 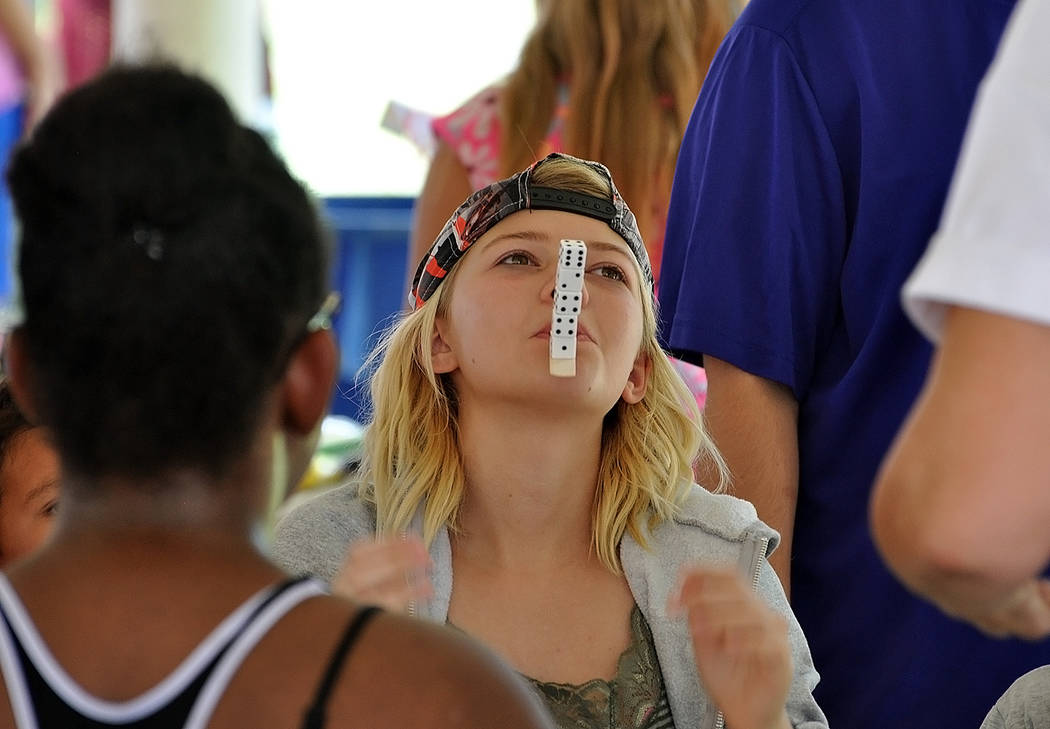 Horace Langford Jr./Pahrump Valley Times - Pahrump resident Electra Brown is seen balancing five dice cubes on a popsicle stick in one of the many fun and challenging games that were part of the Smiles Across Pahrump event. 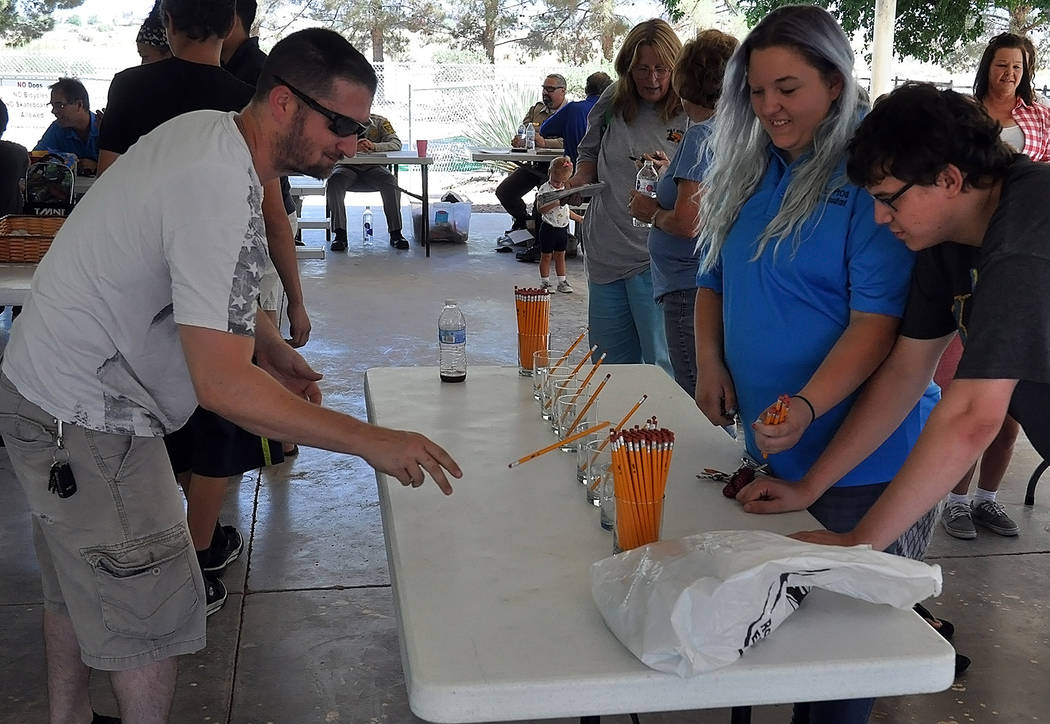 Horace Langford Jr./Pahrump Valley Times - Children were not the only ones to enjoy the games either, with adults such as Joe Ischo getting in on the fun too. 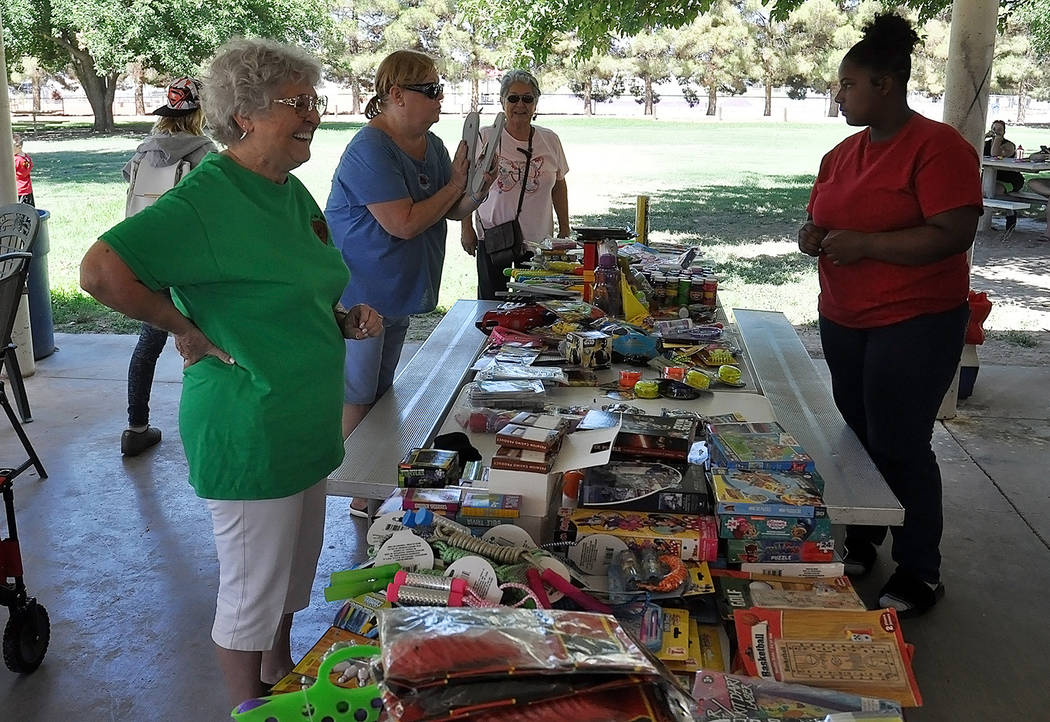 Horace Langford Jr./Pahrump Valley Times - The Smiles Across Pahrump prize table was filled with goodies, all donated and given away to local children as prizes for winning games and activities.

Valley youth were treated to an exciting and entertaining afternoon during the Smiles Across Pahrump event, with games, activities and a plethora of prizes to be enjoyed by all.

The bright smiles of beaming children and their delighted parents filled Ian Deutch Memorial Park on Sunday, July 22 as they were welcomed for free family festivities, thanks to the efforts of the sponsoring organization, the Pahrump Moose Lodge’s Women of the Moose, along with the assistance of many others.

“Smiles Across Pahrump was a tremendous success thanks to so many people. Just look at the smiles on the faces of the children who were fortunate enough to win a bike” Smiles Across Pahrump committee member and event organizer Chanda Wieland said enthusiastically, referencing the many photos evidencing the good time everyone had.

“There were 19 bikes in total given away. In order to win you had to have a ticket. To get the ticket you had to draw a picture or write an essay of what a smile means to you, in keeping with the tradition of the Smiles Across Pahrump founder, the late Butch Harper.” Wieland noted that the event was being carried on as the legacy of Harper, who was known as Pahrump’s goodwill ambassador and enjoyed nothing more than helping bring smiles to the faces of children.

Brand new bicycles may have been the most sought-after of the raffle prizes that afternoon but there were plenty of other items for the children to take home as well. Wieland explained that of the approximately 200 attendees, 66 were children who participated in the essay portion of the event and due to the generosity of those who donated to the cause, all 66 were able to leave with a special prize.

“A few anonymous donors provided over $400 worth of family-friendly board games,” detailed Wieland, who is also a Women of the Moose junior graduate regent and community service officer. “With only 66 kids in attendance that turned in the essay assignment, this meant every child went home with either a bike or board game, as well as the prizes for all the games they played before the big drawings.”

Shout-out to all involved

An event of this type and scale could hardly have been accomplished without a vast group of contributors all willing to pitch in to make it a success and Wieland was profuse in her thanks.

“First and foremost, thank you to the men and women of the Pahrump Moose Lodge, who spearheaded this community event after taking it over last year,” Wieland said with obvious gratitude. “Thanks to Jeanne’s Gourmet Hot Dogs, Tarantino’s Pizza and GolfCartNV.com, who provided the food and beverages for the day. The Pahrump Valley Gunfighters gave a gun safety presentation and the Nye County Sheriff’s Office Auxiliary provided fingerprinting ID for the participants.”

Thanks were also extended to TJ’s DJ and KJ, which provided the music, the Nye County Sheriff’s Office Explorers and motorcycle deputy Gary Curtin, who came with information material for the kids and Glen Lerner, for the donation of bike safety coloring books. The Moose international affiliate safesurfin.org was due gratitude as well, Wieland remarked, for the prizes sent and the pamphlets provided to parents filled with information on safe web surfing.

“In addition to the Moose Lodge, Preferred RV, Cutting Edge Lawn Care, Li’s Surgical Center and Tom K. all provided bikes for this event,” Wieland continued. “As always, a shout-out to the wonderful members of the PVHS Key Club and other community volunteers that helped out running the games at the event.

The fire department did not make it down, and we understand things come up when booking emergency vehicles. But the kids made the best of it by running through the sprinklers in the fields beside us. If I forget to thank anyone I apologize in advance. A heartfelt thanks to everyone who came out to support us. See you next year!”

Wieland concluded that Smiles Across Pahrump was a massively successful undertaking and she was looking forward to seeing it continue long into the future. Anyone wishing to get involved in the event in coming years is more than welcome, she said.

“We estimate this event had close to 200 people in attendance and cost about $4000 to put on,” Wieland stated. “If anyone wants to help us fund next year’s event, donations can be made to Women of the Moose. Be sure to memo ‘Smiles Across Pahrump’.”