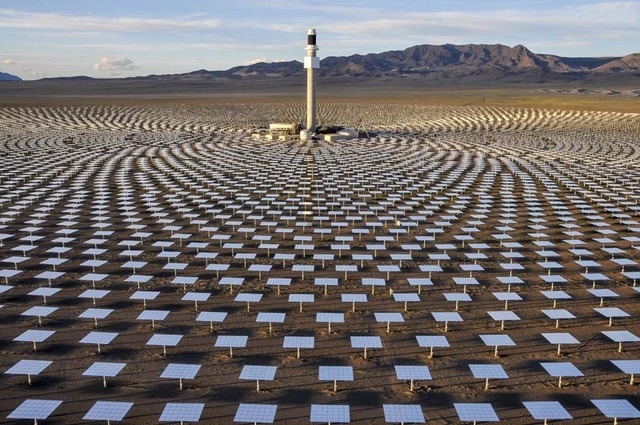 A preregulatory on-site biologist team halted operation at the Crescent Dunes Solar Energy facility in Tonopah in January after identifying a large number of birds had been killed during early-phase testing.

According to SolarReserve Chief Executive Officer Kevin Smith, testing methods have since then been modified using “innovative mitigation procedures” which have prevented any further bird deaths.

The incident occurred on Jan. 14 according to spokesperson Mary Grikas. The deaths were accidental, caused by a positioning of mirrors, which may have attracted the birds.

Grikas said the company has an avian and bat protection plan in place which reduces the potential for avian and bat mortality. The plan, she said, also requires the company to report and isolate mortality events and assist in compliance with all laws and regulations governing wildlife.

In accordance with their established policy, the company immediately reported the Jan. 14 incident to the Bureau of Land Management.

Smith said the circumstances surrounding the incident and implementation of new avian safety measures are being shared for industry-wide wildlife safety.

In addition to pre-planned and newly implemented safety precautions, careful site selection has resulted in little to no wildlife impacts, according to Smith. Minimizing environmental impacts is an ongoing goal for the company, he said.

Prior to construction, the facility completed all required federal and state environmental studies, including avian studies, as part of the permitting process.

The company received required approvals from all relevant state and federal agencies, including permits from the U.S. Fish and Wildlife Service, Nevada Department of Wildlife, Nevada Department of Water Resources, U.S. Bureau of Land Management, FAA, U.S. Air Force, State Historic Preservation Office, and the Nye County Board of Commissioners.

The construction of the solar facility is nearly complete. Grikas said that 95 percent of the jobs have been filled. Of that number 50 percent of operations employees are Tonopah residents. The facility is expected to be fully operation in May.