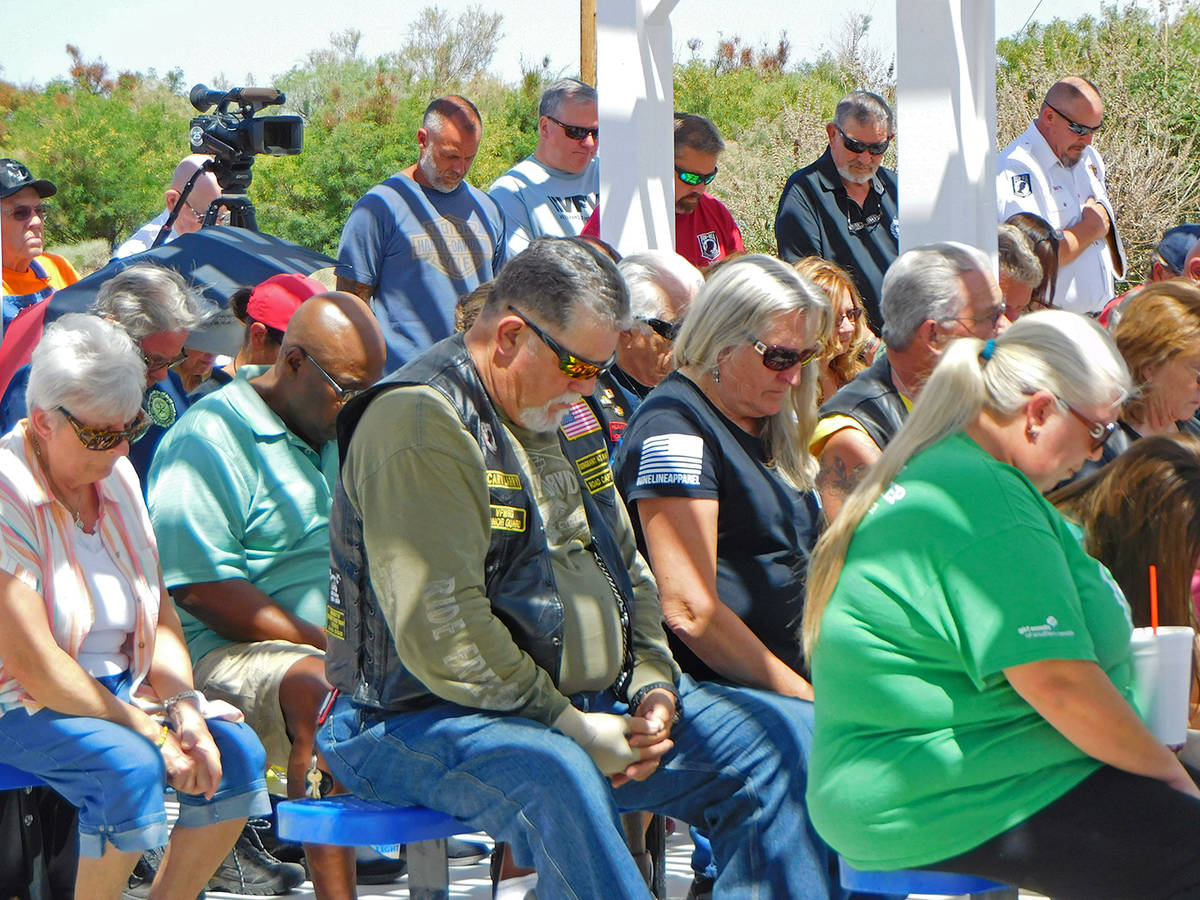 Robin Hebrock/Pahrump Valley Times Community members bow their heads in prayer during the Memorial Day service conducted at the VFW Post #10054 on Sunday, May 30, the date originally selected for the holiday. 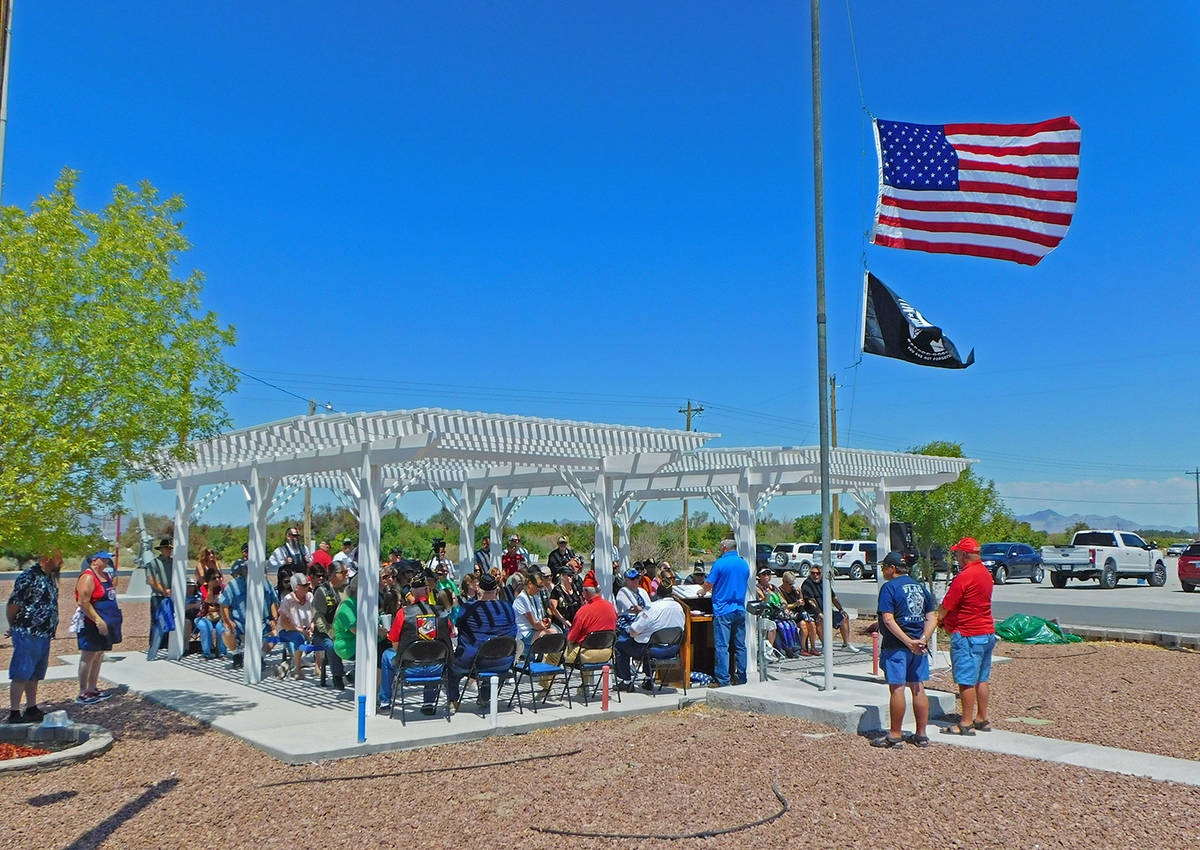 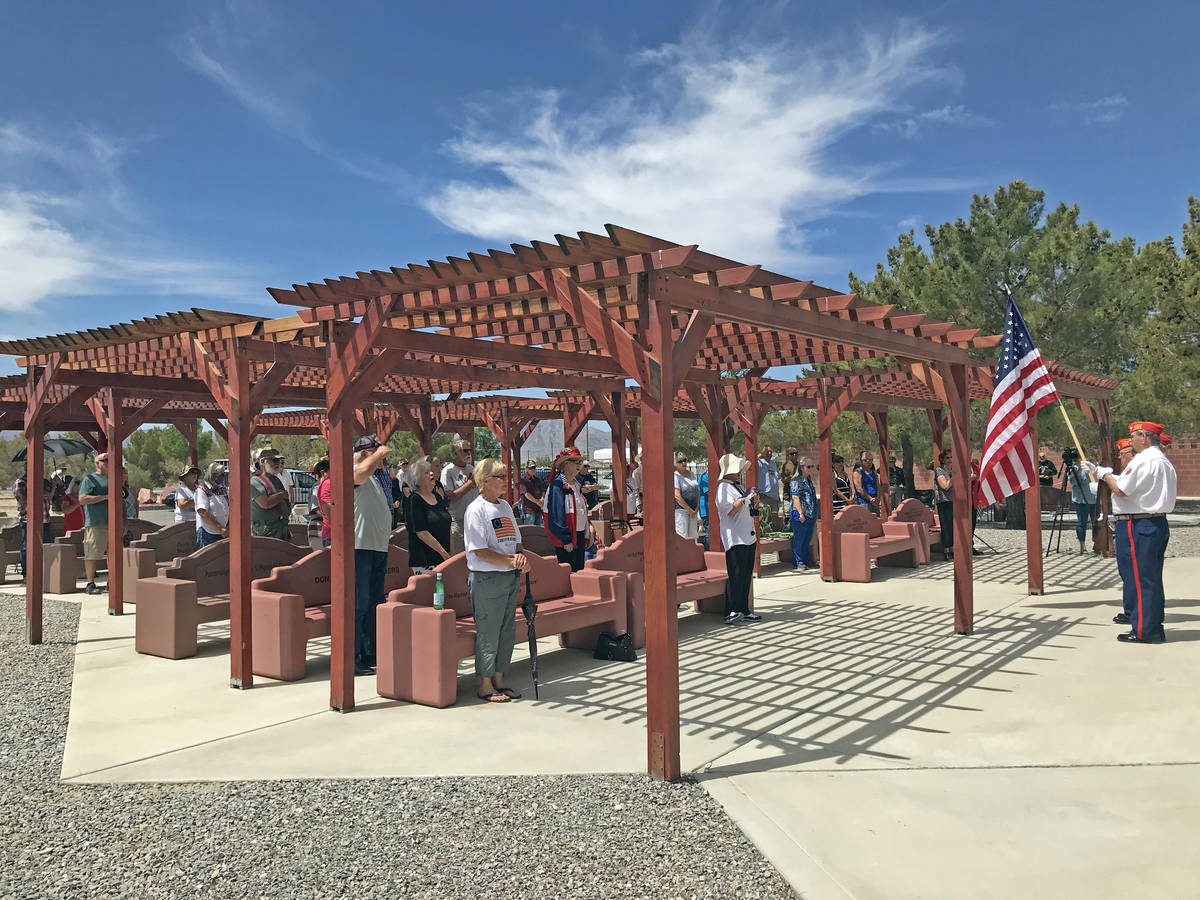 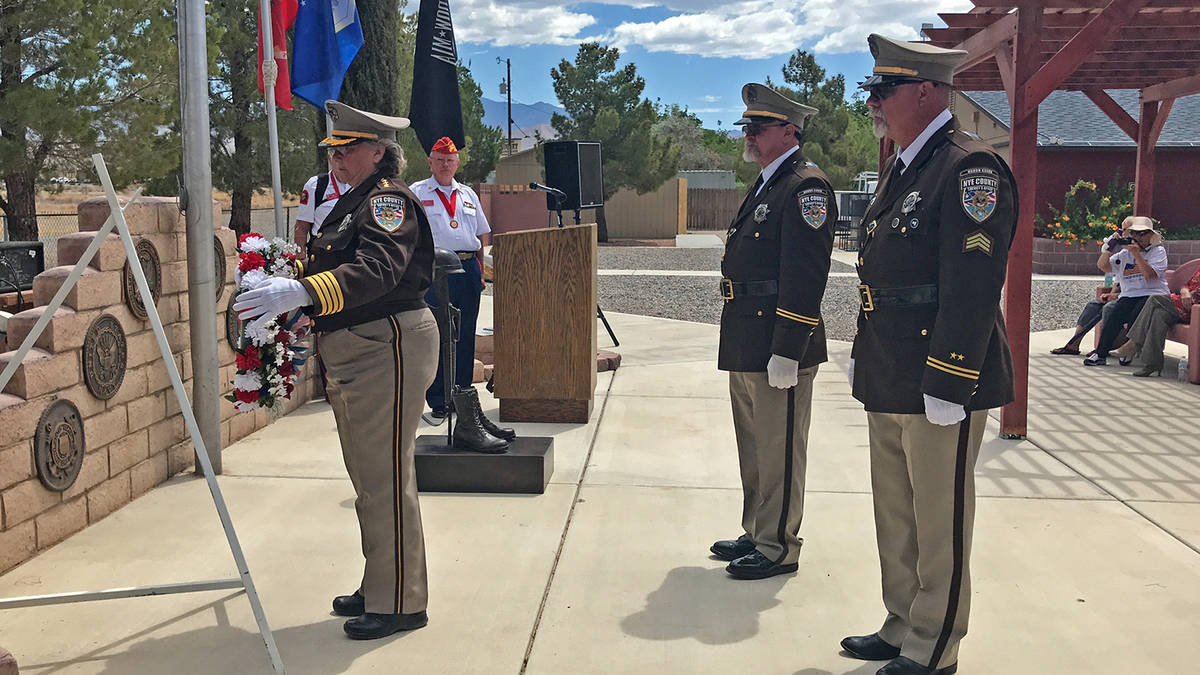 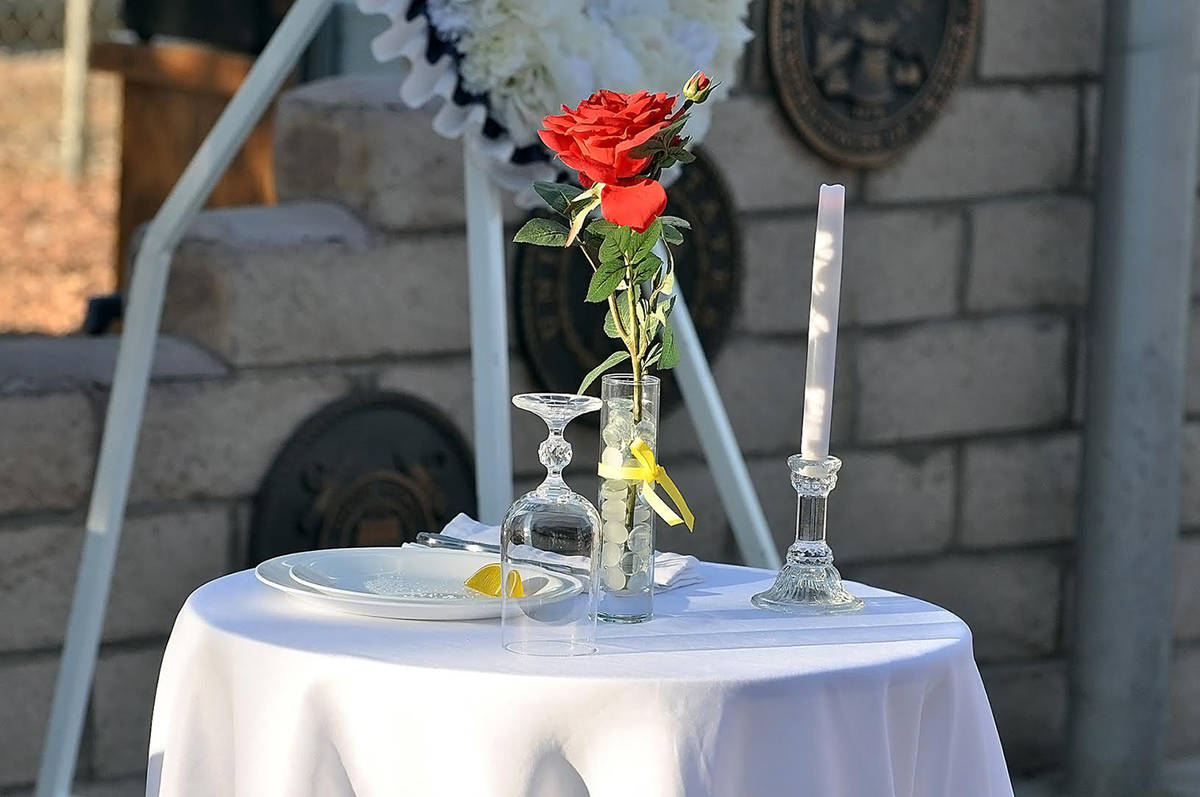 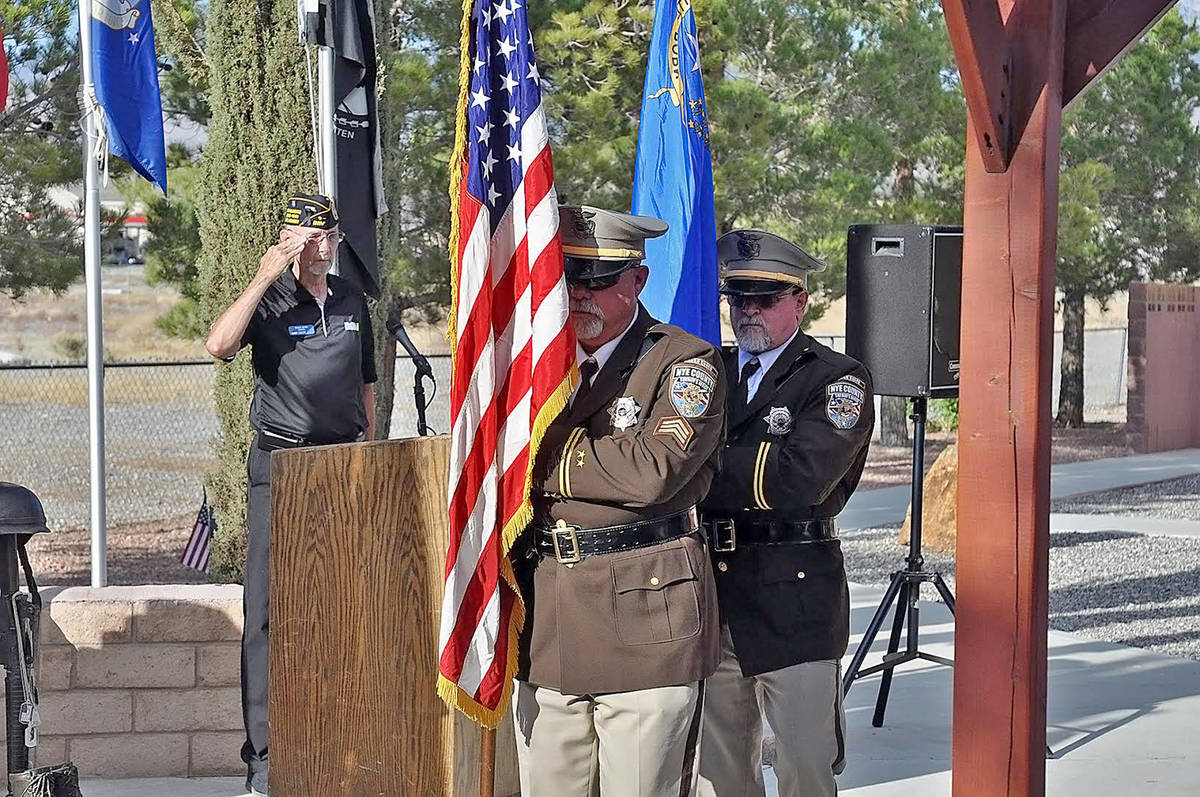 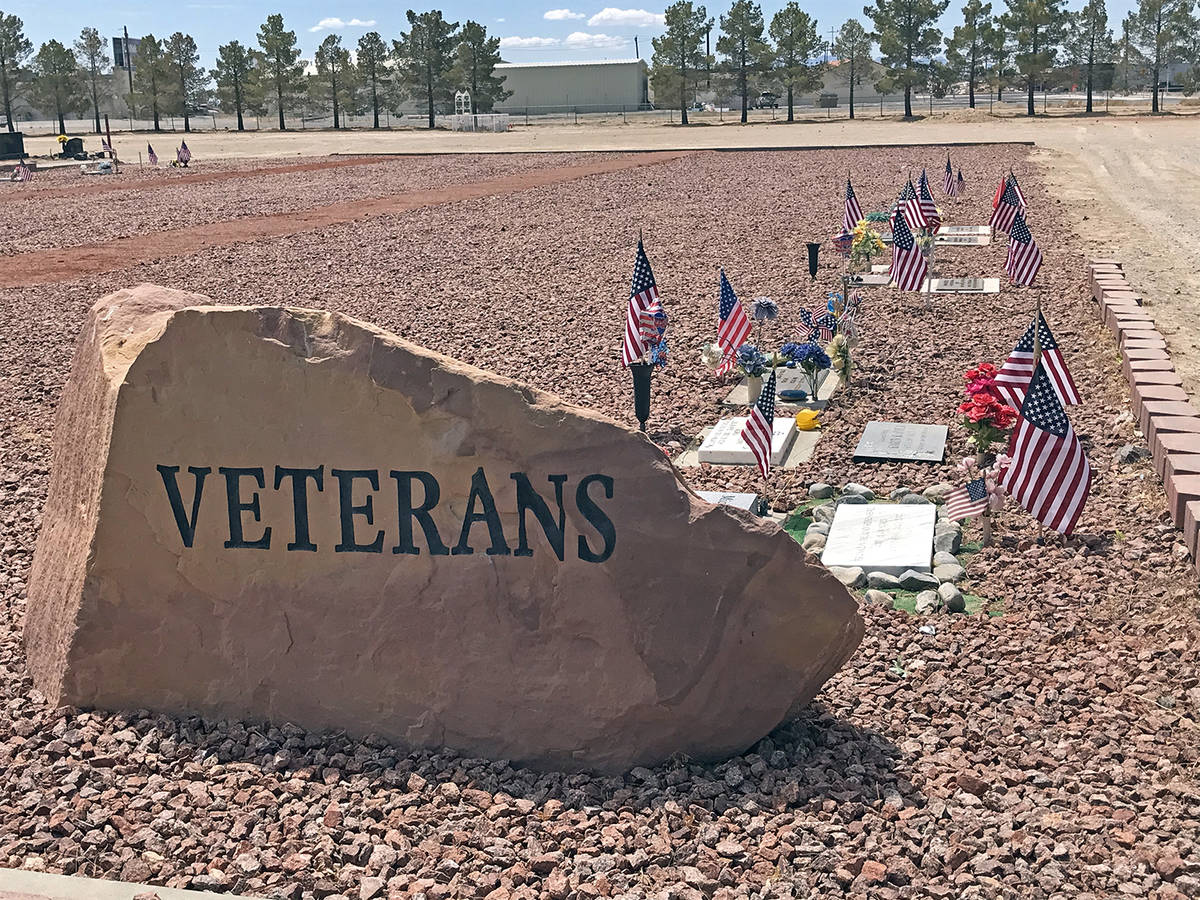 Robin Hebrock/Pahrump Valley Times The graves of former military service members were decorated with American flags for Memorial Day, thanks to the efforts of members of the Pahrump Veterans Memorial Advisory Committee, American Legion, DAV and the DAV Auxiliary.

Memorial Day in the Pahrump Valley was marked by a series of services honoring the brave men and women who made the ultimate sacrifice in their effort to help protect and preserve the American way of life and the freedoms and liberties that those residing in the U.S. enjoy today.

While many view the holiday as one that unofficially opens the summer season and calls for barbecues and family gatherings, its true meaning lies in the selfless service of those who gave all and whose memories should forever be honored.

The Memorial Day observances started off at the Veterans of Foreign Wars Post #10054, where post Commander Marty Aguiar handed the reins of the ceremony to Sr. Vice Commander Steven Kennard, who will be taking over as post commander in June, 2022.

Kennard began the service with a reading of General Order #11, an order issued by General John A. Logan in 1868, which gave life to a new holiday.

“‘The 30th day of May, 1868 is designated for the purpose of strewing flowers or otherwise decoration of the graves of comrades who died in defense of their country during the late rebellion, and whose bodies now lie in almost every city, village and hamlet churchyard in the land’,” Kennard recited.

Because of this order, when Congress enacted the Uniform Holiday Act and changed the date on which the holiday is observed, the VFW as a national organization made the decision to hold true to the originally selected date. Therefore, each year the VFW Post #10054 and indeed, posts all around the U.S., celebrate Memorial Day on its original date of May 30.

The recitation of Logan’s order was followed by a prayer from post Chaplain Stephen Hall and the changing of the flags, a solemn moment when the Star Spangled Banner and the POW/MIA flags, torn and tattered from months of flying high above the post, were removed and replaced with new flags, which were then raised to the top of the pole and re-lowered to half staff in honor of those who gave their very lives in service to the country.

“As we observe Memorial Day, we do more than just carry on a tradition dating back to 1868. We also fulfill a commitment. Throughout history, those who serve and defend, those who have faced the greatest dangers and won the greatest battles, and those who die for their country, receive the highest honors. Today, we honor our fallen. But we also embrace a feeling of honor, patriotism and pride,” Kennard said in his closing comments.

The next morning, Monday, May 31, the date of the official Memorial Day holiday in 2021, the day started off with another somber ceremony, the placement of American flags on the final resting places of veterans who have been laid to rest in the Chief Tecopa Cemetery, home to the Pahrump Veterans’ Memorial. Members of the Pahrump Veterans Memorial Advisory Committee, American Legion Post #22 and the Disabled American Veterans Chapter #15 and its auxiliary headed out to the cemetery early that morning to decorate the graves with the bright colors of Old Glory, which snapped and waved in the gentle breezes winding through the graveyard that morning.

The Marines Corps League Detachment #1199 then hosted its own Memorial Day ceremony at the Pahrump Veterans’ Memorial, which opened with a prayer from Chaplain Bruce Temple, the presentation of the colors by the MCL Color Guard, the recitation of the Pledge of Allegiance and the singing of the national anthem by Karen Elam. Temple then introduced the guest speaker for the event, Nye County Commissioner Frank Carbone.

“I’m honored to be here, as a commissioner and also as a representative of the United States Air Force,” Carbone stated. “Each year during this time, Memorial Day holiday, we pursue to honor those who have given their lives in service to our country. Remembering our fallen ones in the most responsibility for all of us, for the people who wear the uniform of this great nation. Throughout the American history, courageous men and women have answered the call to defend our country and promote peace around the world… This Memorial Day, we salute those heroes who gave their lives for a course of freedom. To them, we owe our deepest gratitude.”

MCL Commandant Danny Griggs asked Nye County Sheriff Sharon Wehrly to present the wreath before inviting MCL Judge Advocate Mike Elam to come forward to conduct the dog tag ceremony, in which military dog tags representing each of the branches of the U.S. armed forces were placed upon a statue depicting boots, a gun and a helmet. The ceremony wrapped up with a presentation of certificates of appreciation to both Carbone and Wehrly and a final prayer from Temple.

This was not the end of the Memorial Day services in the valley however, with the DAV Chapter #15 gathering at the Veterans’ Memorial at 6 p.m. Monday evening to hold its ceremony.

The presentation of the colors was performed by the Nye County Sheriff’s Office’s Honor Guard and Sarah Davis sang the national anthem before the audience recited the Pledge of Allegiance. An opening prayer from Chaplain Doug Garlin was followed by guest speaker remarks from Carbone and comments from former DAV Commander Greg Cardarelli and Wehrly. Martha Wilson-Dumont had the honor of conducting the wreath ceremony for the DAV and Jerry Dumont performed the dog tag ceremony, after which Tim Callahan read “A Quiet Time” by Stephen Pitman IV. The DAV’s ceremony concluded with the moving POW/MIA ceremony performed by Dr. Tom Waters and Wilson-Dumont and a closing prayer.