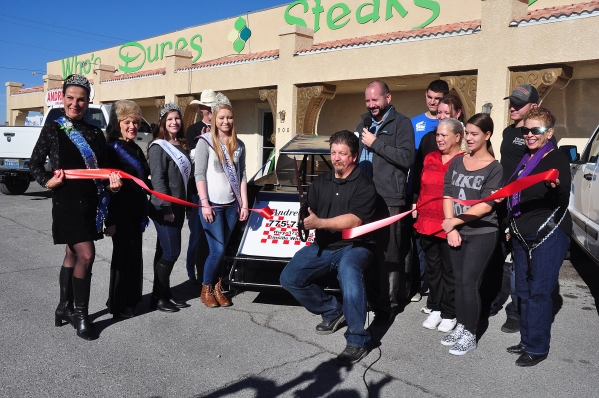 After taking over the family business after his mother was done running the place, one local businessman made a slight name change of the establishment and is ready to surge forward.

Leonard Owens, owner of Andrea’s Diner, changed the name from Andrea’s Cafe after taking over the business in late September, just as a slight signal of the new ownership.

The business just held its ribbon-cutting ceremony that added the diner to the Pahrump Valley Chamber of Commerce.

“Trying to draw more customers by working with the community,” Owens said of Andrea’s Diner being added to the chamber. “That’s certainly the plan.”

Since taking over, Owens said that business has been much of the same since before he took over the reins of the diner, but he did make a slight change in hopes of increasing business.

“It hasn’t really picked up any or dropped off,” Owens said. “We extended our business hours, we used to close at 2 p.m.”

Owens also has a full-time “day job” in addition to him running the diner, which makes it tough.

Helping ease some of the stress of running Andrea’s Diner, Owens has several family members who also work at the diner in various roles.

“It does make it easier sometimes,” Owens said of his family’s involvement. “We have seven or eight employees now.”

Among the family members are his mother, Andrea, who still works at the diner as a waitress, his wife Renee, who helps run the place while juggling her own full-time job as well, and his two sons, J.D. and Tyler, who work varying amounts.

Andrea’s Diner offers a wide variety of menu options with far more than your average restaurant in town.

“We have 89 selections,” Owens said. “Basically fish and chips and a lot of variations of hamburgers, chicken, spaghetti and meatballs, it’s pretty much diner food, in addition to a lot of breakfast selections.”

Owens takes pride in making food fresh and opts to use frozen products as minimally as possible.

“We cut our own potatoes. we don’t buy processed fries. We make our own stuff of that nature,” he said. “We try to do a lot of stuff from scratch.”

Utilizing social media is something Owens and the diner covet, as it allows them to reach their audience with no cost, supplementing their radio ads.

“My employees say that they put stuff out on Facebook and that they’re getting a response of it,” he said. “They say that social media is working out alright, as far as getting our name out there.”

After being at the helm of the diner for a few months now, Owens learned something that he already was aware of, but the reality of it falling on his shoulders made it more real.

“How expensive everything is. Every time I turn around there’s just more, more, more,” Owens said. “I can definitely see why restaurants are a very stressful business because there really is a low profit margin. You can’t relay those high prices to the customer because you wouldn’t have any.

“So that’s the problem.”