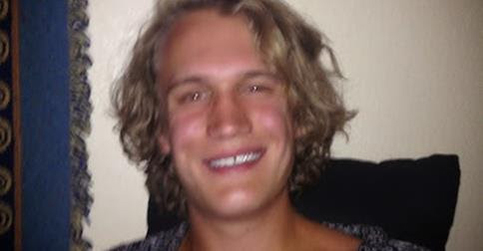 The initial investigation on Saturday’s fatal rollover accident reveals that excessive speed was a factor, according to Nye County Sheriff Tony DeMeo.

The crash occurred just after 11 p.m., on Plantation Road near Thousandaire Boulevard on the valley’s south end.

The accident killed 22 year-old Adam Kadmon-Griffin Ljung and left 21 year-old passenger Jayson Hernandez seriously injured after both were thrown from a 1998 Jaguar convertible.

Authorities believe neither person was wearing seatbelts at the time of the accident.

On his Facebook page, the father of the deceased victim, David Griffin, posted a brief message about his son’s passing.

“I lost my beloved and only son in a tragic car accident on Saturday night,” the post read.

DeMeo said the vehicle was traveling at a high rate of speed just before the accident occurred.

“The vehicle left the paved road to an unpaved road while traveling west on BLM managed lands. It struck some vegetation and mesquite trees, ejecting both occupants. The vehicle rolled over in a furrow, coming to rest on its top side,” he said in a press release.

On the Pahrump Valley Times Facebook page this week, Hernandez’s parents thanked all who supported both families throughout the tragedy as well as the person who contacted authorities moments after the accident.

“I extend my condolence to the family for their loss and I thank you all for all your concerns, comments, actions and prayers for my son. My son will always have remorse for all that has and is happening. He will never fully recover but I will pray to God and thank the man who heard the crash and reacted when he did. If not for him they might have still been out there,” the post stated in part.

On Thursday, Hernandez said that he is undergoing physical therapy treatments and is looking forward to a full recovery.

DeMeo, meanwhile, said a toxicology test will be performed on the deceased victim to determine whether drugs or alcohol may have contributed to the accident.