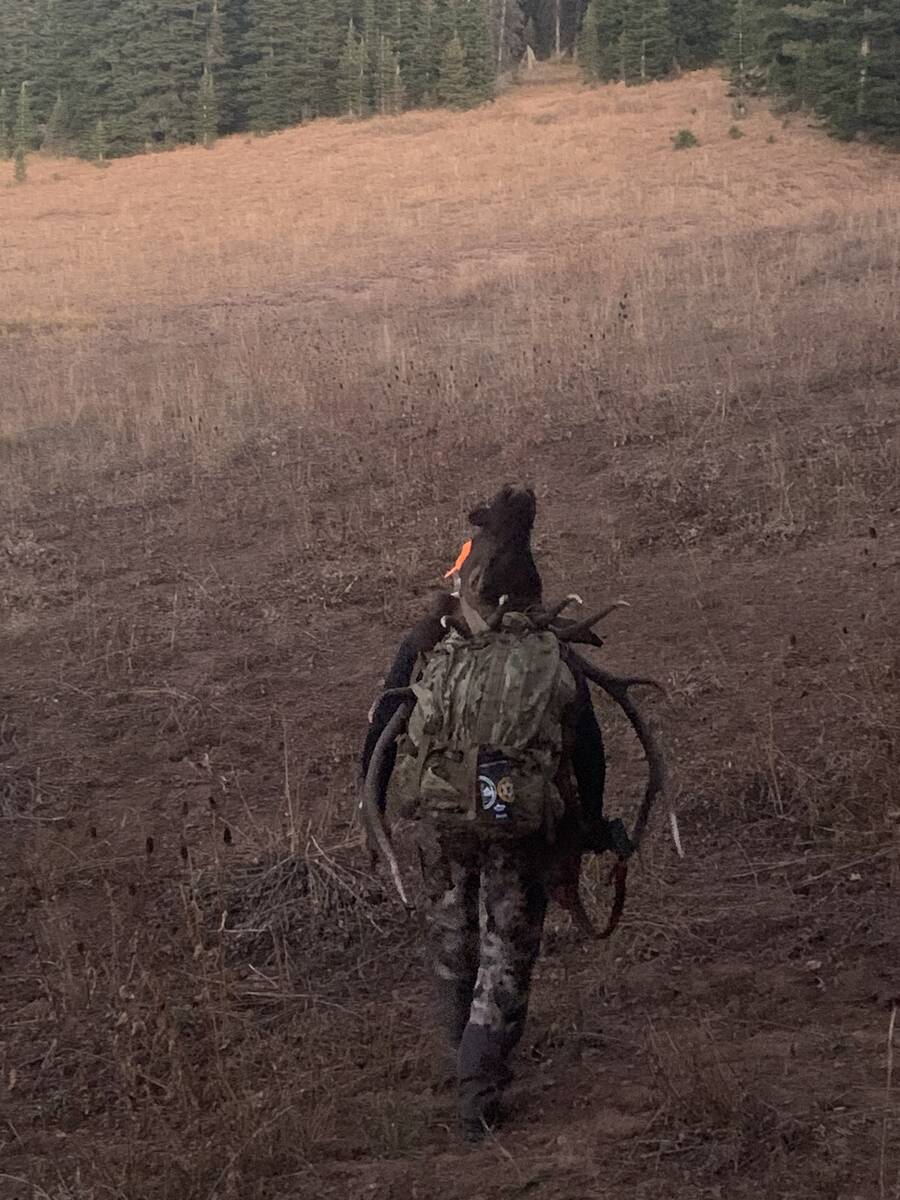 Special to the Pahrump Valley Times Part of the hunting experience is getting up before the sun does, putting on your pack and heading to the high country in search of your reward. 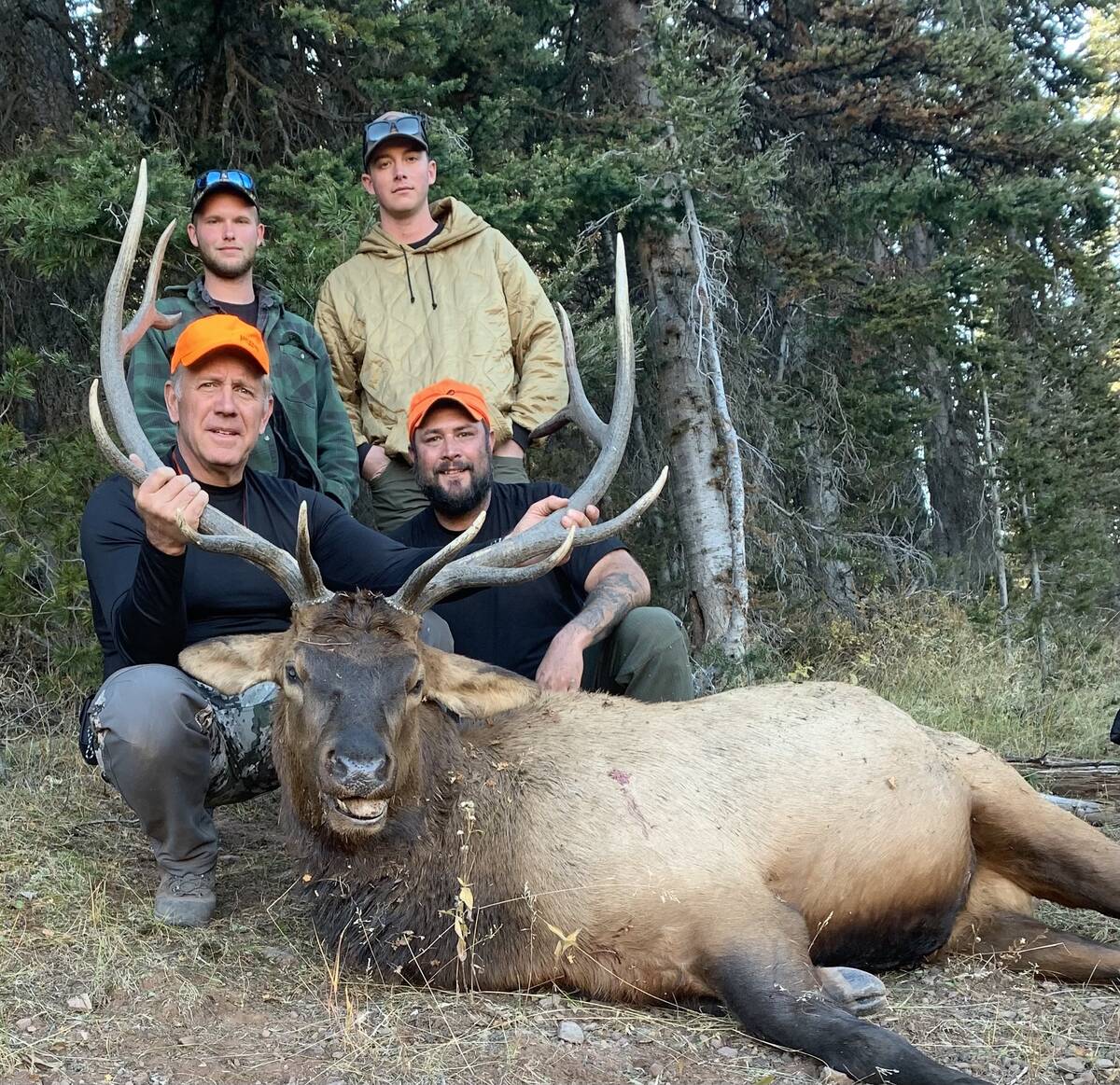 Special to the Pahrump Valley Times Pictures were taken after Craig apologized to the elk and thanked him for the sustenance it would bring to his family and friends.

I was sitting around my Thanksgiving fireplace with another close friend, Craig Kozeniesky , a retired Marine colonel in command of Special Ops in many of the places we’ve seen on the evening news these past few years. In other words, he is one tough Marine. He is also one tough hunter and we, of course, were telling stories of our hunting and fishing experiences. This is his story.

He hunted elk this fall in Wyoming and was joined by his Marine buddy, Scotty. They received DAV (Disabled American Veterans) tags from the state which enabled them to hunt a special early-season bull. They were joined by Scotty’s logger brother and Marine corporal son, on leave to join his dad’s adventure.

This was Craig’s first elk hunt so he enlisted a couple of friends to help him gear up and get ready for the hunt. Former Navy Seal commander Bill Wilson, currently the CEO of the new PrairieFire shooting complex in Pahrump, helped him get a pre-64 Winchester model 70 featherweight rifle in 30-06 caliber, a true classic.

Former Olympic Biathlon Champion Lannie Barnes also pitched in and fit his rifle with a Trigicon 3X9 scope. He sighted it in, 2 inches high at 100 yards, with another retired Marine specialist.

Craig was ready to go in style.

They set up camp and on opening day they were up at “o-dark-thirty” and headed for high country. Those from Wyoming and other rural area call this, “God’s Country.” The air was fresh, cold and clear as they began glassing several high meadows, seeing their first elk. They watched, and as the day warmed the bulls went into the heavy cooler timber.

The hunters felt good about the country and dipped back down to enjoy a lunch break and plan the afternoon’s hunt.

At four in the afternoon they returned to the meadows where they saw the elk earlier, moving stealthily, as Marines know well how to do. The area was quiet as they watched the tree line and waited.

First a cow came out at 350 yards, then a bull. Craig was ready and shook the foot of his napping “spotter” son. “I’m taking the shot,” he said as he aimed at the top of the elk’s back. The bull wavered and Craig took another shot, as he was trained to do, and the bull went down.

They then went slowly forward and scoped the area well, hoping to see a second bull for Scotty’s tag. As they reached Craig’s bull he reached down, touched, apologized and thanked the elk for the sustenance it would bring to his family and friends.

Pictures were taken and the dressing began. The back strap, tenderloin and heart were set aside as the three Marines and the lumberjack hefted quarters and began down the mountain through a ravine, crossing a creek. Craig packed the heart and one of the 125-pound quarters; it was “all in one go.” At 9 p.m. and a cold 20 degrees they arrived at camp with sore feet and backs.

The next day they cleaned the meat, hung it in a tree and ate elk ribs accompanied by a fine, smooth Irish beverage. It was now Scotty’s turn to find an elk, but then, that’s another story.

While my last month’s story didn’t fill the freezer, I’m looking forward to a Christmas feast with Craig and his friends as the hunting experience of sharing meat, stories and adventures continues, celebrating the success of the hunt.

Dan Simmons lives in Pahrump. His outdoors column appears in the Pahrump Valley Times on the first Fridays of each month.