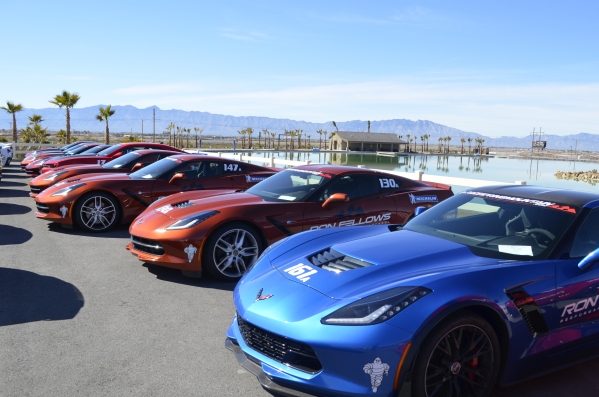 The development of Spring Mountain Motorsports Ranch is forging ahead as demand for its services is rapidly outgrowing available facilities.

Over the last several years, the venue located along Highway 160 in Pahrump has become a beacon for car racers from many parts of the country. Now officials are looking to add more amenities to the site to accommodate the needs of its clientele and community members.

Russ Meads, a consultant for the project, said organizers are looking to construct retail stores, a movie theater and hotel that will be available to the community, unlike the racetrack that is only open to its members.

Meads said that having a hotel will help to attract large crowds to the site for corporate events.

“One of the problems we’ve had is we don’t have enough rooms in town,” he said. “Anytime we have a large event, the rooms are all booked up and they have to go to Vegas, and it’s a little too far for people to drive.”

“We have several parties that are interested in coming in and building a hotel here and it would be open to the public, it would be right on a highway,” he added.

In 2014, Nye County entered into a development agreement with Spring Mountain Motorsports Ranch which allows for an additional one mile of paved track, 50,000 square feet of office and retail space, 100,000 square feet of warehouse and storage facilities, on-site water and sewer treatment facilities and other improvements.

Spring Mountain Motorsports Ranch is the second largest racetrack in the world. It currently has administration buildings, a clubhouse, private offices and garages, car shops, racquetball court, a lake and facilities for teaching students how to drive cars.

The expansion of the site however will depend upon completion of the water and sewer system that will service a 413-acre feet area. Officials had recently finished engineering of the system and received results of soil tests.

“We’re anticipating receiving site development plan applications in the near future for numerous commercial projects such as a hotel, movie theatre, offices and restaurants,” Osborne said in an email.

Spring Mountain Motorsports Ranch officials are currently working with Utilities Inc. of Central Nevada on finalizing an agreement between the two parties. Upon completion, the water and sewer system will be owned and operated by UICN. Officials will also submit their engineering plans to the Nevada Department of Environmental Protection in Carson City.

“We expect a completed review of everything in May,” Meads said.

“We spent a little over a million dollars now in engineering just to make sure that the system would not affect in an adverse way anybody and we’ve done all the drilling and testing, and I’ve been here to watch it myself and it’s fascinating and it’s very, very good,” he added.

After final approvals, officials will finish a subdivision map and start negotiating with hotels, theaters, restaurants and retail chains.

“(They) have been trying to come to Pahrump for a long time,” Meads said about businesses. “There’s just no facilities in Pahrump where they can come in and develop a large development like this. There’s no land that large on a highway and what little bit of land is that large is unserviced by utilities.”

Additionally, there are 20 reservations for home construction along the racetrack. Several lots have already been sold and a 77-home subdivision is pending approval.

While many residents in Pahrump state their concerns about growth and development in town amid an ongoing debate about water conservation, Meads described the project as a “win-win” for the community and said it will create a tax base.

“Ultimately, the responsible growth here is different than I think a lot of people are looking at and saying,” Meads said.

“The beauty of this project is, this is the only one I’ve ever worked with that can truly sustain their own growth,” Meads said. “As we pull water out of the basin to be able to use water here, we are able to put it back into the basin and just reuse it, and nobody else does or ever will have that because of the design of the facility.”

So far, the costs of the development at Spring Mountain Motorsports Ranch have been covered by its owners John Morris and Brad Rambo. The infrastructure for the expansion will cost nearly $12 million, including sewer and water systems and the necessary highway improvements and roads, Meads said.

The project also recently received a nod from Pahrump officials who praised its benefits to the town. Osborne said the facility will have a significant impact on revenue and employment in Pahrump.

“The facility is a major attraction that brings in visitors from outside the area,” Osborne said. “Expansion of the facility not only allows for increased visitors to Spring Mountain raceway, but also additional spending in the community which multiplies throughout the local economy, such as increased spending at hotels, restaurants, gas stations and other businesses, which in turn increases local jobs and revenues.”

On a weekly basis, Spring Mountain Motorsports Ranch does from 160 to 200 classes for those who want to learn to drive sports cars. A motorsports club has close to 400 members.

“This is very rare for a racetrack and there’s nothing else like this in the country,” Meads said. “So John’s ultimate vision for this is to continue that relationship with them and keep it as a corporate retreat. And the beauty of this for the community is we will finally have a true community retail area and entertainment that we have been dying for for a long time.”