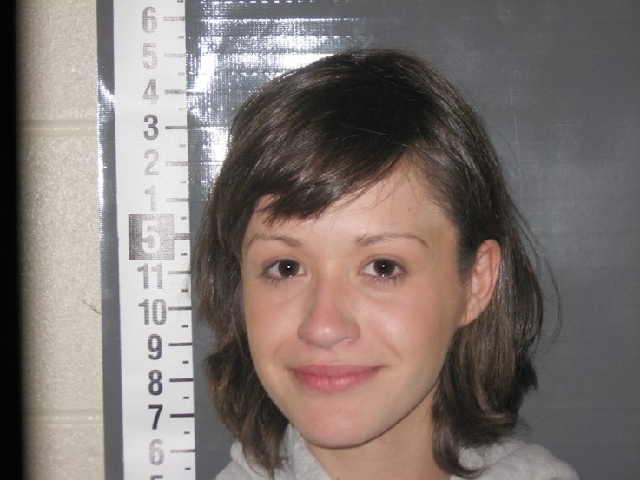 Police arrested a woman Tuesday morning after she allegedly broke into her ex-boyfriend’s home and stabbed him in the back.

Samantha Alicia Marquez, 23, was arrested for attempted murder, battery with a deadly weapon and burglary following a report of a possible stabbing at a residence in the 2700 block of West Charleston Park around 11 p.m. Monday evening.

When Nye County Sheriff’s deputies arrived at the address they discovered a male lying on a handicap ramp bleeding from his forearms and lower back.

The man told police he and Marquez had been involved in a domestic dispute earlier in the evening on Medicine Man Road and he had left to go home.

Later that evening, the victim said Marquez came to his Charleston Park address and forced her way into the home through the back door.

He said although Marquez had previously lived at the address with him, her name had been removed from the lease and she no longer resided there.

The male said another domestic dispute occurred and he slapped her because she allegedly began biting and hitting him. He said he then tried to walk away from the situation and the next thing he knew she had stabbed him in the back with a knife.

The victim then told police he turned around to fight her off as he attempted to get away from her. He said he was eventually able to get out of the house and made his way over to his neighbor’s where he was able to ask for help.

When police entered the victim’s residence, deputies reportedly found blood on the floor along with a folding pocket-style knife with blood on it as well.

Upon further search of the home, it was discovered Marquez left prior to the officers’ arrival.

Police began a search for Marquez and she was subsequently located and arrested at approximately 9:11 a.m. the following morning.

She was transported to the Nye County Detention Center to be booked into custody.

As of Wednesday afternoon, Marquez remained in custody on $15,000 bail.

Marquez’s sister says she wishes she had been able to get help for Marquez sooner. Amanda Marquez called the Pahrump Valley Times this week to find out what had happened to her sister, who reportedly suffers from mental illness coupled with a serious drug addiction. Amanda told the newspaper that she’d attempted multiple times to warn police and her sister’s public defender that Samantha was unstable and a threat to herself and others after a May scrape with the law.

Amanda said over the last several years her family has had to watch Samantha struggle to deal with her issues and self-medicate with drugs with no way to help her.

“She’s needed help for a long time,” Amanda said. “I could never get her somewhere long enough. Because when she’s on a 72-hour (legal mental health hold) she’s in a hospital and they’re giving her medication that they are making her take regularly. And I see a glimmer of Samantha, Sammie, my little sister and she seems OK. But the minute she’s on her own, she’s not responsible enough to take her medications or she uses drugs and has a relapse. And she’s gone.”

Amanda said she has turned to the courts, police and hospitals asking for a way to get her sister the help she needs. Unfortunately, there doesn’t seem to be any preventive outlets for someone in her sister’s condition, she said.

Even when Samantha tried to find help for herself just days before the alleged incident, Amanda said she was told there are no shelters in the county where she could go to try to get away from drugs or her relationship for the night.

“My mom told her to try to find a women’s shelter or someplace like that you can go. And my sister asked an officer (Saturday) do you have a shelter? And she said that the town and Nye County are too small and they don’t have one. And this was on Saturday and then this happened just the other day. She admitted to my mom their relationship had gotten really physical and he was using drugs, too, it’s just crazy to me that it gets to this point,” she said.

“I don’t understand how it got like this because my sister, the way I remember her when we were younger before all the drugs and issues, I never in a million years would have thought this. And it’s sad, because with her record and the state she’s been in for a while with drugs and medical issues, it seems she may be the kind of person that never had the potential to do anything different, to not end up in this type of situation. But that’s not the case at all. She was always very smart, really talented, a great singer, an amazing writer, and I’m shocked. I mean I’m shocked when I look at it in terms of from then until now, but with the way things have been over the last couple of years, I’m not surprised,” she added.

Amanda said she hopes when people look at cases like her sister’s it prompts a response or action from those who work with people suffering from mental afflictions in the legal system to come up with preventive measures where those people can get help before something like this happens.

“I think more people in this situation need to speak up, because it seems like it’s on a supply and demand kind of a scale and I don’t think enough people are speaking up about these kind of issues to get preventative help. Or stepping forward and saying I know someone who’s dealing with this and they’re an adult, how can I get them help? What else can be done? Because I’ve been told she’s an adult and you can’t do anything, unless I become a power of attorney for her, which I guess is really difficult to do, there’s not much I can do,” she said.

Where is the rest of Samantha’s family?

Amanda says her mother is in Tennessee. A brother is in jail for drug possession. And worse, her father was recently sent to prison in California on multiple child sex charges.