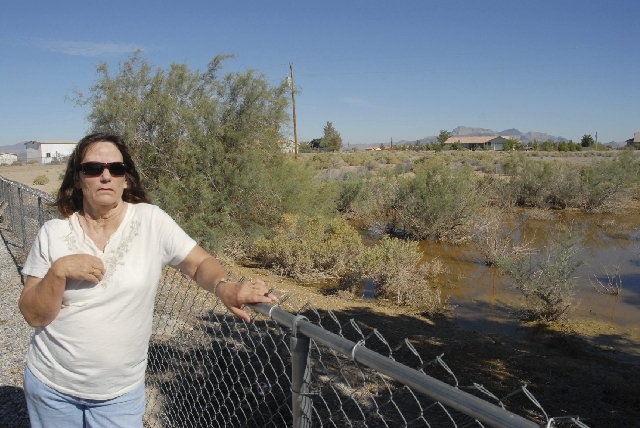 A local woman says a giant puddle of water created by recent rainfall is causing a big stink.

The waters were the result of major flooding that occurred July 28, where almost two inches of rain fell on parts of the valley.

Marsha Raczniak now fears that the water is attracting mosquitoes possibly carrying the West Nile virus and something needs to be done to remove the stagnant liquid near her central Pahrump home.

Raczniak is hoping that local officials can somehow mitigate the “olfactory nightmare.”

Days after the rains passed through, the street where Raczniak lives remained closed due to the high waters.

She said the rainstorm and the ensuing flood was the worst she and her husband have seen in their 21 years of living in the valley.

“The whole street was totally flooded from the back of our lot and the lot next door, all the way across the street and it was just a big mess. The street was so flooded that they had to block it off,” she said.

Raczniak said she made numerous calls to local officials for help on the matter but so far, nothing has been done.

“I contacted Nye County Haz Mat and they told me that they only do cleanup. I called public works, who returned my call and said that they couldn’t do anything. I even called the state environmental agency in Carson City who also could not do anything,” she said.

Raczniak eventually called Nye County Planning where she was directed to go online to voice her complaint through the proper channels.

On Thursday, Nye County Code Compliance Supervisor Darrell Lacy said the county is limited in what they can do to immediately remedy the situation.

“We have to look at whether the bar ditches or culverts are plugged at which point public works will go out and clean it. There are a lot of flat areas out here and we can’t go onto someone’s private property and fix it because I don’t have the authority to do that,” he said.

What the Code Compliance office can do, Lacy said, is to contact the owner of the property to mitigate the problem, but that also is not necessarily the perfect solution.

“From a code enforcement perspective, we can follow our ordinances, which means we send somebody a letter to fix the situation but by the time they get the letter it’s going to be dry again, so there is very, very little that we can do,” he said.

Lacy said that earlier this week a Nye County official inspected the area and found that the standing water did not constitute an emergency situation.

“From what I was told after the inspection, it was not something that could be corrected by cleaning out a bar ditch. The bottom line is it was one of the bigger rains that we have had in recent memory.

“It’s been at least seven or eight years since we had a rainfall of that type. Hopefully it’s not going to be a repeat problem for people because it doesn’t happen very often out here,” he said.

The vacant lot has been on the market for quite some time.

Local real estate agent Cathy Slaughterback has a sign on the property.

Slaughterback said she was contacted by Raczniak about the matter but her hands were tied as far as getting the site cleared of the standing water.

Her reasoning echoed that of Lacy.

“I know Nye County Planning and their procedures because I work with them on behalf of my clients. I was so blindsided and I didn’t know what they wanted me to tell her. The only thing that I own on that property is the sign and that’s it,” she said.

Raczniak, meanwhile, reaffirmed her deep concern for mosquitoes infected with the West Nile virus that may end up laying eggs in the water.

“I am scared to death of mosquitoes because I read on the Nye County web page that there was an outbreak in Nye County that took down a couple of horses and that was caused by mosquitoes and that is dangerous. We can’t even sit out on the porch until the water dries up,” she feared.

Raczniak was referring to an incident back in 2005, when the Nevada State Department of Agriculture confirmed that the equestrian deaths were directly related to West Nile virus.

The agency also confirmed a case where a human contracted the virus.

Nye County Health Officer Maureen Budahl said on Wednesday that at present local residents have nothing to worry about in terms of West Nile in Pahrump.

“We recently had a large rain event and there are standing water pools everywhere. West Nile virus is not a concern in rural Nevada at this time. I discussed it with a communicable disease investigator with the state epidemiology today and asked him specifically what the status of West Nile virus was in the state of Nevada.

“There have been two cases in Clark County and at least one case in Douglas County. To our knowledge there have been no mosquito pools that have tested positive for West Nile virus in rural Nevada recently,” she said.

The health officer also spoke about the outbreak that occurred roughly eight years ago, which was linked to the deaths of more than two dozen horses in the county.

“In 2005, Nye County was hugely at risk when we lost 27 horses. We no longer have those issues because our veterinarians have been very proactive and people are vaccinating their horses. … Make no mistake, it’s definitely on the radar but I just need to reiterate that right now, there is no public health concern in relation to standing water in Pahrump and West Nile virus,” she said.

Lacy, meanwhile, said that the property owner will soon be contacted by the code compliance department about the situation.

“There will be a letter going out to the property owner, but again, by the time it gets to the owner the area will probably be dry again,” he said.