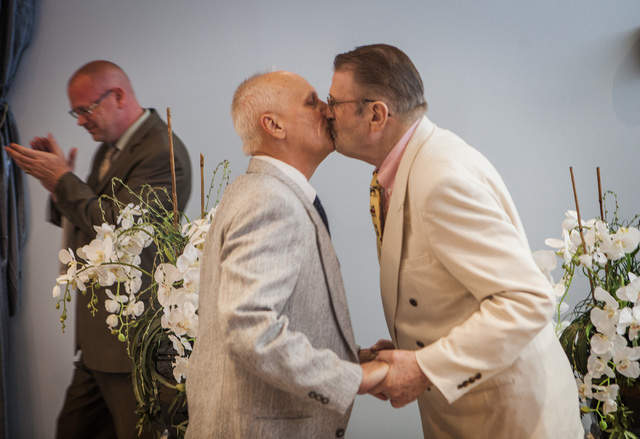 CARSON CITY — There will not be a repeat of the drama that played out in the state Legislature two years ago over gay marriage now that a federal appeals court has ruled same-sex marriage is legal in Nevada.

Gay rights activists are fine with that.

“The reality is that same-sex couples are free to marry in Nevada today,” he said. “It doesn’t make sense to have a second vote on this now.”

SJR13 sought to repeal Nevada’s ban on same-sex marriage that was approved by voters in 2002. It would have required passage by lawmakers again this year before going to voters in 2016.

Leaving the matter to the courts also negates the chance it could be defeated in the Republican-controlled Legislature or at the ballot box. SRJ13 passed the Senate in 2013 by a vote of 12-9. Kieckhefer was the only Republican to vote in favor of it. The GOP now holds an 11-10 majority in the Senate. In the Assembly, it passed 27-14 with one Republican, Assemblywoman Michele Fiore of Las Vegas, voting yes.

The 9th U.S. Circuit Court of Appeals struck down Nevada’s ban last year, and county clerks throughout the state began issuing marriage licenses to same-sex couples in the fall.

The U.S. Supreme Court has let stand federal appellate court decisions around the country — including Nevada — that held gay marriage bans were unconstitutional.

The high court could settle the issue in April when it hears arguments arising out of the 6th U.S. Circuit Court of Appeals that held states are within their powers to prohibit same-sex marriages or not recognize such marriages performed in another state.

Nye County has issued at least eight same-sex marriage licenses, according to County Clerk Sam Merlino. The county began issuing them Oct. 13, the first day allowed after federal courts overturned the bans in Nevada and Idaho.