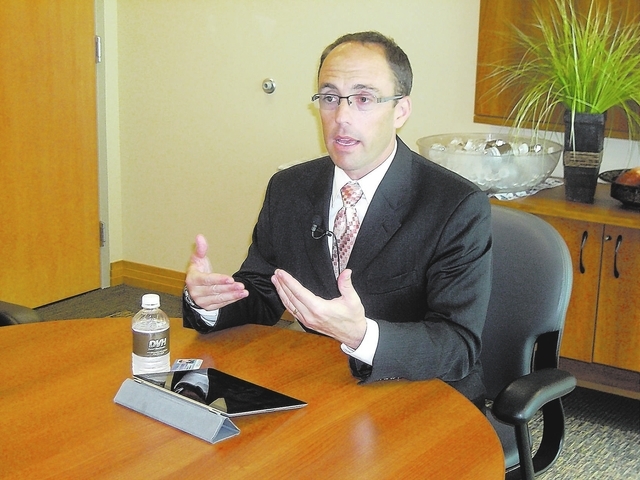 Like it or not, in less than four months Americans will have to be enrolled in health insurance or face a stiff fine imposed on their income tax under the Affordable Care Act, called “Obamacare” by detractors and supporters alike.

Enrollment begins Oct. 1. Some information is trickling out on the cost of premiums for the program that takes effect Jan. 1. Those who don’t purchase the minimum potential coverage will be fined 1 percent of their income or $95 annually, whichever is higher. In 2015 that increases to 2 percent or $375, by 2016, it’s 2 1/2 percent or $695.

The good news is some of the preliminary estimates for the costs of monthly premiums will be low, as many Nye County residents will be eligible for the advance premium tax credit, according to a briefing delivered Monday by Jon Hager, executive director of the Nevada Silver State Health Insurance Exchange. Hager is traveling the state spreading the word. He described a variety of plans available to those without insurance, each divided by the level of coverage into bronze, silver, gold and platinum packages.

“The application for a tax credit is about a 15-minute process, longer for a family,” Hager said. “A typical family of four takes between 35 to 40 minutes.”

Applicants can start by logging onto www.doi.nv.gov. There they can then find their tax credit at www.nevadahealthlink.com.

“We’re hoping that process is transparent, seamless, everything you can say about a website. We want to make it easy for you,” Hager said. “We don’t want you to go with the cheapest plan and then can’t afford the deductible, which is $5,000.”

Four companies are involved in the exchange, he said. Three will be in Nye County: Anthem, Health Plan of Nevada and the Nevada Health Co-op, a brand new organization, where members are the owners.

A family of four making $94,000 would be at the threshold of 400 percent of the poverty level and not eligible for the advance premium tax credit, Hager said. A family of four with an annual income of $47,100, or 200 percent of the federal poverty level, would pay $250 per month under the second lowest silver plan; there aren’t any details yet about a gold plan, which he estimated would cost $50 to $100 per month more, but allow lower premiums and other coverage. For an employee making close to the minimum wage, or $18,000 per year in modified, adjusted, gross income, the premiums for the second lowest silver plan would be $65 per month.

“Based on national standards, it appears many silver plans will have a $2,000 deductible,” Hager said. But a single person making less than $28,000 per year, or a family of four with an annual income of under $59,000, would also qualify for a cost-sharing reduction, which reduces the amount of the deductible on a sliding scale, with the lowest incomes having the lowest deductible.

Instead of waiting to get a tax credit when filling out annual income tax forms next year, the Exchange will deduct the tax credit from a monthly bill. Those who underestimate their income or lie about it and are caught will have to pay the additional cost at the end of the year, Hager said.

More low income people won’t pay any health premiums at all. Medicaid is being expanded under the Affordable Care Act; it will now cover those making less than 138 percent of the federal poverty level — about $16,000 per year for an individual and $32,000 for a family of four. Hager said people can enroll in Medicaid as well online.

Nye County submitted a grant to hire navigators and enrollment assistants but wasn’t successful in obtaining funding, Hager said. Six organizations with 110 navigators will travel the state helping people enroll in the program, he said. There is also a 50-person phone bank that will operate in Henderson. The phone number is 1-855-7NVLINK. Other medical providers, like Desert View Hospital, could apply to be certified application counselors, their training will be paid for.

It will be the standard health insurance policy with the Health Insurance Exchange paying 80 percent of the cost. The maximum out-of-pocket expense will be $6,350 for an individual and $12,700 for a family. Enrollees eligible for a cost share reduction will also pay less out-of-pocket expenses. People can’t be denied coverage for pre-existing conditions. There are no lifetime maximums.

Enrollees will get a commercial insurance card with a Nevada Health Link logo on it, Hager said. The plans will cover 10 essential areas, including hospital coverage, maternity and ambulatory coverage.

Companies with 50 employees or more are required to provide health insurance under the Affordable Care Act, but that enforcement has been delayed until 2015. The penalty is $2,000 per employee, but they will only be penalized after the first 30 workers, he said. Employers are required to notify their employees by Oct. 1 about the law. The Health Insurance Exchange will arrange payroll deductions if necessary.

“The good news for seniors is there are relatively minor changes to Medicare,” Hager said. When it comes to employees who receive insurance from their employer they can keep that coverage.

Hager said 24.9 percent of Nevadans under 65 are uninsured. That’s about 600,000 people. Estimates of how many people will just pay the tax penalty and not enroll vary widely. The Congressional Budget Office estimates nationwide 23 to 24 percent of the uninsured will enroll, the Office of the Actuary estimates 74 to 77 percent, he said.

“Nevada has looked at its economic conditions and according to its economists we’re going to use a number closer to 47 percent (enrollment),” Hager said. But he added, “A bunch of those enroll in Medicaid and then a bunch will enroll in the Health Insurance Exchange. Our enrollment target is about 116,000 people at the end of March, the first open period of enrollment.”

“On Oct. 1, go onto Nevadahealthlink.com, answer the right questions and we’ll put you in the right bucket,” Hager said.

Nevada was part of a lawsuit seeking to overturn Obamacare that was turned down by the U.S. Supreme Court in a 3-2 vote.

“I think the governor’s background as a federal judge, he considers what is going on, he’s bound by the law, he says the law is the law until it isn’t,” Hager said. “It wasn’t a matter of endorsing the exchange but we think Nevada having control of our own destiny is the appropriate course of action.”

The federal government will create exchanges for those states that balk at enacting Obamacare. Hager said having a state program has an advantage in having navigators and enrollment assistance available, as well as being able to release information earlier.

So will the system pay for itself?

“In Nevada, the Division of Insurance did a good job making sure the rates are sustainable,” Hager said.

But he said people can’t judge the success of the program just by the enrollment or the rates in the first year.