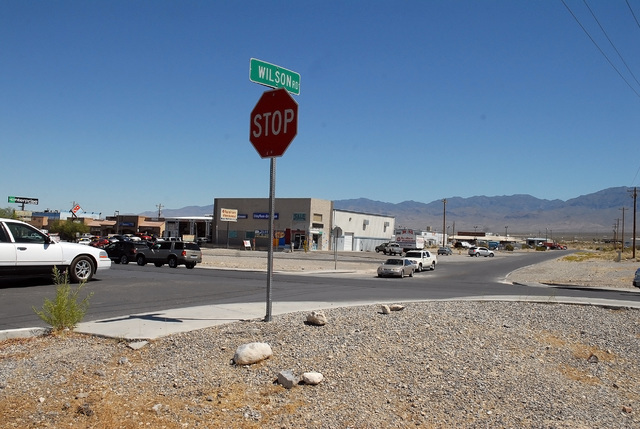 The Nevada Department of Transportation is studying the idea of putting the fourth traffic light or other improvements on Highway 160 at Oxbow Avenue and East Wilson Road. Horace Langford Jr./Pahrump Valley Times

The Nevada Department of Transportation is researching the idea of putting the fourth traffic light on Highway 160 in Pahrump.

As part of the Nye County 2017 Work Program, NDOT proposed a traffic light or other form of improvement at the intersection of Oxbow Avenue, East Wilson Road and Highway 160. The program includes projects across the county scheduled for construction in the 2017 fiscal year.

NDOT spokesman Tony Illia said a traffic light is not a planned project. The entity is looking into the crash data and intersection configuration to determine whether a safety or some other engineering improvement is needed.

The traffic signal idea was the result from a list of compiling concerns, recommendations, ideas submitted from the county during the departments fall transportation workshop. We are currently looking into the need for a remedy and the subsequent best solution, Illia said.

The estimated cost of a traffic signal without the added costs of preliminary engineering and right of way is between $350,000 and $800,000 but may be higher depending on location, according to the NDOT presentation.

The proposal is among 13 ideas from the program that were approved by Nye County commissioners.

Other suggested projects for Highway 160 are a pedestrian crosswalk between Postal Road and Commercial Drive, widening from Calvada Boulevard to Homestead Road and East Winery Road and adding shoulders northbound to Highway 95.

That is a fairly high number for the size of this county, but on a positive note, you did go through 355 days without having any fatalities out of 365 (days), Rosenberg said.

The majority of crashes occurred in the southern portion of the county within the Pahrump area, NDOT data shows.

We are not sure what the safety implications are of that yet, but it is just something to be aware of that we are sharing, she said.

Also in the plan are the Pahrump Bypass, a beautification project for Tonopah medians, improvement to the Nye County Gateway, a paving project on State Route 52 and Gemfield Mine in Tonopah.

Additionally, NDOT plans several chip seal projects in the northern part of the county, including Tonopah, Gabbs and Currant Creek.

The funding for the project will come from the Fixing Americas Surface Transportation (FAST) Act. The measure was passed last year and will provide $305 billion to the state of Nevada for transportation projects over five years.

Fuel revenue indexing, which allows to index federal, state and local gasoline and special fuel to producer price index is another possible funding source. It will be on the ballot in November.

If the fuel revenue indexing ballot measure passes, NDOT will work with the county to prioritize additional projects based upon the added revenue.

Prioritization will be a collaborative process, based upon county priorities and state identified needs, pending final approval from the state transportation board, Illia said.

The state Board of Transportation will approve the Nye County 2017 Work Program and accept its updated Statewide Transportation Improvement Program (STIP) in September or October, Illia said.

STIP is the federally required, four-year transportation program that includes a fiscally constrained list of all federally funded and regionally significant projects.

Generally our first year (fiscal year 2017) is pretty solid after that date, but changes can occur in the later years. We update the board on STIP changes quarterly. Illia said.

Project changes can occur after that date due to funding changes, increased costs and scheduling, Illia said.