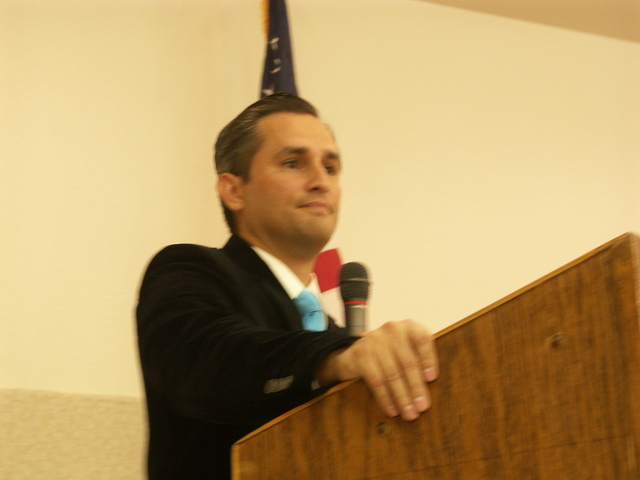 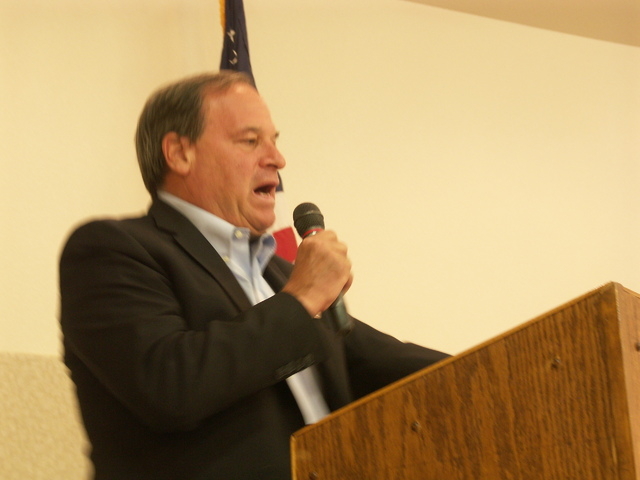 Schwartz said the state treasurer manages the state general fund, which he said is about $2 billion, and the Millennium scholarship set up with tobacco settlement money by former Gov. Kenny Guinn to help students pay for college.

“All of us here have about $2 billion sitting in Carson City, taxpayer money,” Schwartz said. “This money has been invested by the current treasurer at a minus 1 percent, pretty shameful. The current treasurer has also set up what is known as a private equity fund, that’s a fund that invests in unlisted securities. Why the treasurer of Nevada is doing this is beyond me. My opponent, who is not here, claimed this had about a 7.9 percent return.”

Schwartz, a Republican, faces opposition from Democrat Kim Wallin, who is presently state controller. Schwartz ran unsuccessfully for the new 4th Congressional District in the 2012 election. Wallin did not attend the event.

Schwartz said after fees and expenses this private equity fund is losing about $1 million. He wants to take some of this money and use it for a micro-loan finance program for small and medium-level entrepreneurs and use the rest to restructure the Millennium scholarship program, which he said is due to run out in three to five years.

Schwartz said he set a benchmark of earning 2 percent on the state’s $2 billion general fund, about $40 million. He didn’t know how much of the private equity fund he would be able to get back, but if it’s $45 million annually every year that adds up to $200 million.

Schwartz would like to focus scholarships on certain industries like the unmanned aerial vehicle program, information technology or IT and health care. There also needs to be incentives for students to finish college using Millennium scholarships, he said.

The current state treasurer, Kate Marshall, is running for secretary of state.

Schwartz said he grew up in the Chicago suburbs, attended Princeton University, enlisted in the U.S. Army for two years, then received his Masters in Business Administration. That began a 35-year career in the financial industry. He has lived in Nevada six years, the first four years in Genoa, in northern Nevada.

Schwartz’s website states he is chief executive officer of AVCJ Group Ltd., which publishes Asian Venture Capital Journal and the founder, president and CEO of Qiosk.com, as well as a private investor. He authored two books on finance.

Two more state candidates attended the forum, which was dominated by Nye County candidates. One was Independent American Party candidate Tom Jones, who is running for state controller. He said the state controller makes sure bills are paid, writes checks and collects the money.

“The reason I want to run is I believe you need somebody who will expose and publicize any wasteful spending that we have in the government,” said Jones, who unsuccessfully ran for a state Senate seat in 2010 and the 3rd Congressional District in 2012.

He plans to write a newsletter if elected so the public will be aware of what’s happening with the office.

Jones said there’s 48 employees in the state controller’s office, most of them are accountants and bookkeepers, admitting he doesn’t have any of this background.

“I had an accountant who did my books. I gave him my figures and he would put them on a nice piece of paper, a nice document, and give them to me and I would analyze them,” Jones said.

He took shots at the two main parties stating, “a Republican is probably happy collecting the money, Democrats are happy spending it and I’m going to be happy trying to figure where we’re wasting it.”

Pahrump resident David VanDerBeek, an Independent American Party candidate for governor, outlined his extensive platform which includes a moratorium on payments to the Internal Revenue Service, recovering billions in stolen and misplaced taxpayer money, repealing Obamacare, regulating marijuana similar to alcohol, demilitarization of police and the expulsion of the TSA from airports.