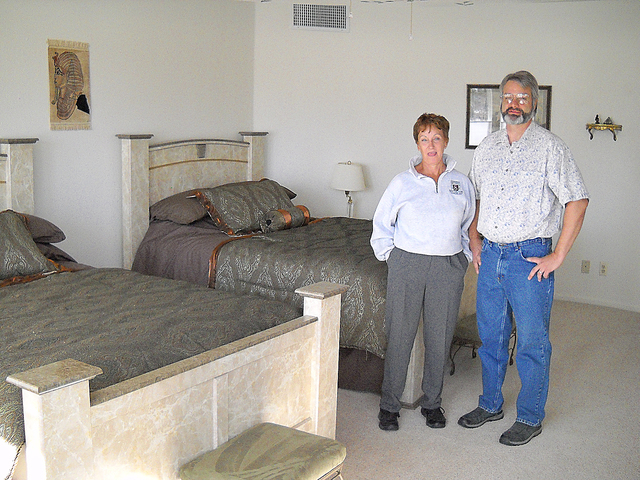 After four and a half years, Darlene Howard, owner of Stay at Dar’s Bed and Breakfast, at 1501 E. Mount Charleston Drive South, is throwing in the towel.

The bed and breakfast, which Howard opened in January 2010 in her spacious 6,500-square-foot home on Lakeview Executive Golf Course, closed its doors Monday.

“Mainly the state fire marshal is making some requirements that are way out of my ball park and I just fought it for two years and I just let him have his way. I’ll just close,” Howard said. “They want me to put fire sprinklers in. They’re putting me in a hotel-motel category, even though I’m not.”

The sprinklers alone would cost $50,000, Howard said. The home has a flat roof which would make the pipes exposed, she said.

“It’s totally unnecessary in my situation. Everybody is very close to the outside door and I have fire alarms,” Howard said. “I can’t afford what they’re requiring.”

The problem began two years ago, Howard said, when a couple applied to open a bed and breakfast in the Winery district and were told they’d need fire sprinklers to get their certificate of occupancy. That led the inspector to question why Stay at Dar’s didn’t have fire sprinklers. Initially she had three fire inspections that were signed off by the Pahrump Building and Safety Department, Howard said.

Howard bought her home at a foreclosure from a father and son who didn’t finish it in the 1990s. She opened Stay at Dar’s to recoup some of the money she spent on bringing the house up to par.

Stay at Dar’s did good business during is existence, thanks to good write-ups on important websites like Trip Advisor, she said. “Last I knew I was told I was the only one anybody heard of that didn’t have any negatives,” Howard said. “I’ve gotten’many international visitors as a result of Trip Advisor.”

A sampling of a few of the reviews of Stay at Dar’s on Trip Advisor state: “this is a fabulous bed and breakfast. The house is comfortably furnished with plenty of room for guests to feel comfortable. She makes a delicious breakfast accommodating guests dietary needs. Dar is an incredible host.”

Another review reads: “this is a fabulous B&B with luxury accommodation and an excellent host, the house is beautifully presented with lots of room for guests to use at their leisure. The breakfast was individually prepared and delicious.”

Still another review said, “a wonderful experience, it’s like visiting a rich relative and they give you the roaster suite to stay in during your visit. Food was great and Dar is a beautiful host. House is clean and neat as a pin.”

Howard opened up three bedrooms with the intent of attracting upscale visitors at Spring Mountain Motor Sports Ranch or the Front Sight Firearms Academy. Rates were $85 per night, $95 per night or for the two bedroom, $125 per night.

In April 2012, Stay at Dar’s was the scene for the shooting of the film “Do Not Disturb” about the escapades of a TV reality star of a ghost hunting show.

A couple of other proprietors have taken to the idea of opening bed and breakfast establishments in Pahrump.

Gary and Maria Nova received a conditional use permit from the RPC for Casanova’s Bed and Breakfast at 2181 E. Winery Road in June 2012.

Two years ago, Raja Gangadharan opened K-7 Bed and Breakfast at the corner of Hafen Ranch Road and Thousandaire Boulevard next to his existing pizzeria and bar. Gangadharan said he received a cease and desist order from the building department until he paid $21,000 to install fire sprinklers in his eight rooms. Gangadharan said business has been good, but it’s been a little slow in the typically slow season just before the holidays, he charges $69 per night midweek and $79 on weekends.

A report from the planning department said most bed and breakfast guests tend to be middle-aged, well-educated, moderately well-off couples searching for a quaint atmosphere.