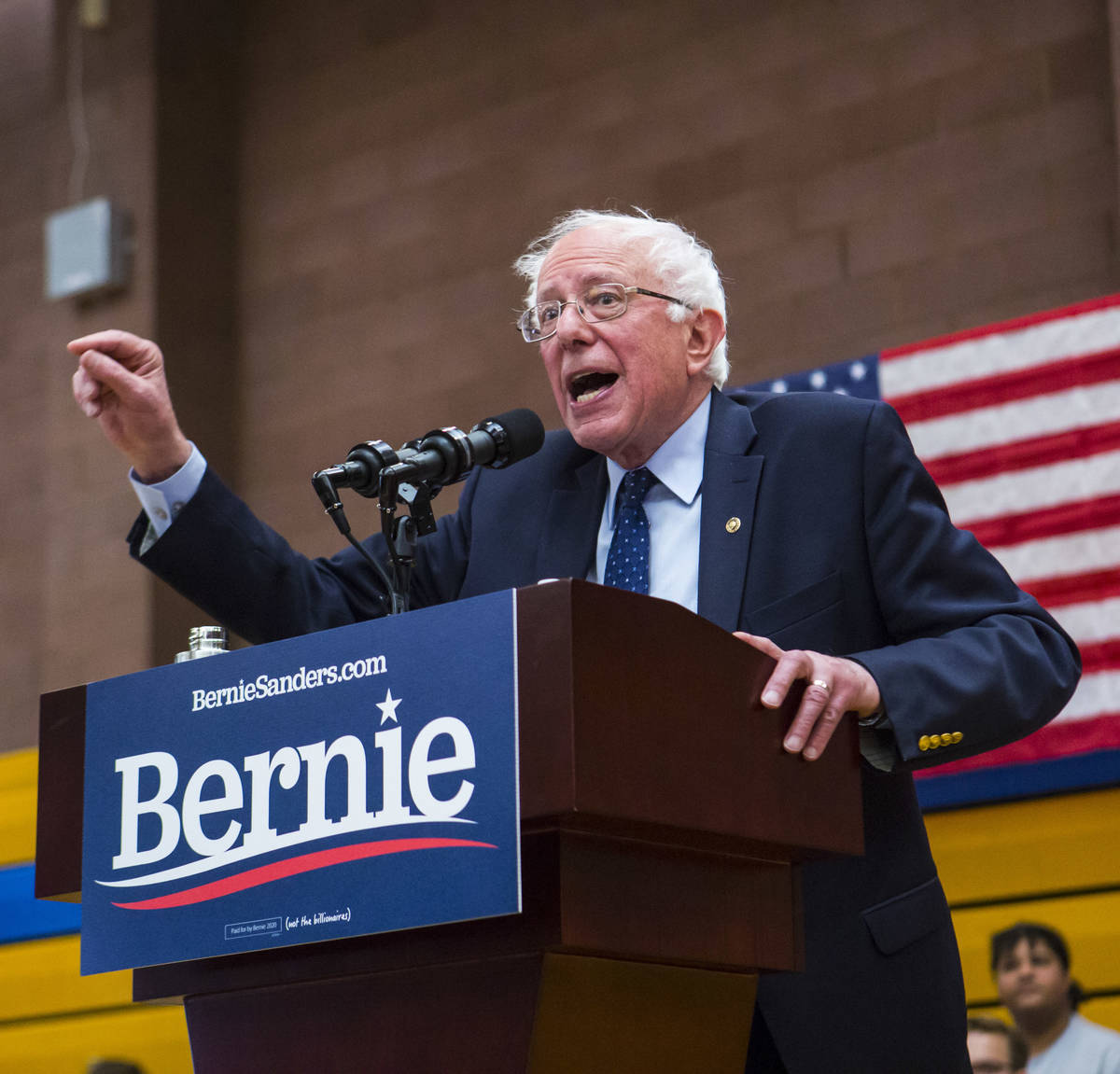 Chase Stevens/Las Vegas Review-Journal "It didn’t take President Donald Trump long to weigh in on the departure of Sen. Bernie Sanders from the Democratic race for president," writes Las Vegas Review-Journal columnist Steve Sebelius. 'DNC rigged it! Bernie drops out!' was the headline on a Trump campaign fundraising email on Wednesday, April 8.

It didn’t take President Donald Trump long to weigh in on the departure of Sen. Bernie Sanders from the Democratic race for president.

“DNC rigged it! Bernie drops out!” was the headline on a Trump campaign fundraising email on Wednesday. “It’s official: Crazy Bernie is dropping out of the race. Democrats never wanted anything to do with Crazy Bernie — it was RIGGED against him from the start.”

That’s certainly the president making the best of a bad situation (for him), inflaming the passions of Sanders supporters who already suspect establishment Democrats were secretly cheering for progressives such as Sanders and Sen. Elizabeth Warren to lose, thus making a general election campaign against Trump easier.

But it’s not just Trump who’s singing from that hymnal. People on the left are, too.

Progressive cartoonist and commentator Ted Rall unsparingly criticized establishment Democrats in general — and Biden in particular — as abusive spouses, metaphorically beating the progressive left for their votes and offering no love in return.

“Like the victim of an abusive alcoholic parent or spouse, (progressive voters) will … wallow in magical thinking and project good intentions upon a candidate who has given them no reason to think he has changed,” Rall wrote in a Wednesday column. “Maybe dad isn’t drunk tonight. Maybe Biden is secretly liberal.”

Rall says Biden could easily dispel progressive fears by signaling he will make liberal appointments to his Cabinet and to the most important position of all, his vice president. But he discouraged them from holding their breath: “With Joe Biden, there’s even more reason than usual to believe that nothing good can come out of standing by him,” Rall writes.

So Trump and the progressive left are upset at the same thing: the fact that Joe Biden isn’t a progressive liberal and won’t become one.

But why should anyone be surprised at that? Biden never claimed to be a liberal. He made none of the traditional feints toward the left in his primary campaign (standing firm against “Medicare for All,” for example).

Yes, it took him time to get going, as Sanders and Pete Buttigieg won in early states that have never been kind to Biden. Later, however, Biden — moderate, centrist, establishment as they come — came roaring back.

Was it rigged, as Trump claims? Well, only if you define rigged as “getting the most votes.” Sure, the Democratic National Committee may have preferred a Biden victory to a Sanders victory, but so did the majority of primary voters. After the fiasco of 2016, party leaders were more hands-off than usual thanks to campaign rules that Sanders himself helped write.

And those rules produced Biden as the nominee.

The question now: Where do the Democrats go from here? Rall notes in his piece that “intransigent #BernieOrBusters will cast about for a third-party vote, write-in Bernie or sit out the election in November.”

But there are undoubtedly fewer progressives such as Rall, who see only marginal difference between another four years of Trump and four years of Biden, than there are those who believe, as Biden has said, that “four more years of Donald Trump will fundamentally alter the character of this nation.”

The coronavirus epidemic has done more than make Trump-style stadium rallies impossible. Stay-at-home and business closure orders have sent unemployment applications skyrocketing overnight. The next president will not only have to deal with the continuing effects of the epidemic, but the economic consequences. And, whoever is in the White House come next January will have to start planning on how to deal with the next inevitable global pandemic, too.

And whether he’s on the campaign trail or not, Sanders won’t be going away anytime soon. That’s a good thing. Whether you agreed with his agenda or not, you have to at least appreciate his ability to identify the issues. Why is it, after all, that America is the only major county in the world that doesn’t guarantee health care to its citizens as a right? Or what are the long-term effects of a growing wealth gap between the very rich and the very poor? Don’t corporate special interests have outsize influence in Washington?

Millions of people responded to Sanders’ campaign when he raised those questions. And while he didn’t win the nomination, the eventual winner might do well to consider why his message resonated so well.