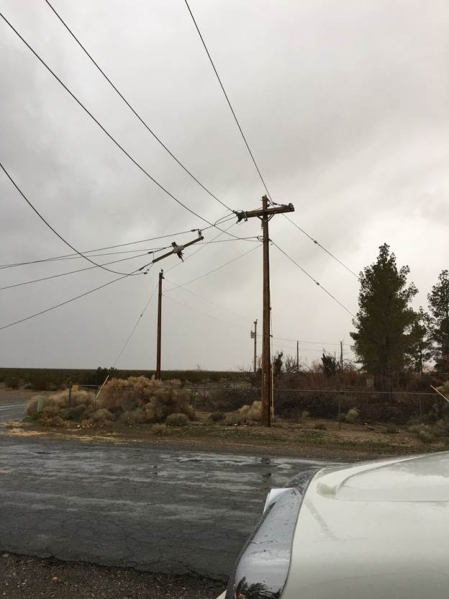 The storm system that brought rain and a mix of snow to the valley over the weekend created some weather-related issues that affected a portion of town.

VEA began receiving reports of outages at 4:30 p.m. Sunday with the largest outage leaving about 1,055 members without power. The outage affected an area from Kellogg Road to Hafen Ranch and by 5:40 p.m., all but 24 of those members had power restored. The remaining customers without power had their power back on by 4 a.m.

During this time the National Weather Service had issued a severe thunderstorm warning for Pahrump, which ran from 4 p.m. until 4:45 p.m.

The outage began after lightning struck a pole, destroying it, which created a domino effect that damaged a total of six poles.

The Nye County Sheriff’s Office had to shut down Kellogg Road to all travel from Hafen Ranch Road to Sandy Road due to the downed power lines.

The sheriff’s office said two power poles were down in the area with charged lines across the roadway. Motorists were advised to seek alternate routes while crews worked on remedying the problem.

VEA sustained a total of 13 other weather-related incidents in the Pahrump Valley and Amargosa Valley, affecting 77 members, whose power was restored by 8:00 p.m.

VEA immediately dispatched crews and they were able to isolate the problems and restore power quickly to most members. VEA’s crews worked through the night to repair the damage caused by the storm. By approximately 4 a.m., all power had been restored to affected customers.

Despite the challenges caused by the storm, VEA crews and technicians were able to minimize the duration of the outages for the cooperative’s members. VEA thanks its members for their patience and support.