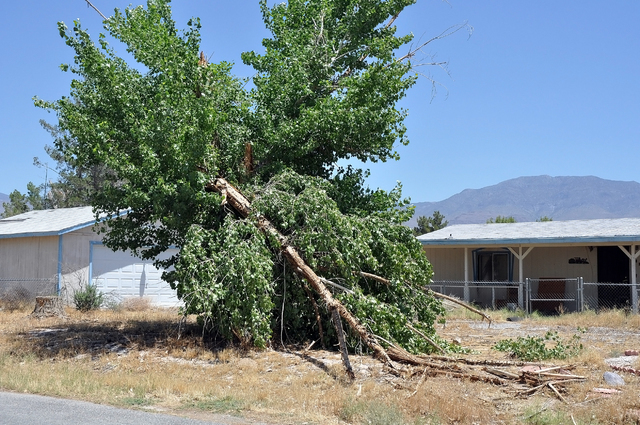 A storm that dropped record-setting rain on the valley knocked out power in portions of town and gave emergency crews plenty to deal with late last week.

The storm that developed Friday dropped just more than an half-inch of rain on the valley, with the majority of it falling between 9 p.m. and 11 p.m. The amount of precipitation for the day was a record amount, according to National Weather Service meteorologist Phillip Steele.

Storms knocked out power to 1,782 Valley Electric Association, Inc. member-owners in 18 separate outages, after the heavy rains, lightning strikes and wind gusts that topped out at 46 mph downed four primary lines, involving three trees and one transformer having to be replaced.

About half of the cooperative members affected, which ranged from west of Robs Peak to Highway 160 and Dandelion Street and from the southern end of Homestead Road to Leslie Street east of Highway 160 at the northern end of the valley, had their power back on within an hour.

Six line crews from VEA worked through the night Friday to restore power back to the remaining member-owners by 7:30 a.m., Saturday morning.

Pahrump Valley Fire and Rescue Chief Scott Lewis explained that the department saw an influx of calls in a short period of time.

We had upward of 11 to 12 calls within an hours time including the medical calls, Lewis said. They consisted of downed trees and downed power lines. There was structural damage where awnings were actually pulled from the residences and structures, into the power lines.

The calls were from all areas of town but the hardest hit was north and central.

Lewis stated that most of the calls were for various issues, with a majority of them dealing with issues caused by the storms electric nature.

There were lightning strikes and a lot of reports of brush fires started by the lightning, however most of them self-extinguished due to the torrential rains that came through, he said.

In addition, neighboring Crystal was also hit hard by the storm, causing a crash that left one man injured.

There was lots of road debris in the area of the Crystal turnoff, which made it impassable, Lewis explained. We had a motorcycle accident out there where the rider received serious injuries.

Despite the increased workload in a short period of time, Lewis said that no one in the department was injured and that a Fire and Rescue vehicle is in need of repairs after running over some road debris in Crystal.

Were tired but were okay and just trying to get things done, Lewis said. Were making small repairs on the apparatus from the water and the rocks in the roadway.