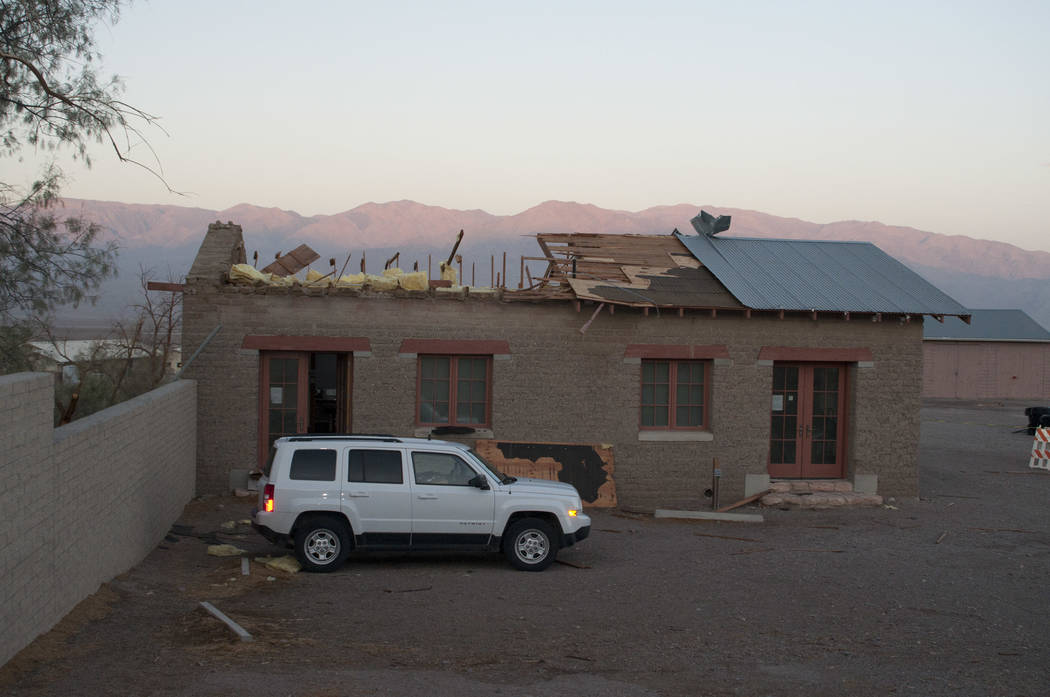 Special to the Pahrump Valley Times Extremely high winds in the Cow Creek administrative area of the Death Valley National Park blew the roof off of a historic office building dating back to the Civilian Conservation Corps era of the 1930s. Windows were blown out of four vehicles belonging to staff living at Cow Creek. Roofs of five other buildings at Stovepipe Wells were also damaged.

Extremely high winds Monday in the Cow Creek administrative area blew the roof off of a historic office building dating back to the Civilian Conservation Corps era of the 1930s, according to a news release. Windows were blown out of four vehicles belonging to staff members who live at Cow Creek. Roofs of five other buildings at Stovepipe Wells were also damaged by the wind.

Although the wind was extremely strong, it didn’t last long, officials said. After it died down, rangers discovered the missing roof and covered up computers and office equipment to protect them from the rain.

Death Valley National Park Superintendent Mike Reynolds estimated wind speeds up to 100 mph but said the high winds lasted for only about 10 minutes.

“Lightning strikes were coming fast and furious, when a sudden microburst of wind swept through Cow Creek,” Reynolds said in a press release. “We ducked behind the porch pillars to protect ourselves from the wind, and then saw dumpsters blowing down the road.”

The damage to the historic building in the Cow Creek administrative area is estimated at $300,000, as the wind also damaged the ceiling and ventilation inside the building. Five pickup trucks and two pieces of heavy machinery incurred $5,000 in damages as their windshields were damaged by debris. A roof of the campground restroom at Mesquite Spring was also damaged, and officials estimated the damage at $10,000.

“The roof blowing off the building and damage to employee vehicles are the major damage. There was quite a bit of debris blown around the maintenance yard; that has been cleaned up. There was minor damage to roofs at the Stovepipe Wells hotel,” Slater said in an email.

“The atmosphere during this storm was very dry below the storm cell,” said National Weather Service Meteorologist Alex Boothe. “Microbursts occur when rain falls into very dry air causing evaporational cooling. The cooled air sinks rapidly and spreads in all directions as it hits the ground.”

As the winds blew and heavy rains fell, rangers were called to the Inn at Death Valley to respond to a tree fire—a palm tree had been struck by lightning and was smoldering in the crown. Rangers were able to quickly extinguish the fire burning in the garden area west of the Inn.

North Highway/Scotty’s Castle Road, Titus Canyon Road, and Mesquite Campground are currently closed. All other roads and facilities are open.