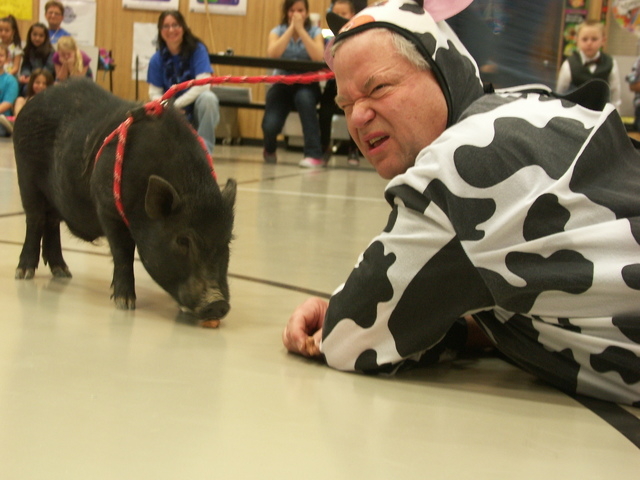 Students at J.G. Johnson Elementary were doubled over in laughter after watching their principal kiss a live pig last Friday. It was all a part of Nevada Reading Week where Principal Jeff Skelton issued a challenge to his students.

The challenge was simple.

Read more than 12 million words in eight weeks, and Skelton would dress up as cow for the day and kiss a pig during an assembly.

“We do something like that every year,” he said. “The fifth graders get to choose the challenge for what happens if I lose. Last year I dressed as the girl and the year before I put my hair into a blue Mohawk and that’s how it came about.”

Skelton said he was both shocked and pleased that the students were able to exceed the challenge by such a large margin.

“Doubling their previous record was quite an accomplishment,” he said. “I really didn’t expect that many, but every time I was going up the halls they were all reading so it’s pretty cool. The word count is calculated by a computer which determines how many words are in each book,”

“Every month we would have a principal lunch where everyone who gets perfect attendance for the whole month gets to have lunch with me,” he said. They also get to watch a movie for a little bit and they get 10 extra minutes of recess time, which they like. They also celebrate their personal achievements with Kona ice.”

The principal noted that kissing the pig was not as bad as previous challenges he’s performed.

“The other worst challenge in my mind was dressing as a woman all day long because I had to go to the store at one point, and that was not a good deal, because it was very embarrassing,” he said. “When you think that it’s for the kids, so much the better.”

Students exhibiting a perfect attendance record were also recognized during the assembly, as were the top readers, fifth grader Wyatt Pillman, who read 344,561 words.