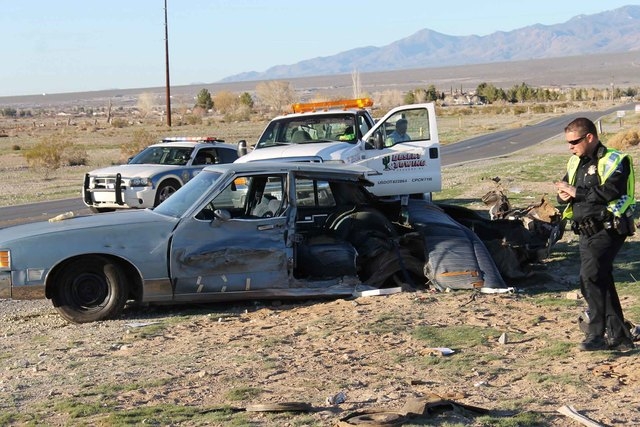 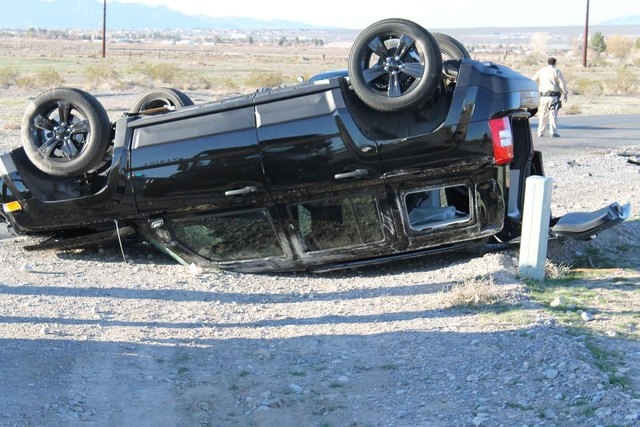 A collision on Hafen Ranch Road and Katie Lane sent four people to the hospital during the weekend.

According to police, a Jeep Patriot traveled into oncoming traffic Feb. 8 and hit an older model Oldsmobile head-on, causing the Jeep to roll over and land on the roof and the Oldsmobile to spin off the roadway, shearing off the trunk and back of the vehicle.

According to a press release, the Nye County Sheriff’s Office received a report of a vehicle accident with injuries at approximately 2:18 p.m. in the area of Hafen Ranch and Katie.

Pahrump Valley Fire and Rescue Services were on scene when deputies arrived. Deputies reportedly found one vehicle on its roof. According to Deputy Jason Heaney, an investigation revealed that the Jeep crossed over into the other lane, sideswiping another vehicle.

Nevada Highway Patrol assisted with traffic control at the scene for several hours.

Pahrump Valley Fire and Rescue Chief Scott Lewis said none of the injuries appeared to be life-threatening.

Lewis said he did not believe speed to be a factor.

“Ultimately, that would be up to the Nye County Sheriff’s Office to make that determination,” Lewis said.

Heaney said the sheriff’s office would be forwarding the findings and the investigation to the Nye County District Attorney’s Office for further review.

When asked if he thought alcohol might have been a factor in the accident, Heaney said, “All I can say is there were some admissions and he (the driver of the Jeep) might have some sort of medical issue. But, that will be left up to the district attorney’s office on whether or not they choose to pursue charges. This will remain under investigation. Anything else will be released by the sheriff.”

The sheriff’s office did not release the name of the driver of the Jeep.