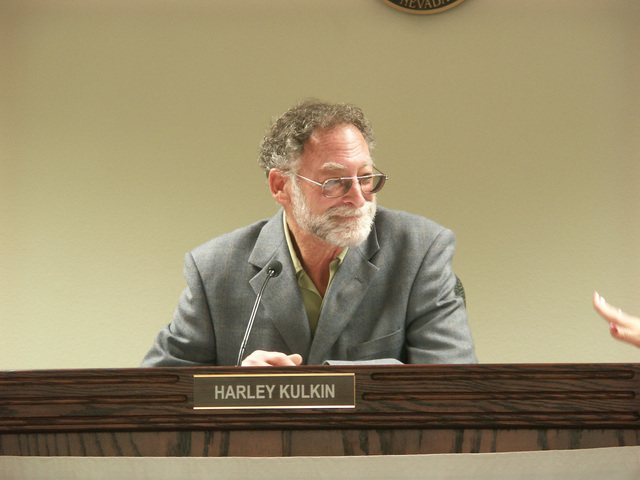 Pahrump Town Board members appeared to have no interest in Chairman Harley Kulkin’s agenda items during Tuesday’s final town board meeting.

Kulkin wanted support for an item, that if passed, would establish a red-light district near two brothels on the south end town.

The other item requested the board support raising the room tax in Pahrump.

Addressing the first item, Pahrump Town Manager Susan Holecheck said in order to establish the red-light district, board members would have to abolish the current town ordinance pertaining to prostitution and escort services occurring within the boundaries of the Town of Pahrump.

The brothels, technically are not zoned within the town of Pahrump, but Nye County.

“Apparently there is, by some, a desire to create a red-light district way out where the brothels are,” she said. “The land that wants to join in that, according to the Regional Planning Commission is within Pahrump and not within Nye County, even though they are contiguous.”

Holecheck also said, though she understands some locals would like to have a red-light district in the community, she believes by acting on the agenda item, the board would essentially be putting the cart before the horse regarding the matter.

“I think it would be better to create the red light district and then have the town decide what it wants to do with the land within its boundaries.” she advised.

The town manager also said the action of removing the ordinance would not result in sexually oriented businesses popping up anywhere in the community.

“There are some safeguards when the original ordinance was done,” she said. “Pahrump didn’t have planning and zoning at the time and this prevented what we call sexually-oriented businesses, from occurring willy-nilly. We now have planning and zoning so even if we were to take away this ordinance, it doesn’t mean there’s going to be brothels allowed all over the place.”

Town Attorney Bret Meich provided something akin to a disclaimer prior to the board’s discussion.

“This item requires the adoption of the ordinance amending the town’s code,” he said. “To do that, you need to follow the procedures set forth in (state law) to do that,” Meich said. “If you vote tonight on this item, it will not effectuate into change to these ordinances in the code. However, you may discuss it among yourselves and consider alternatives.”

Following Meich’s caveat, Kulkin told the room why he initiated the agenda items.

Kulkin’s agenda item had its share of critics beyond his fellow board members.

Connot appealed to the town not to take any action to revoke the ordinance.

“Any attempt by the board to revoke or repeal PTO Chapter 18 at the Dec. 9, meeting would be void,” Connot said. “Not only must proper notice of the agenda be given, but if the board seeks to amend the PTO, it must ensure that the notice is properly and timely published pursuant to NRS Chapter 269.”

Connot said aside from procedural deficiencies, he has concerns regarding any attempt to revoke provisions of the PTO in the absence of analysis, input and debate.

“With all due respect to the board, it appears that the item has been placed on the agenda in an attempt to serve the interests of a single individual,” he said. “The provisions of Chapter 18 Article II have been part of the PTO for nearly a quarter century. For the board to seek to revoke or repeal that provision of the PTO on the eve of the board’s dissolution would be an egregious misuse of authority and a serious deprivation of constituents’ constitutional rights.”

Board members spent more than an hour and a half discussing the agenda item before they unceremoniously decided to allow Nye County Commissioners to pick it up early next year when the body assumes the duties of the Town Board.

Kulkin’s next agenda item was met with the same reaction from colleagues.

The item sought to raise the room tax rate to 13 percent, a 5-percentage point increase.

At present, the town’s room tax rate is 8 percent, while the state room tax is one percent, for a total of nine.

Kulkin said the money generated could be used to purchase the town’s fairgrounds project.

“This would be to collect money and buy out maybe 200 acres of that land from restriction where the town owns it out and can do whatever they want to it,” he said. “We can turn it into an enterprise that makes money, brings in tourism, provides jobs, we can partner with private people. We would virtually be free of any restrictions on the land.”

Waters suggested that any action on the agenda would be a bit premature.

“I’ve gotten a lot of calls already from people saying why we are doing this?” he said. “We haven’t had any public meetings to make any decisions and we haven’t heard from any of the people. That is something I definitely want to do before I even consider this. We need to have a public meeting.”

Holecheck also agreed with Waters about the timing of the item.

“Staff would recommend first meeting with all potentially affected business entities,” she commented. “Staff does not believe now is the time for such an increase. We are just now beginning to see an uptake in tourism and this increase might hamper both tourism as well as economic development.”

The town manager also spoke about several hurdles that must be cleared before the idea of purchasing the fairgrounds site would even be considered.

“It would be very difficult to buy some of that fairgrounds portion from BLM,” she said. “There are reversionary issues, there’s aspects to the patent, which will take a long time and it will be an arduous process. We just received information as to what it’s going to take to bring power to that site and you’re at probably $1.2 million dollars,” she said. “I don’t think that you ever raise room tax revenues without consulting with your community partners.”

Sanders, who is a member of the tourism advisory board, made sure to mention that he was speaking as a private citizen.

“By raising the room tax, we increase the cost of overnight stays to all RV visitors too,” Sanders said. “Further, this might impede those investors who are looking at the possibility of building hotels and RV parks. I see no “back-up” to justify this increase at this time.”

Room tax funds are collected from both hotel and RV space rentals.

The town allocates their share of the room tax based on prior town board action to five special room tax revenue funds including the airport, fairgrounds, parks, economic development, arena and tourism.

Each year during the budget cycle, the Town Board appropriates the room taxes collected or accumulated to various tasks.

Kulkin decided to withdraw the item from consideration after an hour.