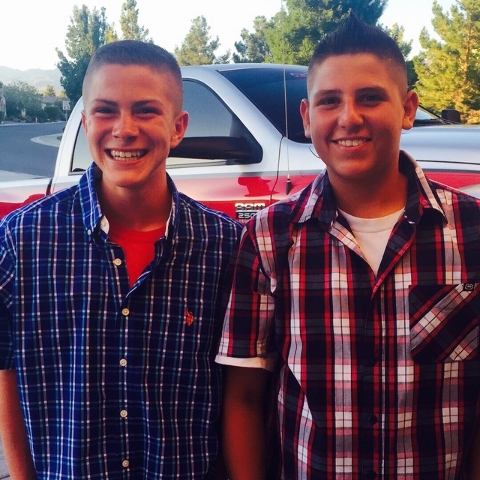 Andrew Avena, left, and Jacob Lopez have scheduled an ‘All Lives Matter’ rally on Saturday July 30 in the parking lot of the Nye County Sheriff’s Office, beginning at 9 a.m. The 30-minute ceremony is designed to show unity within the community as attendees will join hands and stand shoulder to shoulder supporting all police agencies. Special to Pahrump Valley Times

In the wake of the recent police shootings across the country, two Pahrump boys are making an effort to unite the community with a poignant gesture.

Jacob Lopez and Andrew Avena, both brothers and straight A students at Rosemary Clarke Middle School, are hosting an All Lives Matter rally on Saturday, July 30, at the Nye County Sheriffs Office at 1520 E. Basin Ave., beginning at 9 a.m.

The rally, designed to support members of the law enforcement community, will involve attendees to stand shoulder to shoulder with hands clasped as an expression of unity.

The goal, Jacob said, is to have at least 1,000 community members take part in the effort.

My brother and I are trying to get the residents of Pahrump to join in and stand shoulder to shoulder from 9 a.m. to 9:30. Our goal is at least 1,000 people to gather at the sheriffs office on Saturday, July 30th.

My brother and I saw the Dallas shooting and we wondered why people are doing this, he said. I, my mom, and my stepdad and my brother talked about it, so me and Andrew wanted to make a change.

Additionally, Jacob said he hopes the action will begin to reverberate in others areas where residents can come together and support those in law enforcement.

We would like to see people in other communities do the same thing and hopefully make the country a better place, he said. But for right now, we are trying to make our community a better place. When I heard about the shootings, I felt upset and was curious about why people were doing this. Its everybodys behavior that makes it that way.

Though the rally is in support of police agencies across the country, Andrew said he does have sympathy for those who have been victims at the hands of some police officers.

My stepmom has raised me to be this way, he said. Shes raised us not to bully and be racists or anything of that sort.

The boys mother, Stephanie Lopez, said the recent violent events as of late, served as a way for her family to discuss whats going on in society that perpetuates such acts.

We as a family have watched several videos during the last few weeks, she said. It doesnt matter what race the people are that are being shot by the officers. Ive explained to my children on a regular basis, there are bad African-Americans and bad white people and bad cops.

Lopez also said when the Dallas shooting happened, her son became quite emotional and just wanted to talk.

He came to me and his stepfather and asked why people are doing this, she said. We gave him our honest opinion and he just kind of took off with it, he and his brother.

Lopez also noted that her family wants to keep the rally safe and respectful.

As the mother of the boys, I do not want anybody negative to show up at this All Lives Matter rally, she said. If you dont support officers and if you dont support black lives and our lives, you should just stay home. I dont want to show my children any more negativity than they have already been exposed to. They are really trying to do a positive thing and I just want to make sure they are safe because thats a big concern for me obviously.

Lopez also expressed pride in her sons effort to try to rally the community.

To be completely honest, Jacob and Andrew have been working on a Stamp Out and No Bullying program for the middle school when they go back to school next month, she said. We teach them to always shake a veterans hands when they see one and thank them for their service. They always open doors for women and respect authority.