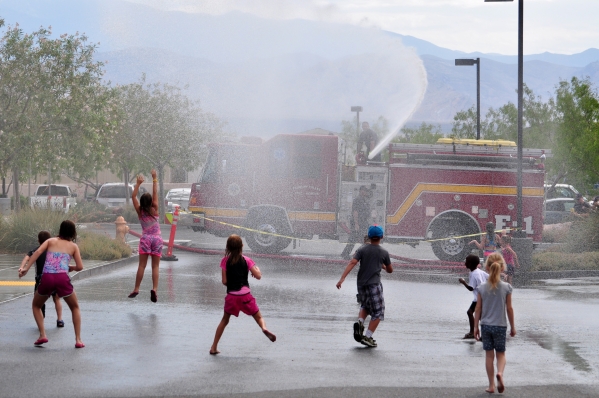 After experiencing a cooler than normal July, temperatures are forecast to be on their way up.

According to the National Weather Service, the average high temperature in Pahrump during July was 100.7 degrees through Tuesday, a slight departure from the normal high average temperature of 104.3 for the month.

Temperatures are forecast to be around the 102 to 106 range the next several days, seeing a return to, and above, the average high temperature in town of 104 degrees.

The cooler temperatures this month can be attributed to a weather system that is usually in place not being as strong as in a normal year.

“We had a lot of storms around the area which gave us quite a bit of cloud cover a number of the days, which kept highs on some days down pretty low,” National Weather Service meteorologist Caleb Steele said. “Also, the high (pressure) that is usually in control of the Southwest wasn’t really as strong and as far west and south, so we actually didn’t get up into the 110s at all.”

There is a chance that the monsoonal moisture makes a return to town this weekend, which if precipitation occurs, will keep the high temperatures down a few degrees.

“We have some moisture headed up here for the weekend,” Steele said. “Nothing record breaking or anything associated with a tropical system or anything, just a regular monsoon push. There will likely be some showers and cloud cover in the area at some point this weekend.”

Steele said that the best chances for rain in the area will be in the higher elevations, but the chance of valley rain is possible.

For the year Pahrump is at 2.38 inches of rain, which is right around the normal amount for this time.

Looking ahead to August, Steele said forecasts point to around normal temperatures, with a slightly higher than average chance of precipitation throughout the month as the monsoonal flow continues.

The weather service recommends drinking plenty of water and for those planning on being outdoors to use sunscreen. Also, limiting the use of alcoholic and caffeinated beverages; wearing lightweight, light-colored, loose-fitting clothing; and wearing a shirt and hat at all times.

Homeless, the elderly, children and those who already have health issues are the most at-risk during peak hours of the day.

Do not leave children or pets in cars, as even leaving them in a hot car for a few minutes could prove to be hazardous or even fatal.