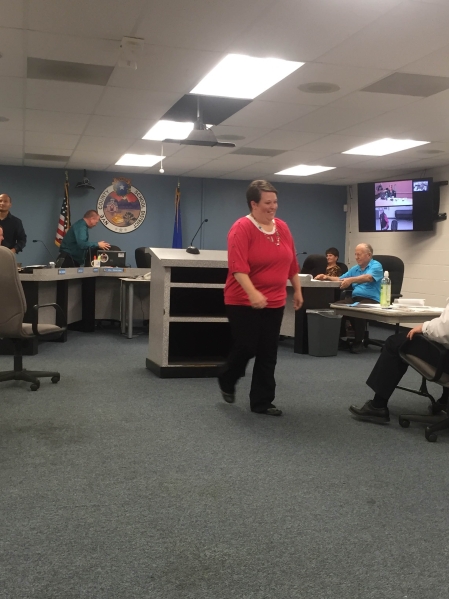 The Nye County School District filled its vacant seat on their board of trustees last month, appointing Teresa Stoddard to the Area ll seat.

The board unanimously approved naming Stoddard to the position, which was left vacant after Rob Mobley departed. She was interviewed in front of board members at the Oct. 27 board of trustees’ meeting.

Stoddard grew up in Southern California, attending public school throughout her childhood, then went to college at Brigham Young University in Provo, Utah. She graduated BYU with a degree in health education.

After her schooling was finished she was a teacher with Clark County for around five years.

When questioned if she would have the time to dedicate to the position, Stoddard said she’d do whatever she could to juggle family life and the work the board of trustees requires.

“I don’t have a job outside of the home, but that is a huge job in itself,” Stoddard said. “I don’t have a lot of specific time commitments besides dropping off my kids at school and picking up my kids from school. A lot of my time during the day will be devoted to taking care of things and making sure I plan ahead to make sure I have enough time to devote to this position.”

Stoddard said she is aware that traveling to outside areas like Las Vegas, Reno and other parts of Nye County is a part of her duties and she explained that she could work that out as well.

“The only problem that I could foresee is making sure my kids are taken care of,” she said. “My husband works for Las Vegas Metro and his hours are really interesting, but we’re usually able to work it out, as we have lots of friends that are able to take care of the kids.”

With parents sometimes becoming disenfranchised with issues between the schools and their children, Stoddard hopes to bridge the gap.

“When you get a note that something’s happening that evening or don’t even know there is an event going on, that’s what makes it difficult from a parent standpoint,” she said. “So I think working on communication, letting people know that they can come and talk to the school when there are things going on is key.”

When questioned why she applied for the vacant seat, Stoddard said it boiled down to her family.

“Because I love my children,” she said. “I want them to have the best educational experience possible. I just enjoy being with the kids, sitting with them and watching them learn. I want to know how I can increase my kids’ ability to learn in their educational experiences and pass that off to other kids to make sure they have the best opportunity to reach their full potential.

“I want them to do well not just in school, but later on in life too.”