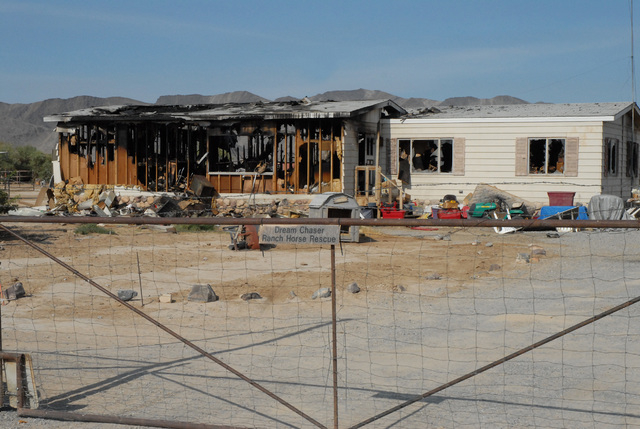 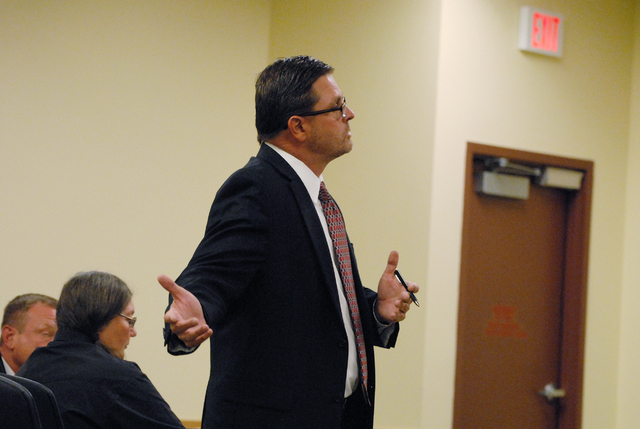 A local woman’s failed suicide attempt in July 2013 that led to the deaths of 17 animals in her care started over a text message, testimony in the case revealed Wednesday.

Diane Davis was in Pahrump Justice Court for a preliminary hearing in the matter. After prosecutors unveiled some of the evidence against Davis, including testimony from six witnesses, Justice of the Peace Ron Kent ordered the case be forwarded to District Court.

Davis is facing one Category B felony arson charge and 13 Category D felony charges of abusing or torturing animals.

The first witness to testify was Rea Krenzer, who often helped Davis with her horses.

Krenzer said Davis often talked of killing herself and her animals. She told the court that those threats started about five years ago.

“Diane Davis has made that same statement several times to me. That it was in her right as opposed to giving away her animals for free or to a home, that she has the right to kill every one of them and set her house on fire. She’s made this statement to me personally several times,” Krenzer said.

Davis’ home had been sold at a foreclosure auction the month before the July 12, 2013 incident.

During cross-examination by Davis’ attorney, Paul J. Andras, Krenzer admitted she never took the threats so seriously that she felt she needed to call police. In fact, she waited six months, until this past January, to tell authorities about them.

“This is what she did. And she would have a fundraiser and she would make money and then, it was just her procedure for how she would get money out of people,” Krenzer told the court.

Ronda Freeman, the second witness to testify, said she was a close friend of Davis’ and felt partially responsible for the incident. Freeman and Davis, along with Freeman’s niece and nephew, were with Davis on the day of the incident, helping her with her horses. Freeman said she took a phone call from her daughter and that Davis overheard part of her conversation and became upset.

Freeman’s daughter had reportedly told Freeman that she no longer wanted her children around Davis since Davis was making suicidal threats, including making one via a text message to Freeman earlier that day.

“My daughter had called and Diane had overheard the conversation that my daughter and I had. And she got upset. She went into the house with a can of gasoline and said she was just going to burn it all down,” Freeman said.

“She said she wanted to die. She was distraught. My daughter had mentioned something about a text and that she didn’t want my grandchildren over there anymore if Diane was going to continue having those thoughts. I was trying to calm her down, to Diane. My daughter has a tendency to blurt out things, say things before thinking about what is going to happen when she says things.”

By that time, Freeman said she was frantically trying to get Davis out of the home. Her daughter, Amberrose Barton, who would testify next, drove to the ranch to help her mom calm Davis down. The women could not get into the home. Using a chair to reach a nearby window, they removed the screen and opened the window in order to talk to Davis.

Mother and daughter both testified to seeing Davis walking around the home with a gun, sometimes pointed at her own head, sometimes carried over her shoulder. At one point, Davis was witnessed feeding an assortment of dogs she cared for, placing an unknown white powder substance — Davis told the witnesses she’d been stockpiling the substance for years — onto the dogs’ food, and then locking the animals in cages for the night. One dog went limp in her arms and she carried it around the home.

“It was like she had just lost herself during that period of time. By that time the police had shown up. She was holding one of the dogs, Stetson, and he went limp in her arms,” Freeman said.

When deputies arrived, they asked the women to leave the property. Shortly thereafter a fire started inside Davis’ home.

Deputies were going to breach the home and remove Davis when the fire started. Davis instead came out on her own as smoke filled the North Murphy Street house.

She had a revolver in her hand and was Tazered by the supervising deputy on scene, Sgt. Michael Horn.

Davis was treated at the scene for smoke inhalation and was eventually taken to a hospital for a mental evaluation per Nevada’s Legal 2000 rules. Before that, she gave a statement to a detective on scene.

Det. Eric Murphy testified that he read Davis her rights and then took an initial statement. Davis’ attorney Andras objected to allowing the statement into the record, arguing that she was not competent enough to make any statements. After some argument, the judge allowed the questioning to move forward.

Murphy said Davis told him the incident started over a disagreement.

“She told me she had a disagreement with some friends and went into the house and at some point during that time she felt the best way to handle things was to start the fire. She told me, this was during a second interview with the fire chief, that she had a pile of clothes on top of the dryer and set the clothes on fire. I asked her if she used an accelerant, she said she did not,” Murphy told the court.

The detective said he sent Davis for a mental evaluation after she repeated threats to commit suicide during questioning.

Andras and fellow defense attorney Steven Altig gave few clues as to how they plan to defend Davis should the case go to trial. The attorneys posed several lines of questioning that seemed to have little to do with the incident.

Among these were questioning the witnesses about removing property from Davis’ home without the woman’s permission. The defense attorneys also seemed to elicit conflicting testimony from the witnesses about whether shots were fired during the incident.

Murphy said one spent shell casing was recovered from the revolver Davis possessed during the incident. Deputies Greg Curtin and Jose Parra, both of whom responded to the scene, testified to hearing multiple shots. Freeman said she heard as many as “four pops.” Davis’ attorneys asked several questions about whether any tear gas canisters were fired into the home, possibly eluding to a defense that calls into question whether the fire was started accidentally by the police.

Murphy admitted that no autopsies were done on the animals to determine their cause of death. He also said the home was too unsafe for him to enter in order to collect physical evidence, including to look for any suspicious white substances that could have been used to poison the dogs.

Davis is scheduled to be arraigned in District Court on Aug. 18. She is out of custody on bond, but has not stayed out of trouble since the July suicide attempt. In October 2013, Davis was arrested for allegedly attempting to obtain a false identification from the Department of Motor Vehicles in Pahrump. That case remains pending in District Court.