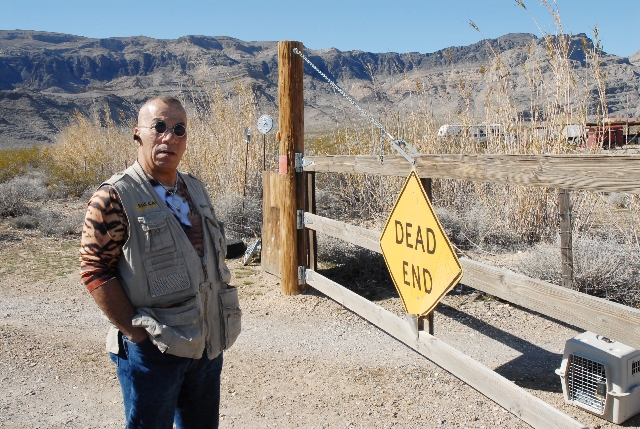 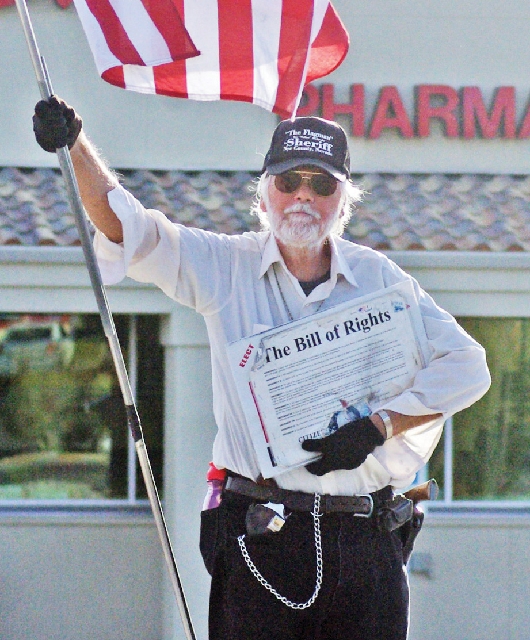 Ray “The Flagman” Mielzynski was issued a cease and desist letter by Nye County code compliance ordering his tenant, Karl Mitchell, to move his tigers off his property. Mielzynski claims the notice isn’t legally valid.

“It’s not signed by anybody but code compliance and it’s not valid. They have to have a judge sign a cease and desist, they can’t just have anybody sign it,” Mielzynski said.

Mitchell has housed his seven tigers and a liger — a cross between a tiger and a lion — at the Flagman’s 20-acre parcel at 6061 N. Woodchips for three years.

Mitchell’s permit case has dragged on for a year.

In June 2012, the Pahrump Regional Planning Commission deadlocked 3-3 on whether to grant Mitchell a conditional use permit. When they revoted to break the tie in August 2012, the RPC voted 4-1 against the CUP.

In October 2012, the Board of County Commissioners overturned the RPC decision and approved the permit.

But in February, the RPC revoked Mitchell’s permit, on the grounds he was improperly exhibiting the animals in violation of his U.S. Department of Agriculture permit. This time, the Board of County Commissioners in April, narrowly upheld the RPC revocation upon Mitchell’s appeal, by a 3-2 vote, exhausting his administrative appeals.

Mielzynski said he’s been renting the space to Mitchell as a courtesy, a place to house his tigers, for which he doesn’t receive any rent.

“I’m going to run for sheriff again next year. I don’t need any citations from code compliance and now I’m under the gun. It seems like no good deed goes unpunished,” Mielzynski said.

He said a lot of celebrities have visited Mitchell’s sanctuary, a positive thing for the Pahrump Valley.

Darrell Lacy, head of the Nye County code compliance office, said Mielzynski was served with a 14-day notice on May 29, which comes due this week.

But The Flagman gave a conflicting account of what happened.

Nye County District Attorney Brian Kunzi disagreed with Mielzynski’s legal analysis about the ability of code compliance to sign off on the cease and desist order.

“Whatever would be issued by code compliance would be absolutely appropriate because it tells the owner he is in violation of code compliance. If the problem is not corrected in a number of days, legal action could be brought which could include criminal charges. It actually is a misdemeanor to ignore code compliance,” Kunzi said.

Mitchell said he plans to file suit against Nye County in federal court for harassment, civil rights violations and equal protection, since other exotic animal owners in Pahrump don’t require conditional use permits.

“He believes it’s arbitrary and capricious because there’s all these people, some with or without conditional use permits and they operate with no hoops,” Mielzynski said. “If it’s a federal lawsuit, he’ll get an injunction to get them to stop harassing him and me.”

Other owners were grandfathered into existing regulations, that is, they owned the animals before the code was changed.

“That certainly is within his rights to try to do that. We can’t stop that. It’s a real simple matter. He was given conditions of his conditional use permit. He violated those conditions set by the Regional Planning Commission. Karl appealed it to the Board of County Commission,” Kunzi said of the lawsuit threat. “His conditional use permit has been revoked. This really is not complicated. So he has no right to have animals housed on that property. So it really is quite simple. There’s nothing complicated about it.”

Mitchell said his compound qualifies as an animal sanctuary which is exempt through county and state laws.

But according to the DA, that hearing in front of a judge will indeed come if Mielzynski and Mitchell don’t honor the code compliance order.

Mitchell’s tigers were removed once before, in 2005, while he was in prison, and taken to an animal sanctuary in Texas.

Mitchell said everything is status quo, his animals are all fine, safe and healthy. He added the Endangered Species Act prohibits government from any detrimental actions that would harm or remove an endangered species.