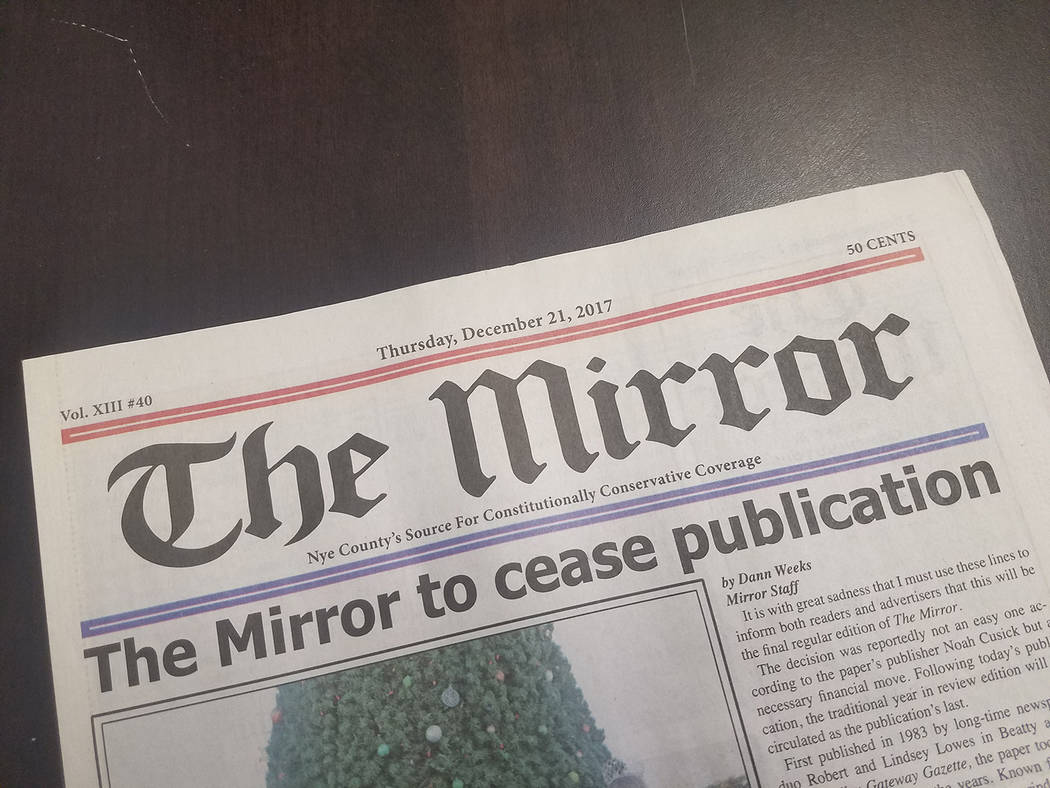 David Jacobs/Pahrump Valley Times A look at the front page of the Dec. 21 edition of The Mirror. The Mirror began its story in 1983.

The Mirror, a publication with more than three decades of history in Pahrump, is coming to an end.

“This community has offered me a unique opportunity of playing a small part in making this a wonderful place to live, and for that I will be ever grateful,” wrote Dann Weeks, editor of The Mirror, in the publication’s Dec. 21 edition in a story about the closure, which would also be the paper’s final regular edition.

The move was not an easy decision by Publisher Noah Cusick, though necessary in financial terms, Weeks also reported in The Mirror.

The Mirror began its story in 1983 with then-owners Robert and Lindsey Lowes of Beatty, who led the press as The Death Valley Gateway Gazette at that time.

“Known from the start as a publication with an axe to grind with authority viewed as corrupt, The Gazette gained a reputation as a take-no-prisoners publication that held no cow sacred and no friend, political or otherwise, protected,” Weeks wrote in his farewell story to readers, which Weeks said he did with “great sadness.”

In 1992, the publication entered a new era of ownership and came under the helm of Joe Richards, then-owner of two bordellos in Crystal. Richards sold those holdings to Dennis Hof in 2010, the Las Vegas Review-Journal reported.

Richards rebranded the publication as the Pahrump Valley Gazette to focus on the Pahrump area, which was recognized for general excellence in 1997 by the Nevada Press Association’s annual awards.

At that time, sentiments of corruption in Nye County were high, Weeks reported. With that, The Gazette moved to the forefront of coverage of local news and “political drama.”

Weeks recognized many people who have meant so much to him over the years, though he didn’t have room to mention them all: MaryAnn McNeal, who he said helped guide the paper toward community involvement, a commitment that remained up through the final days of the publication’s existence, he wrote in his farewell to the Pahrump community.

Weeks also wrote about Hal and Luci Lowe, who spent much time with the publication.

The Mirror’s financial instability began in 2007, leading to several acquisitions of the publication. Weeks said the fate of the publication is like so many other small newspapers in the U.S. that shut down after being bought up.

Stephens Media was later sold to GateHouse Media, shifting to News + Media Capital Group LLC at the end of 2015, the Review-Journal reported in its Dec. 17, 2015 edition.

The Mirror’s spirit lives on

The Mirror will not completely disappear.

According to Cusick, some aspects of the coverage in The Mirror could be used in the Pahrump Valley Times.

On top of that, the Pahrump Valley Times will absorb a vital part of The Mirror’s coverage.

Former Mirror reporter Robin Hebrock, who has devoted the last four years to the publication, will be joining the Pahrump Valley Times to carry on the spirit of The Mirror, covering politics and local news.

The Mirror’s current subscribers have two options going forward: opt out for a pro-rated refund or use monies already paid to The Mirror toward a subscription to the Pahrump Valley Times.