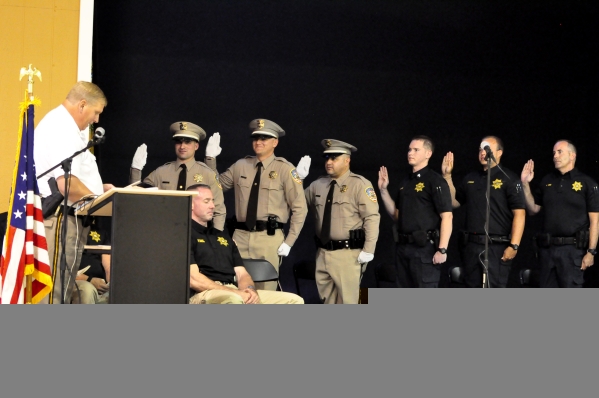 The Nye County Sheriff’s Office just added three new deputies to their roster from the six who graduated from the academy on Saturday.

Sheriff Sharon Wehrly said the graduation ceremony was held by the Silver State Law Enforcement Academy out of Las Vegas.

The academy training was 720 hours and covers everything from conducting murder and sexual assault investigations, to fingerprinting and de-escalating a tense situation.

Wehrly said once they reach the academy the deputies will also know firsthand what it feels like to be on the business end of a Taser.

“I don’t think they ever really get used to that and I certainly didn’t get used to it,” she said. “I think the Taser is worse than the mace.”

At least three of the six graduates, James Burke, Eric Anderson and Mark Vobis were recognized for their performance at the academy.

Vobis earned the Top Shooter award while the Top Physical award was presented to Eric Anderson.

As part of the ceremony, the reading of the Law Enforcement Oath of Honor was delivered by Richard Deutch.

She noted that once the graduates go through their field training, the new deputies will be on their own patrolling the streets of Pahrump.

“Actually, one of them is already working at the courthouse,” she said. “They are finishing up their field training and as soon as they’re done, they will be out on the street by themselves with one person per unit. We also have a brand new field training program and this will be our first group to go through that.”

The sheriff also said two of Saturday’s graduates paid for their own training, as they are not yet affiliated with a law enforcement agency in the state.

“If they are not affiliated it means that they were not hired by a sheriff’s department or a law enforcement agency before they went through the academy,” she said. “They are that dedicated that they actually paid for it themselves. They work another job and they pay to go to the academy and that really says something about their dedication.”

Additional staffing maneuvers at the sheriff’s office include promotion of a third sergeant to provide additional supervision in Tonopah and surrounding rural areas.

The changes are intended to ensure as close to 24-hour coverage in most areas of Nye County to ensure services are available to residents when they need them.

Wehrly said she will continue to evaluate the needs of the Northern Area Command and provide resources as the ability presents itself.

“The three new southern command deputies are from the Pahrump area so they know the town quite well.”