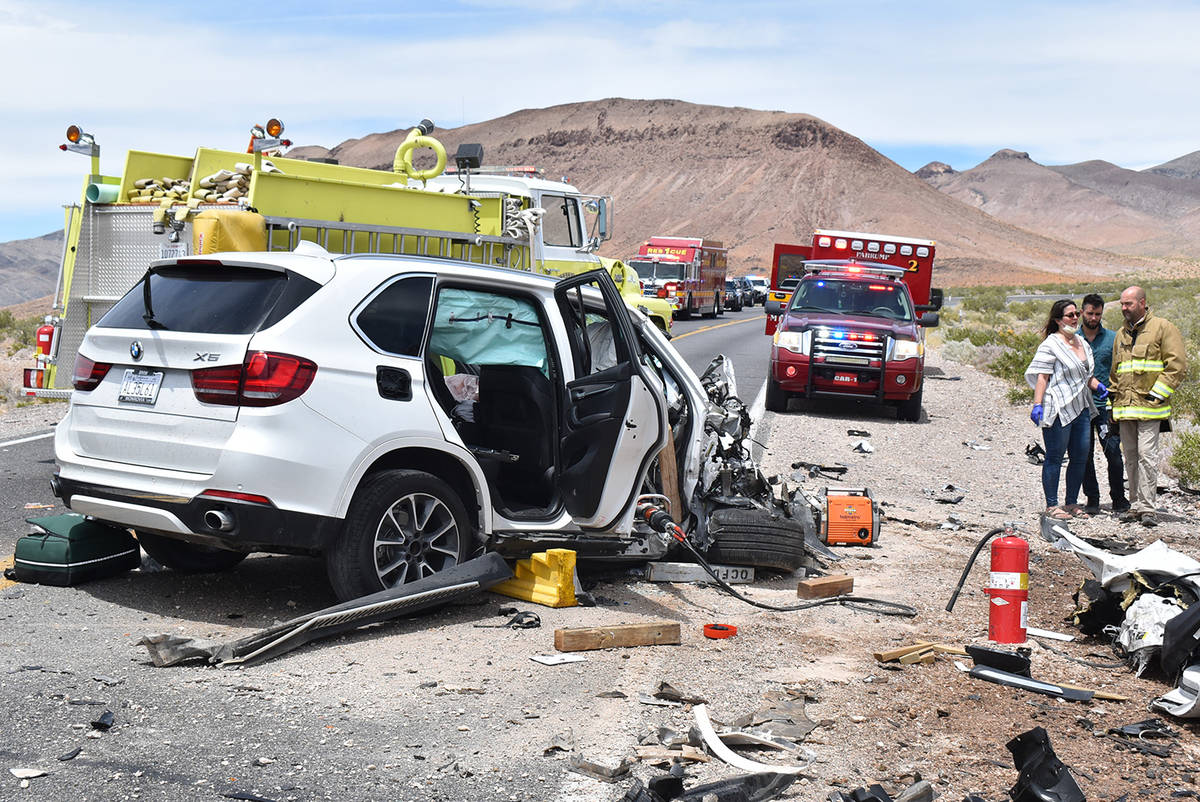 Special to the Pahrump Valley Times Three people were killed following a two-vehicle head-on collision along State Route 178 in Inyo County on Sunday, May 31, at approximately 12:21 p.m. The crash prompted a mutual-aid response from both Pahrump Valley Fire and Rescue Services and Southern Inyo Fire Protection crews. 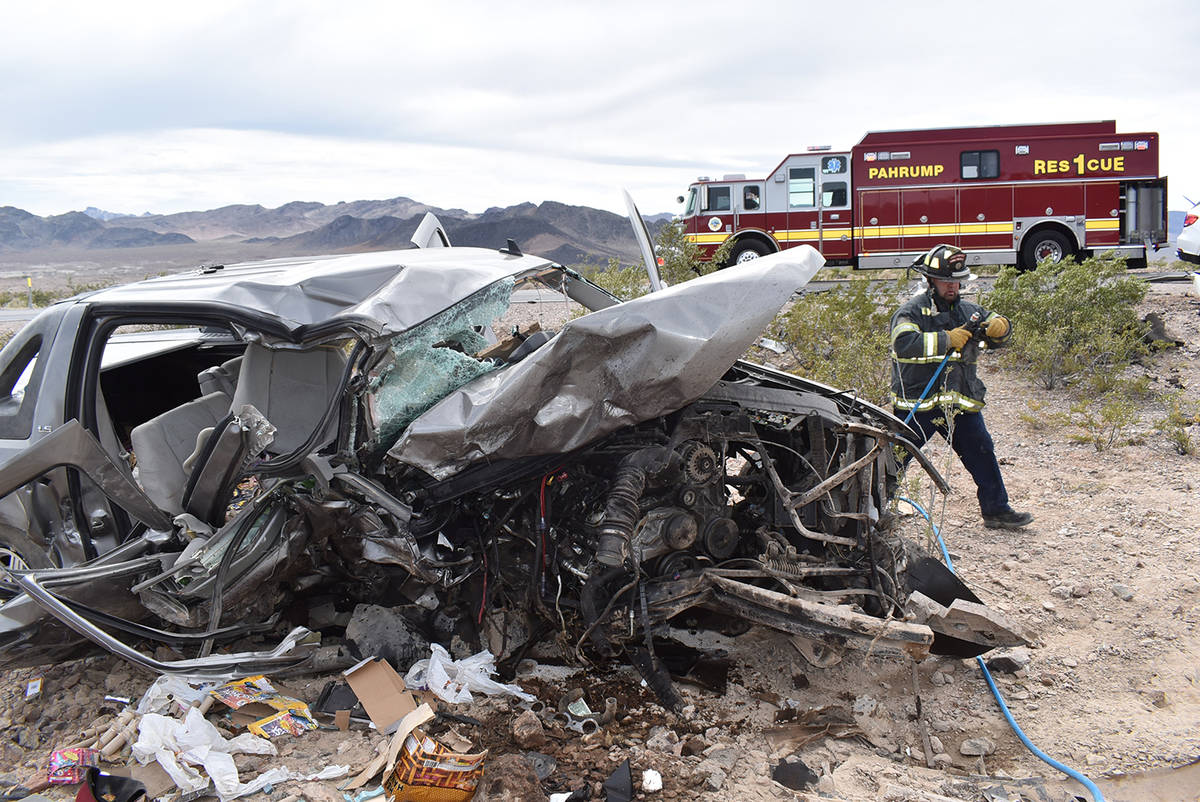 Special to the Pahrump Valley Times California Highway Patrol Public Information Officer Adam Otten, via a news release, said all of the individuals involved in the deadly crash were from Southern California. Authorities are investigating the exact cause of the collision.

Fire Chief Scott Lewis said crews were dispatched for a mutual-aid assignment in Southern Inyo County, along Highway 178 for a two-vehicle crash just before 1 p.m. on Sunday, May 31.

A total of three people died as a result of the collision, which involved multiple individuals.

“Crews arrived to find a highly dynamic accident scene with both vehicles having sustained extensive front-end damage, indicating an offset head-on collision,” Lewis said. “One vehicle was found resting on its side, well off the roadway onto the desert floor. The second vehicle was in the middle of the travel lanes.”

“They assessed a total of seven patients, where two were found not to survive their injuries on scene,” he said. “Three medical helicopters were brought to the scene where the patients were transported to trauma. One patient passed away as they arrived at UMC Trauma, and the rest sustained critical injuries. Pahrump Valley Fire and Rescue crews remained on location with Southern Inyo Fire Protection, to extricate and recover the two deceased that were heavily entrapped in the vehicles. Pahrump Fire and Southern Inyo also transported three patients total from the scene, in addition to the helicopter transports.”

As stated in a news release, California Highway Patrol Public Information Officer Adam Otten spoke about the dynamics of the crash, while noting those involved were from Southern California.

Earlier on Sunday, fire crews were dispatched to the area of Wheeler Pass for a single-vehicle crash just after 1 a.m.

Lewis noted that the incident which resulted in a fatality, occurred approximately six miles into the foothills of the pass.

“Crews arrived to find the accident as described, however the patient who suffered the injuries did not survive the accident and was pronounced deceased at the scene,” he said. The Nye County Sheriff’s Office is investigating.”

Fire crews were dispatched Sunday to the 600 block of South Highway 160 for a vehicle fire in the drive-thru of a fast food business.

“Crews arrived on location to find a vehicle mostly extinguished and out of the drive-thru,” Lewis said. “There were no injuries and the fire was quickly extinguished without incident.”

“On Friday May 29th, fire crews were dispatched to an initial report of a vehicle fire along the 3800 block of East Summit Street at approximately 7:30 p.m.

Lewis went on to say that crews also found fire venting up the front of the structure, and overlapping to the second floor.

“They commenced a rapid defensive exterior attack where they knocked down the main body of fire in the garage in quick fashion, thus halting the fire from entering the occupied residential space. The crews determined that all occupants were out of the residence and uninjured. Several pets were also removed from the structure and were uninjured.”

Additionally, Lewis said the cause of the fire is thought to be related to one of the vehicles parked within the garage that had a mechanical malfunction, which caused the ignition of the fire.

“Other materials stored in the garage included motorcycles and a lot of personal property,” he said. “The fire is believed to be accidental in nature. The contents in the garage were affected by the fire, however, the interior of the home was great. There was a little bit of water damage on the floor but there was no fire, heat or smoke. The crews did a great job.”

Also on Friday evening fire crews were dispatched on a mutual aid assignment along Highway 160 in Clark County for a single-vehicle crash.

Lewis noted that crews arrived to find a one-vehicle rollover with a man trapped inside a pickup truck, which was resting upright in the middle of the northbound lanes.

“Crews quickly extricated the patient and transported him to Desert View Hospital with CPR in progress,” he said. “The patient later passed away.”

A few hours later, fire crews responded to the 4100 block of East Savoy Street after the rider of an off-road vehicle sustained injuries following a crash just after 10 p.m.

“Crews arrived to find the accident scene as described with the patient exhibiting signs and symptoms warranting trauma,” Lewis said. “That patient was subsequently transported to Mercy Air Base 21 and flown to UMC Trauma.”

On Thursday, fire crews responded for a rescue assignment on the 4000 block of East Martin Street at approximately 10 a.m.

“Upon arrival, crews located a fall victim that had fallen and became entangled in a swamp cooler assembly,” Lewis noted. “Crews quickly extricated the individual, but the patient refused medical treatment or transport to the hospital.”