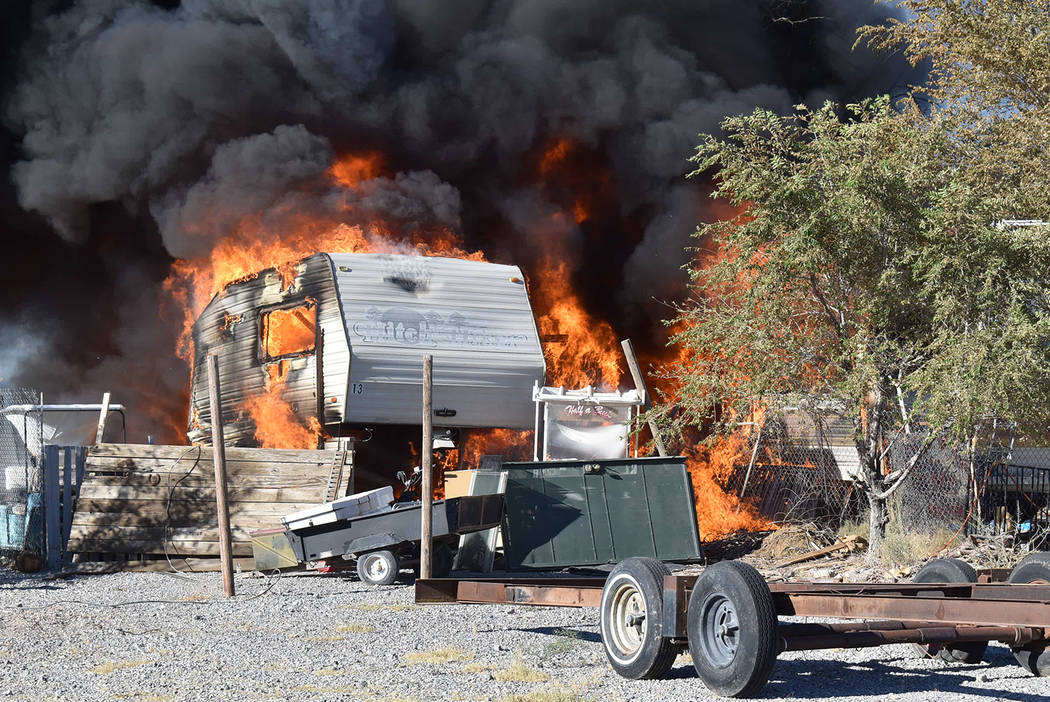 Special to the Pahrump Valley Times At least three RVs were destroyed after a fire broke out at an RV park along Simkins Road and Highway 160 on Tuesday afternoon August 20. Fire Chief Scott Lewis said the cause of the fire is possibly related to the use of a welder. No injuries were reported. 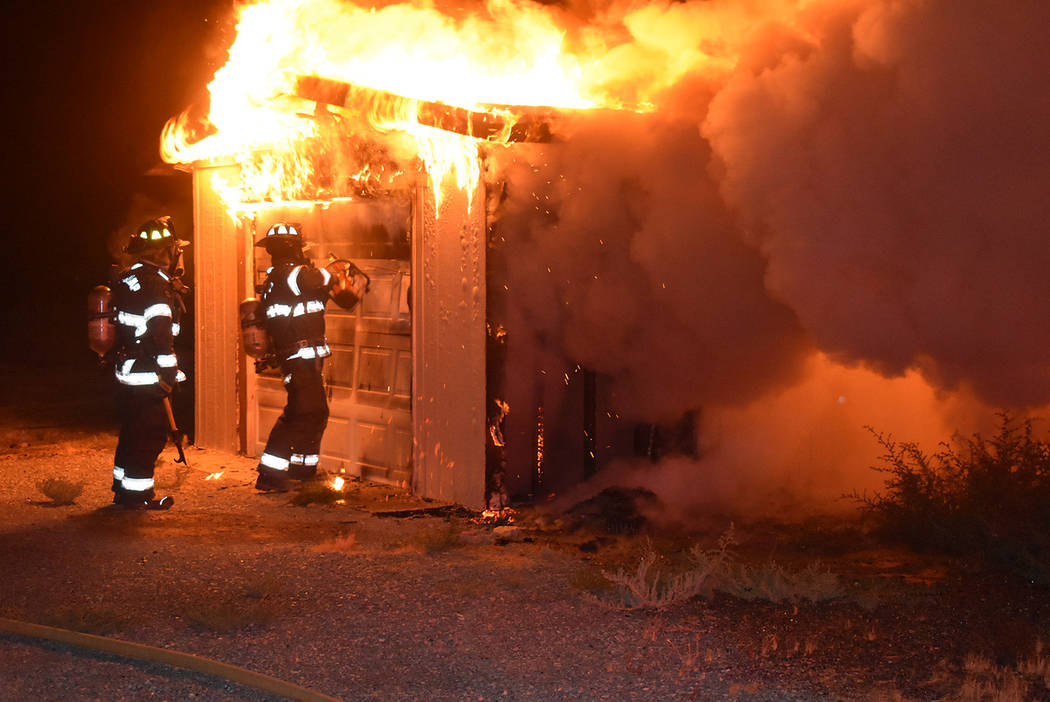 Special to the Pahrump Valley Times Pahrump fire crews were dispatched for a report of a structure fire along West Black Street, just before 9 p.m. on Aug. 19. The cause of that fire, according to Fire Chief Scott Lewis was related to improperly discarded materials from an unauthorized controlled burn. There were no injuries.

Multiple RVs were destroyed after a fire erupted at an RV park on the far north end of town.

Pahrump Valley Fire and Rescue Services Chief Scott Lewis said crews were dispatched to the area of East Simkins Road for a report of an unknown type of fire on Tuesday afternoon, Aug. 20.

“As we were responding, we were notified that the fire involved a trailer,” Lewis said. “Just as we were arriving, we were informed that the trailer park, with multiple trailers, was on fire. We arrived to find at least three RV’s used as fixed structures that were well involved, with numerous exposures.”

Lewis went on to say that fire crews commenced a defensive exterior attack and held the fire to the three original trailers.

“There was an initial report that a child was trapped inside one of the trailers,” he said. “That was determined to be unfounded, as the child had been removed prior. The fire is thought to be accidental in nature, possibly related to the use of a welder. It was determined that there were no injuries.”

On Monday, Aug. 19, fire crews responded to a reported structure fire on the 2300 block of East Calvada Boulevard just before 2 p.m.

“Crews arrived to find a second-floor balcony with fire showing,” he said. “The fire was on the verge of entering into both the balcony and the underside of the balcony. Crews quickly extinguished the fire with no further extension and there were no injuries. The cause of the fire is thought to be accidental in nature, possibly from improperly discarded smoking materials.”

On Aug. 18, crews were dispatched to the area of West Francine Street for an individual reportedly trapped underneath a piece of heavy machinery at 1:45 p.m.

Crews arrived to find that the machinery, a trencher, was removed by sheriff’s deputies just prior to the arrival of fire crews,” Lewis said. “That patient was subsequently transported to the local hospital.”

Just a short time later fire crews were summoned to the 200 block of West Retread Road for a structure fire.

“Crews arrived to find an extinguished kitchen fire,” Lewis said. “Crews investigated and found no further extension. The cause of the fire was determined to be accidental in nature and there were no injuries reported.”

Also on Aug. 18, crews were dispatched for a report of a structure fire on West Black Street, just before 9 p.m.

“Crews arrived to find a detached one-and-a-half-car, wood-framed garage that was well involved,” Lewis said. “There was no immediate structure exposure and the fire was quickly extinguished. The cause of that fire was related to improperly discarded materials from an unauthorized controlled burn. There were no injuries.”

On Saturday, Aug. 17, fire crews responded to an injury motor vehicle crash at the intersection of Basin Avenue and Highway 160 at approximately 3:15 p.m.

“Crews arrived on location to find a two-vehicle accident with a significant impact and damage to both vehicles,” Lewis said. “While there was no entrapment, one patient required flight. That person was transported to Mercy Air Base 21 and subsequently flown to UMC Trauma. Three additional patients were transported to the local hospital.”

Roughly an hour later, fire crews were dispatched for a reported brush fire in close proximity to structures.

“Crews arrived to find a well-developed mixed-fuel brush fire running along a one-story apartment complex,” Lewis said. “The fire was right up to the buildings, but it was quickly controlled with no extension. The fire is under investigation, but possibly related to the use of fireworks. There were no injuries reported.”