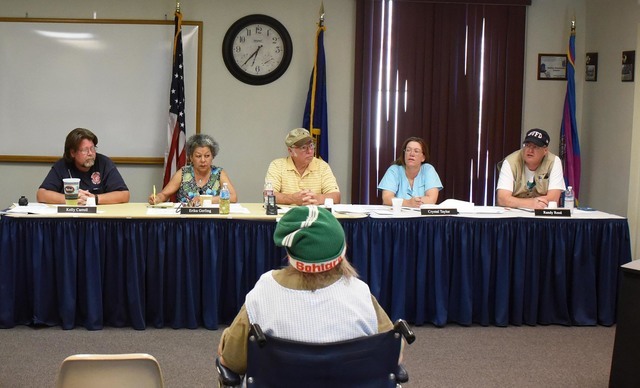 The terms of three current Beatty Town Advisory Board member - Kelly Carroll, far left, Dick Gardner, center, and Crystal Taylor, fourth from left - will expire at the end of the year. Letters of interest in those seats are due Oct. 21. Richard Stephens/Special to the Pahrump Valley Times

BEATTY – The town is looking for interested residents to fill expiring advisory board positions.

The terms of three current Beatty board members – Dick Gardner, Kelly Carroll, and Crystal Taylor – will end at the end of the year.

Anyone interested in vying for one of those seats has until Oct. 21 to submit letters of interest. The letter may be given to town secretary Carrie Radomski at the town office.

The board set the deadline for those letters at their Monday meeting, and also set Nov. 14 at 6 p.m. at the time and date for an election if required.

An election is only required if more people submit letters of interest than the number of seats to be filled.

Otherwise, the names of those submitting the letters of interest are automatically forwarded to the Board of County Commissioners for the appointments.

Radomski said that she has not heard anything from Gardner, Carroll, or Taylor as to whether they intend to submit letters of interest to retain their seats.

The secretary also noted that there is a position open on the Beatty Public Library Board of Trustees.

Marty Campbell reported that the Beatty Senior Center will run out of grant money soon and may face closure in January or February. He said this will be discussed further in a Senior Center board of trustees meeting in November.

The board very quickly approved the use of facilities and equipment by the Beatty Chamber of Commerce for Beatty Days.