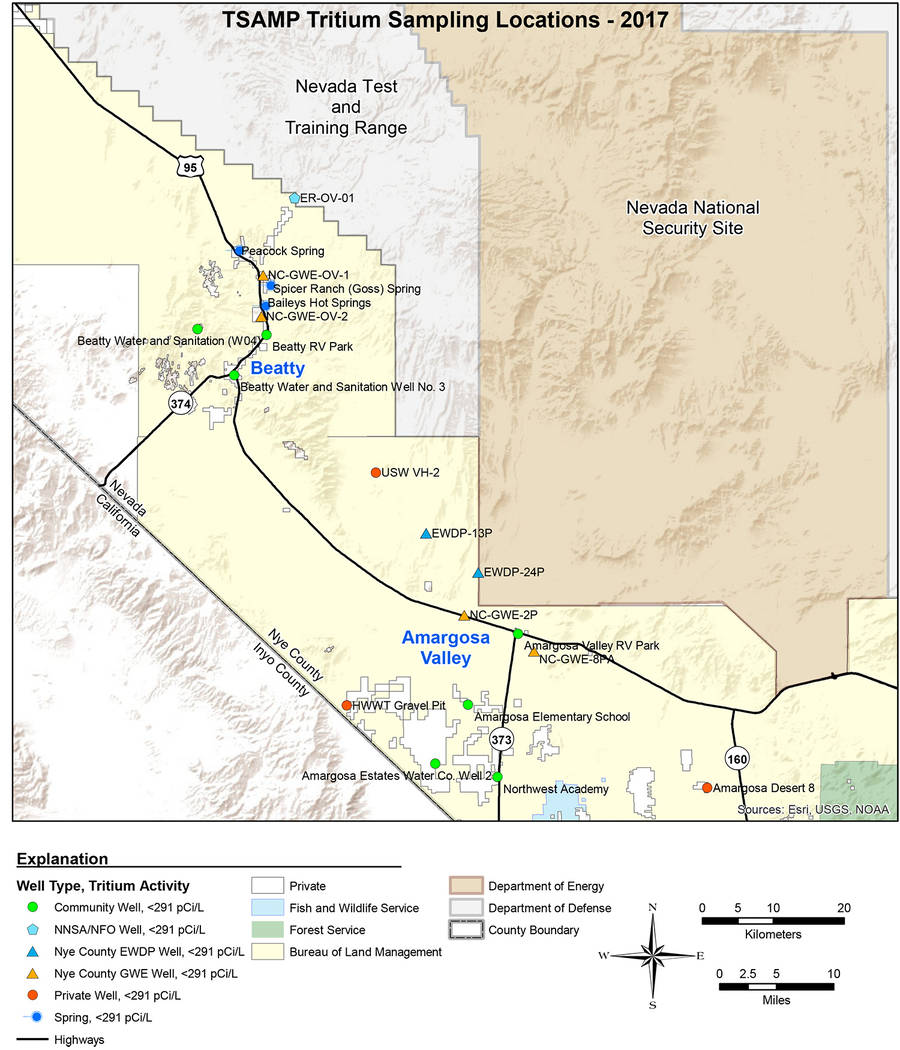 Special to the Pahrump Valley Times The map shown was provided by Nye County and shows the locations of the tritium sampling done in October and November, 2017. All test results came back showing undetectable levels of tritium in the groundwater.

The Nevada National Security Site, formerly known as the Nevada Test Site, was the home of numerous nuclear experiments and while these may have provided a level of readiness for the country in terms of potential conflict, they also left behind a legacy of uncertainty.

Safety concerns are generally foremost in the minds of those discussing the NNSS and for many, water is of the highest priority. For this reason, several entities, including Nye County, operate programs specific to ensuring the radiation released by former nuclear testing and weapons development does not reach the public’s drinking water.

In 2015 Nye County received a $1.25 million grant that kick-started the Nye County Tritium Sampling and Monitoring Program. After three consecutive years of testing, lab results continue to show that tritium levels remain undetectable in the water downgradient of the Nevada National Security Site.

“2017 was the third year of sampling under the grant and Nye County sampled 20 locations… The lab report indicates all samples were below the detection limits of 291 picocuries per liter,” Nye County Nuclear Waste Repository Office Geoscientist John Klenke explained of the latest results. “Tritium is a radioactive form of hydrogen with a half-life of 12.3 years. Tritium is sampled for in the water because it is one of the most abundant radionuclides generated by an underground nuclear test and because it is a constituent of the water molecule itself, it is also one of the most mobile.”

According to www.physics.isu.edu, tritium is typically used in research, fusion reactors and neutron generators. Low energy beta radiation is produced by the decay of tritium particles but this radiation cannot penetrate human skin, making inhalation and ingestion the most hazardous forms of exposure. Even so, the isotope is only a significant health risk if the intake is in large quantities, the website detailed.

Though the molecule is not extremely dangerous, tritium can act as something of an early warning system for more malignant chemicals. With tritium’s abundance and mobility comes the opportunity to observe a precursor to possible radioactive contamination in the groundwater that nourishes the communities of Beatty and Amargosa.

If tritium levels begin to spike in the watershed, it could indicate major movement by other, more dangerous radioactive chemicals and give the county time to take action.

Of the 20 locations that were sampled by Nye County in 2017, 17 were wells and three were springs. Klenke detailed that samples were taken on October 19 and then again on November 28, 2017. These included the first 10 sites identified for testing by the county in 2015 and an additional 10 sites, comprised of eight wells and two springs.

“The 2017 samples were taken in the vicinity of Beatty and Amargosa and were all downgradient of the NNSS,” Klenke stated. “Four duplicate samples and three blank ones were also taken to meet quality assurance requirements.”

The samples were tested through use of the standard tritium analysis method by Radiation Safety Engineering Inc. of Chandler, Arizona. All of the samples fell well below the Safe Drinking Water Act limit for tritium, which is 20,000 picocuries per liter. In fact, the samples taken had such a minute amount of the radioactive hydrogen isotope that they did not even trigger the detection level of 291 picocuries per liter.

Tritium monitoring in the water supply may be a major focus but it is far from the only effort to ensure public safety. Klenke noted that two other entities conduct sampling in the area of the NNSS, including the U.S. Department of Energy through the National Nuclear Security Administration Nevada Field Office and the Community Environmental Monitoring Program. In addition to tritium, the DOE tests for other radionuclides and the CEMP operates an air quality monitoring program as well.

“Nye County Tritium Sampling and Monitoring Program personnel keep in contact with both these programs to help ensure the tritium sampling work being done is both complementary and comprehensive,” Klenke said.