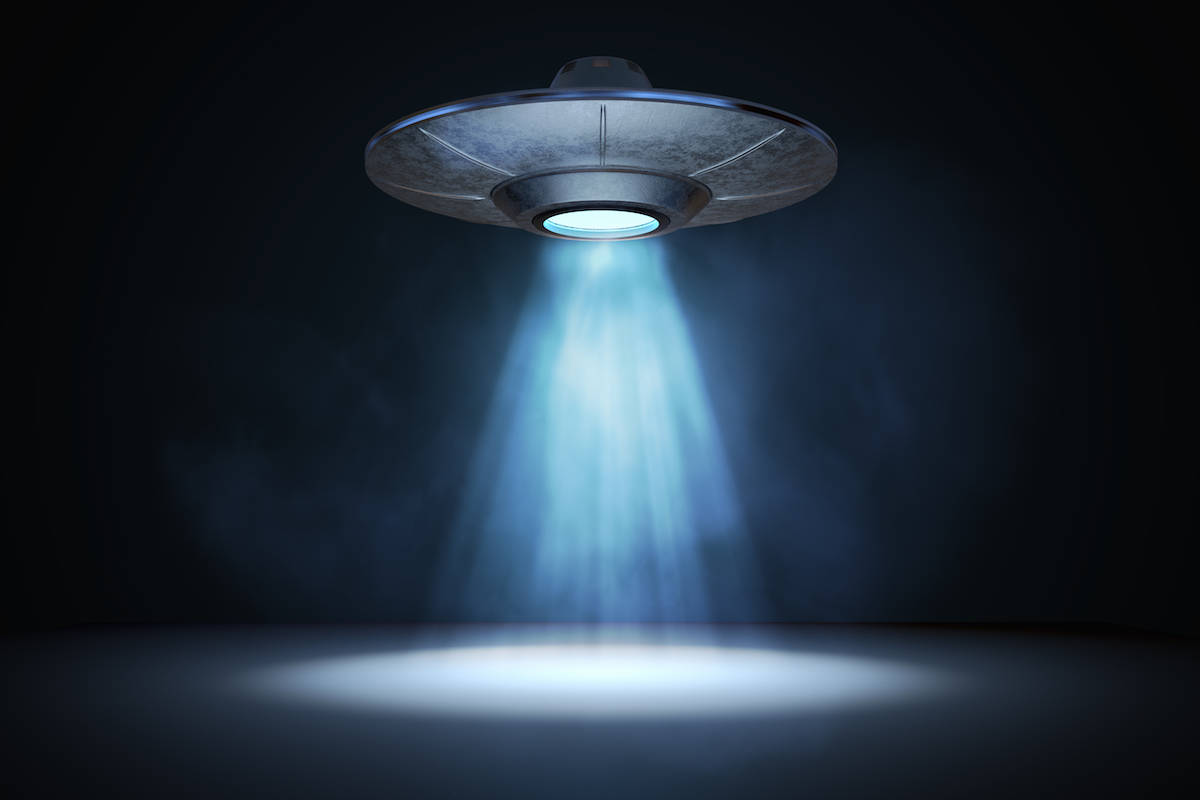 Getty Images A 3D rendered illustration of a light beam from a flying UFO.

Some believe that somewhere amid Area 51’s vast desert acreage is a heavily guarded underground lab where the government keeps and studies captured alien aircraft and possibly even aliens themselves.

We may soon finally get some factual information from our federal government about UFOs. Maybe. If we do, it will be because of legislation President Donald Trump signed into law. Last year’s $2.3 trillion appropriations bill did a couple of things: It provided millions of Americans with badly needed coronavirus relief aid, and it averted an impending government shutdown. The bill ran more than 5,500 pages and contained the Intelligence Authorization Act for Fiscal Year 2021, which itself carried an unusual provision in its “committee comment” section, beneath the understated heading “Advanced Aerial Threats.”

The stipulation mandates that the director of national intelligence work with the secretary of defense on a report detailing everything the government knows about unidentified flying objects, also known as “unidentified aerial phenomena” or “anomalous aerial vehicles.” The report must include “detailed analysis of unidentified aerial phenomena data and intelligence” gathered by the Office of Naval Intelligence, the Unidentified Aerial Phenomena Task Force, and the FBI, the provision reads. However, two factors might delay the report’s release. Agencies have missed similar congressional reporting deadlines in the past, and the provision is not technically binding. The language was included in the Senate Intelligence Committee’s report on the bill, not the bill itself.

Wanting to know what the government knows about UFOs is not only a hot topic among UFO enthusiasts but even those within the government. Former Nevada Senator Harry Reid, a longtime backer of UFO research, said, “The U.S. needs to take a serious, scientific look at this and any potential national security implications,” he said. “The American people deserve to be informed.” Several former presidents admit that they looked into UFOs, asking various agencies for information. Presidents Carter and Reagan acknowledged that they might have seen UFOs, according to reports.

President Clinton went further, asking directly for information on UFO sightings. He spoke out about his thoughts regarding aliens and UFOs on Jimmy Kimmel Live in 2014. Clinton said that he looked into the truth about Area 51 when he was president and had “all the Roswell papers reviewed,” anticipating that the White House would get many letters on the anniversary of the Roswell incident. But did President Clinton get a factual report on Roswell? Webster Hubbell, Clinton’s associate attorney general, wrote in his memoir that President Clinton asked him to find out all that he could about two things: who killed JFK and what the government knew about UFOs. After being stonewalled by the relevant agencies, he reported to the president that there was a secret government that closely holds secrets to which the president doesn’t even have access.

Former President Obama also was interested in UFOs. Appearing on the Late Show with Stephen Colbert, Colbert asked Obama about the classified information he sought during his presidency. Obama confirmed to Colbert that he asked officials about aliens, but to no avail, as the rest of us will never find out. On the topic of UFOs, Obama said – “Certainly asked about it.” When Colbert pressed the president for more details with an “And?”, he responded with, “Can’t tell you,” and followed with a “sorry.”

We will soon know whether or not the government is going to release a full report on UFOs. When Trump approved the spending package on Dec. 27, a 180-day countdown began, giving intelligence officials until June to deliver lawmakers their write-up. Until then, we will continue to wonder if “the truth” is out there.