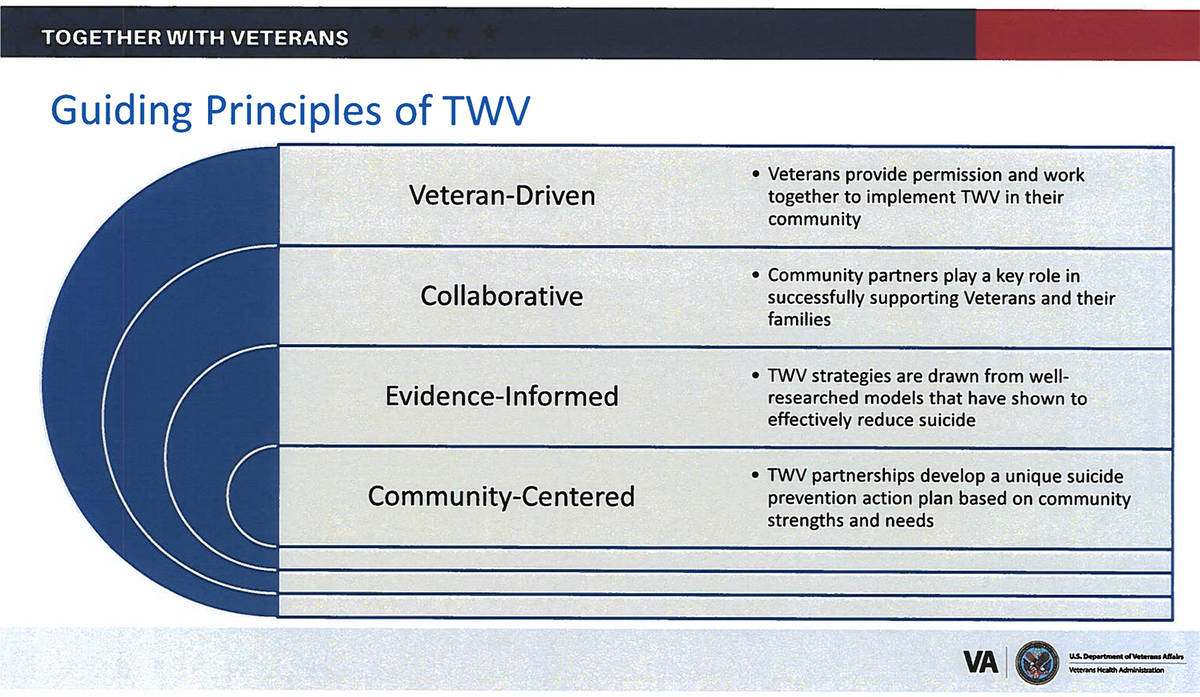 Special to the Pahrump Valley Times Taken from the presentation packet provided with the Nye County Commission's Feb. 2 agenda, this slide shows the guiding principles of the Together With Veterans Program.

Suicide is a nationwide tragedy affecting all kinds of people with all types of backgrounds but perhaps one of the hardest-hit groups when it comes to suicide is the county’s veterans.

The men and women who have stepped up to offer their service in the U.S. Armed Forces are at a higher risk for suicide, with the U.S. Department of Veterans Affairs reporting that the overall national suicide rate is 18.4 persons per 100,000 but for former military members, that number jumps to a startling 32 per 100,000. In Nevada, the statistics are even more grim, with the state’s veteran suicide rate pegged at 41.6 per 100,000.

It is with these grave statistics in mind that those paving the way for the Together With Veterans Program have honed in on the Silver State for expansion of the veteran-led suicide prevention program. Organization officials attended a recent Nye County Commission meeting to provide a presentation aimed at helping to spread the word about the Together With Veterans mission and to recruit the members needed in order to establish the program right here in Nye County.

“This program is relatively young,” Together With Veterans representative Robert Dare explained during the commission’s Feb. 2 meeting. “It was around 2015, Congress allocated funds to the VA with the stipulation that they would address this challenge across America. The VA flowed the funds to the Office of Rural Health and the money then flowed to the Rocky Mountain MIRECC, which is the Mental Illness Research Education Clinical Centers, there are about eight of them throughout the United States. They selected the Rocky Mountain MIRECC to honcho this program from the beginning because of the statistics around the western states at that particular time.

“MIRECC in turn contracted with WICHE, Western Interstate Commission for Higher Education, to actually design the program, develop the program and operationalize the program. WICHE was selected because of its extensive background in rural health programs and so that is who I am contracted with,” Dare continued.

The most important factor in Together With Veterans is that the entire program must be veteran-driven, with a majority of the steering committee to be made up of veterans. Dare said most communities seat between six and 12 members on the steering committee. There are other requirements that must be fulfilled as well, including the need for a coordinator and a facilitator, which do not need to be veterans, along with an entity that can receive the funds and provide leadership.

“The concept was that we wouldn’t come in and tell you what to do, but we would come in with the tools, the resources, the training and the funding, and the community runs the program as it fits in their community,” Dare stated.

Dare said Together With Veterans will provide initial funding of $40,000 per year for two years and then $20,000 for the third year to get the program launched locally. “The thought and mind (is) that by the time you’re moving into the third year of the program, you have thought about a means of self-sustaining or, it may come to pass that the program has run its course in the community,” Dare stated.

As for the entity that will receive and administer that funding, fortunately, one has already stepped up to offer that support, with local veteran Dr. Tom Waters, who was helping with the presentation on Feb. 2, remarking that the NyE Communities Coalition has agreed to act as the umbrella for the program. However, the organization is still in need of former military members who are willing to act as the leaders for the program in Nye County.

At the close of the presentation, the concept was met with enthusiasm by commissioners.

“It’s a very well-rounded program, it looks very productive and I think it can have some benefits,” Nye County Commissioner Leo Blundo said. “We have a very strong veteran community in Pahrump and I am very proud that we have that. It’s a testament. We owe the people who have served and protected this country, we owe them and we have to continue to provide different programs and products like this.”

Nye County Commissioner Donna Cox added, “I am glad to hear that this is coming about, it affects every family one way or another when they have a veteran who has health issues and bad memories from the past… I am extremely happy to see you doing this.”

Commissioner Bruce Jabbour chimed in to voice his support, too, telling Dare, “I’d like to thank you very much for your presentation.”

“Well, Mr. Dare, it looks like you have the support of your commissioners. Let’s see what we can come up with for a steering committee so you can launch this program and make it happen!” Nye County Commission Chair Debra Strickland concluded.

Taking the lead in Nye County is local veteran Cathy Girard. Anyone interested in becoming a part of the Together With Veterans team in Nye County can contact Gina Brimner at gbrimner@wiche.edu or 720-708-9321 or Robert Dare at rdare@wiche.edu or 404-42207254 and they will put the interested party in touch with Girard.

For more information on Together With Veterans visit TogetherWithVeterans.org or MIRECC.VA.gov