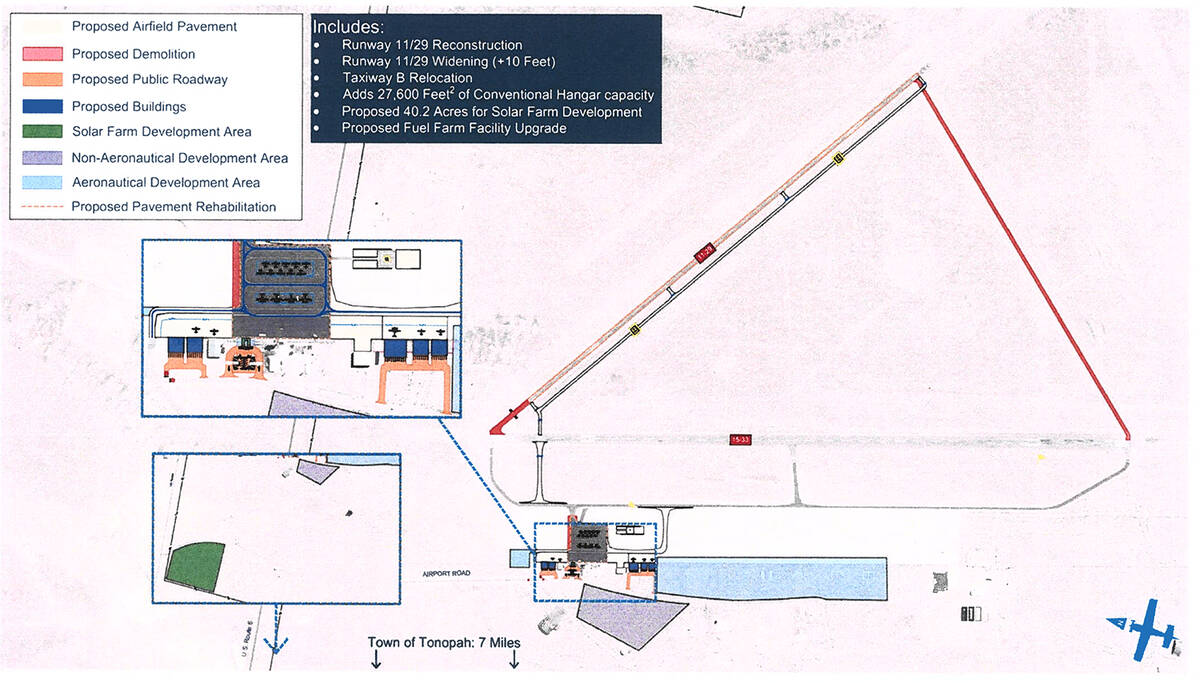 Special to the Pahrump Valley Times This slide from the Tonopah Airport Master Plan presentation shows the future airport layout as recommended by the preferred development alternative. 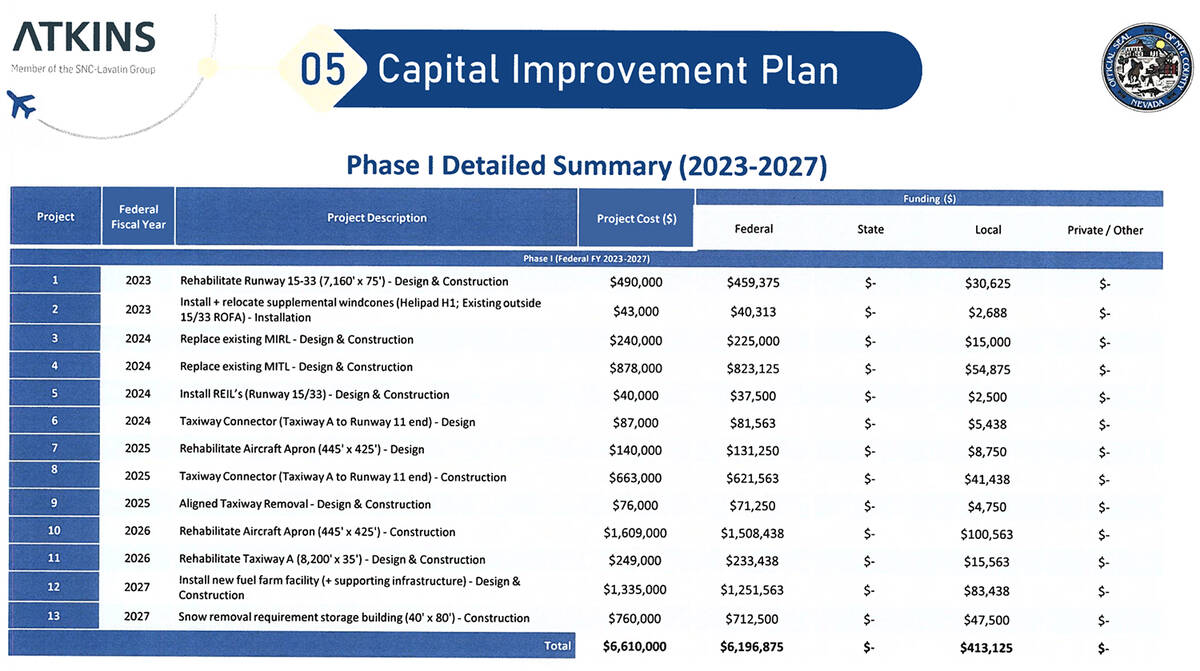 Special to the Pahrump Valley Times Included in Atkins North America's presentation on the Tonopah Airport Master Plan was this summary of the proposed projects and expenditures at the site over the next five years.

Representatives from Atkins North America, Inc. went before the Nye County Commission this month to summarize the final draft of the Tonopah Airport Master Plan, a document three years in the making and one intended to direct the airport’s operations and growth over the next two decades.

Gavin Fahnestock of Atkins headed the presentation, kicking things off by explaining just what the master plan is.

“The airport master plan is a comprehensive study that covers a 20-year time frame for the airport. It focuses on the short, medium and long-term development of the airport in order to meet the needs and demands of the airport,” Fahnestock explained.

The process started with an investigation period in which “demand forecasts” were projected, based off historical data as well as the socio-economics of the area. The next stage was the recommendation phase, where Atkins suggested a variety of alternatives as to how to meet the projected demand. Now, the contractor was on the cusp of the third and final step, implementation.

Two different forecasts were detailed, one for the operational side and a second for base aircraft. While there was a lack of operational data, Atkins persevered. Utilizing methodology recommended by the Federal Aviation Administration, the company was able to identify a “preferred growth rate” of 0.11% for operations.

The base aircraft forecast showed a flat line, with no growth anticipated. “The reason for that is just based off of the information that was available for historical base aircraft at the airport,” Fahnestock stated. “Because we didn’t have a growth trend that we could identify, we had to stick with what the FAA recommended.”

Moving on to the development alternatives, Fahnestock said there were two created and presented to the county. The preferred aspects of each were then selected and incorporated into the airport layout plan.

Continuously evolving FAA standards means that facilities at airports may need to be modified in the coming years, which is intended to improve safety. Therefore, several taxiway adjustments are called for. In addition, there is proposed future development for the terminal area, including reconstruction of the existing apron and future construction of new hangars and aprons to accommodate future demand.

Three phases of development have been drafted, for a program total of $42.76 million. The first two phases each cover five years while the third covers the final 10 years of the plan. Of the more than $42 million in expenses, a majority should be federally funded, with the county only required to foot about $2.57 million of that cost over the next 20 years.

Fahnestock emphasized that airport planning is not an exact science and there may be variables that effect the actual development.

“What we built into these are different benchmarks throughout the forecast period. As the airport increases it operations, you hit those benchmarks and you realize you need to start implementing that next development phase… If that rate (of growth) is slower, we would slow down that development implementation. If that rate is faster, we would move forward into the next phases,” he said.

As for just what having a master plan for the Tonopah Airport will do for the county, Fahnestock noted that not only does it give the county a blueprint to guide development, it also provides the reasoning for the proposed projects, which is necessary to secure grant dollars.

“The amount of projects we are recommending here and the amount of funding that would be required are going to be aided through the federal and state assistance programs, through those grant programs, and the master plan provides the justification that the county is going to need in order to pursue those projects,” Fahnestock stated.

Finally, he said the master plan will provide the county with the information it needs to identify and mitigate any potential runway obstructions.

“And those tools and resources don’t really end there,” he continued. “The master plan really is a versatile tool that can be used on a day-to-day basis for various aspects of planning, development and implementation around the airport and in the airport environment as well.”

Now that Atkins has finished the Tonopah plan, the company will be turning its attention to another in the county, the Beatty Airport. In October, commissioners approved a task order for the development of a Beatty Airport Master Plan for a total of $440,000. Once again, the bulk of the cost will be covered by FAA grant monies, with the county to pay just $27,500.