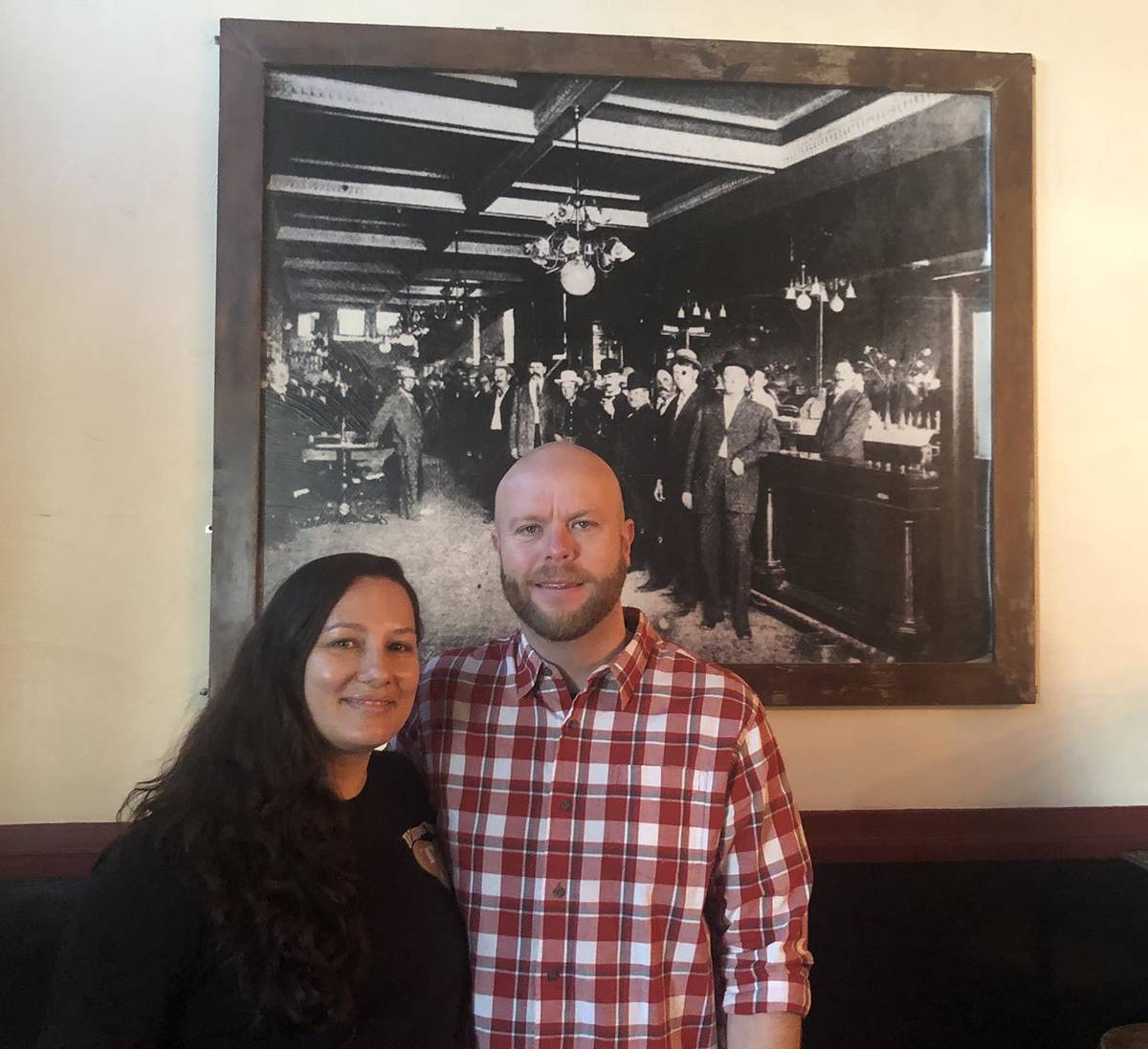 Tom Rysinski/Times-Bonanza & Goldfield News Tonopah Liquor Company owners Tiffany and Marc Grigory in front of a 1908 photo of the bar's interior, which has the same ceiling today. 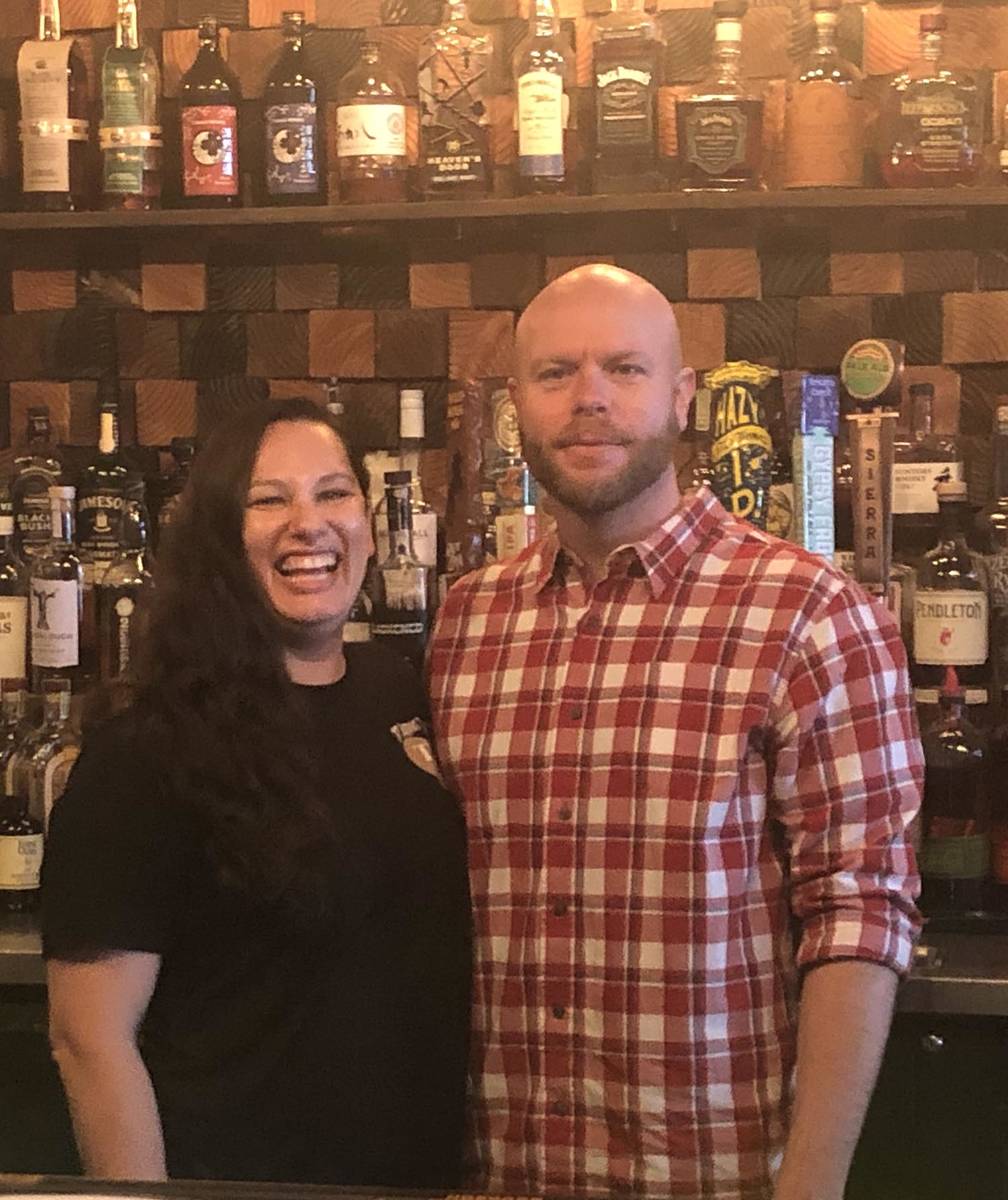 Tom Rysinski/Times-Bonanza & Goldfield News Tiffany and Marc Grigory behind the bar at Tonopah Liquor Company, which they have owned since 2015 in a building that dates to 1906. 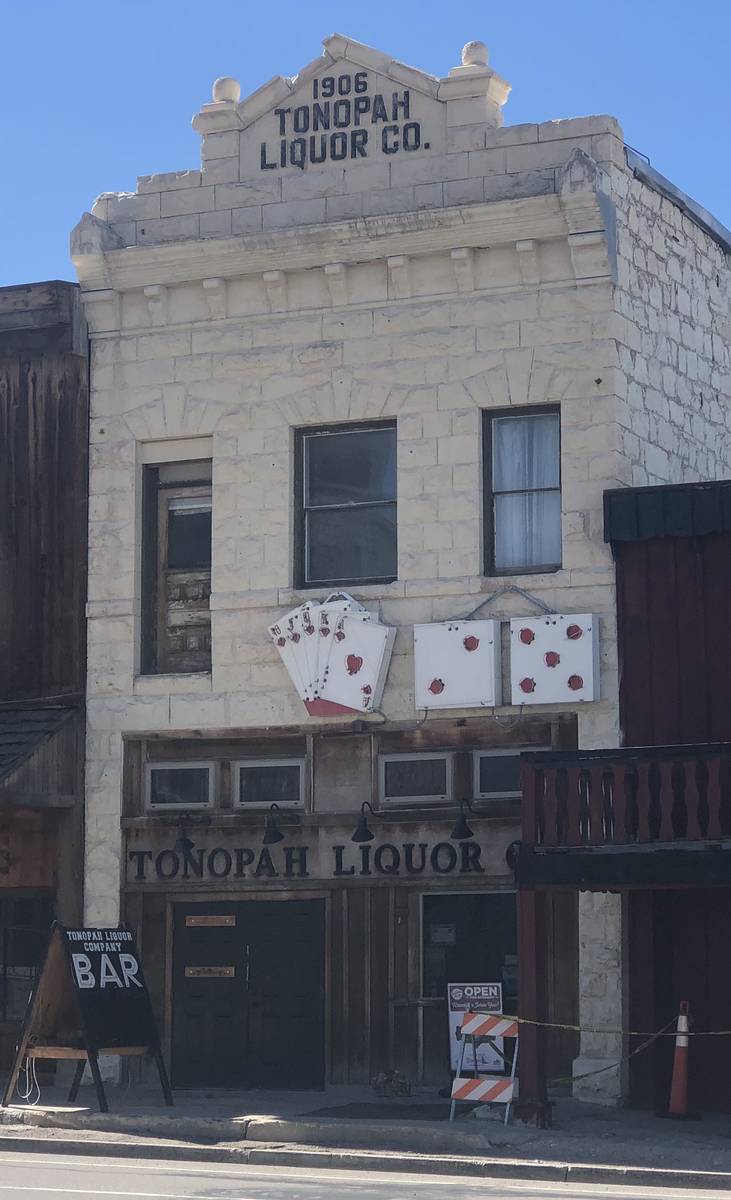 Tom Rysinski/Times-Bonanza & Goldfield News Tonopah Liquor Company has stood on this spot at 113 North Main Street in Tonopah for 115 years. 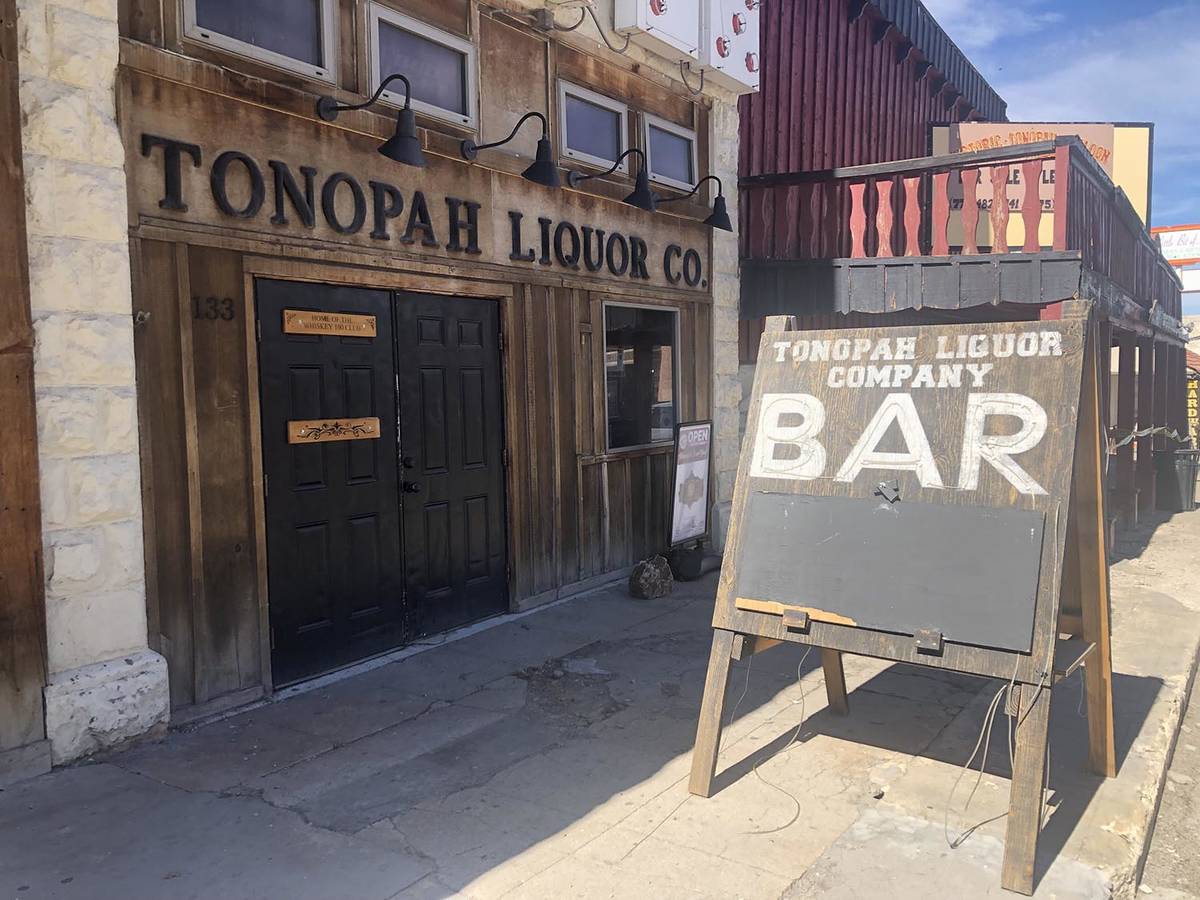 Tom Rysinski/Times-Bonanza & Goldfield News Tonopah Liquor Company welcomes customers walking on Main Street as it has for more than a century. 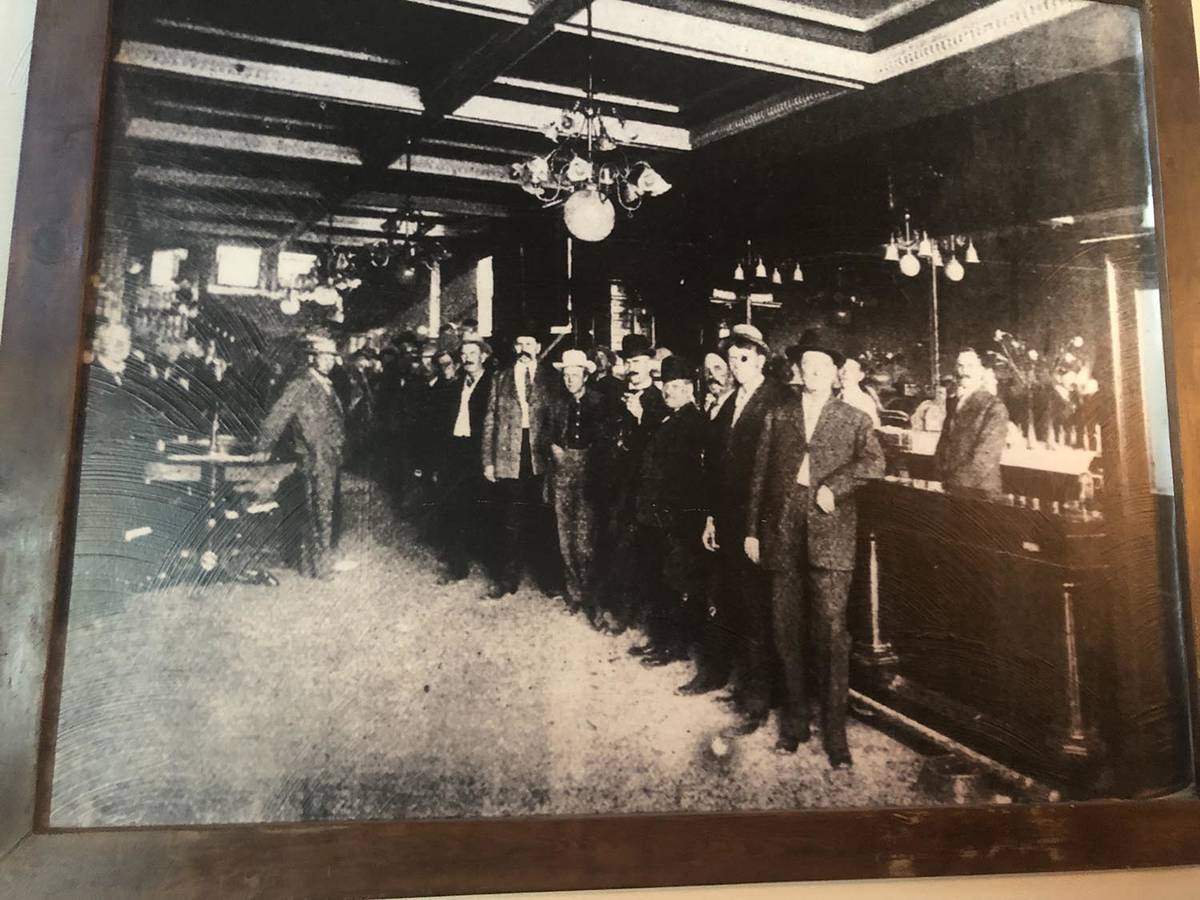 Tom Rysinski/Times-Bonanza & Goldfield News A 1908 photo of Tonopah Liquor Company, taken two years after it opened, shows the same ceiling the main bar area has today. Photos of the building's long history line the walls of the interior, one of the few things owners Tiffany and Marc Grigory changed when they bought the building in 2015.

“We closed for three months,” Tiffany said. “There’s no way to get out of this, we had been thinking. Somebody called us and said, ‘I will give you money, I can take a loan out for you.’

“Everybody wanted to help. We had done a GoFundme and people that don’t come to the bar were donating to our GoFundMe because it’s an integral aspect of our town. People that just are not bar people — church people, Mormons. …And I thought that was just kind of amazing.”

She estimated that more than half of the donations they received were from people who are not regulars at the bar, which has been on Main Street since 1906. That longevity was a big part of the allure for the couple, who bought the building in 2015.

“He found the bar on Craigslist, and I was eight-and-a-half months pregnant,” Tiffany recalled. “It was a little ridiculous. He’s a brave man.”

“We had already decided we wanted to start a business, and we were trying other things,” Marc said. “Home inspection was probably the one we got the furthest into. My brother had taken the class, I had taken the classes, we were almost ready to go.

“And then this popped up, and I never even heard of Tonopah. Living in Vegas my whole life, I didn’t know it existed. I never went north.”

But go north they did, Marc and a very pregnant Tiffany, wandering into what for them was the great unknown.

“I was a house,” said Tiffany, laughing at the memory. “I had my feet out the window. We got here, I waddled out of the car, and then we saw the building and I was like, ‘This is gorgeous.’ “

“It’s a beautiful building,” Tiffany said. “There used to be a brothel upstairs. It’s a two-story building with a basement. The basement extends past the building. When you’re standing on the sidewalk, you’re standing over our basement, which is insane. And it’s why we haven’t fixed the sidewalk. It’s not an easy fix.”

That’s a minor issue for a 1906 building and a turn-key bar And with a price tag of $185,000, which seemed too good to be true to them. Marc and Tiffany had effusive praise for previous owner Mark Zane, who they credit with making their purchase happen. “We could never have done it without his help,” Tiffany said.

But in a way, it seems as if the couple was meant to own a bar.

Both had other jobs. Tiffany has a degree in nutrition and had planned to become a doctor, but the recession disrupted the plan, and she found herself leaving Hawaii and going back with her mother in Las Vegas, looking for a job.

“I got the opportunity to be a cocktail waitress,” she said jokingly. “They handed me my uniform in two tiny, little pieces.”

But it was no joke when she met Marc.

“We were friends for two years, and it’s been go, go, go ever since.” That includes getting married (nine years in August); “trading in our house for a bar,” as Marc put it; and having two sons, Carson, 7, and Colin, 5. Marc also has a 17-year-old son, Cameron, who lives with his mother in Las Vegas.

Then there’s the minor matter of leaving Las Vegas and landing in Tonopah.

“This town has embraced us,” Tiffany said. “We were concerned from day one. We were strangers from Vegas, and they were like, ‘Hey you guys moved from Vegas and you bought a bar in our town? OK! We just want to come and support you.’ We were packed opening night. It was amazing.”

It didn’t take long for Marc and Tiffany to realize they weren’t in Kansas any more.

“It’s a unique culture,” Tiffany said. “There’s not a whole lot of time wasted on niceties. You really get to know who people are pretty quickly, and it’s kind of jarring coming from Vegas where there’s all niceties and no substance.”

“That was the biggest thing I noticed when we got here,” Marc agreed. “Everybody’s real. They are who they are, and they own it.”

What they are not is fancy, uptown social drinkers.

“We came here with our Vegas mentality that we needed a full bar, every flavor of vodka you could imagine,” Tiffany recalled. “We had six different gins, tequilas. People just want Jack and Jim Beam. Captain’s another big one.”

“We could have survived with six different products, and we had hundreds,” Marc said. “But tourists appreciate it.”

But something from that era has proved popular.

“We started the 100 Whiskey Club,” Tiffany said. “We have our club, and if you try 100 whiskeys you get in the club. Our Whiskey 100 Club now has 10 members, we just moved from nine to 10. They meet once a month. They started a YouTube channel. They do whiskey tasting, whiskey reviews. We continue to raise the bar for our whiskeys, and it’s been really fun.”

Marc and Tiffany made an effort from the beginning to get involved in their adopted hometown. Marc is the clerk on the town board, and Tiffany just recently stepped away from the Tonopah Main Street Board. They have been active in the Rotary and coordinate staple events for Jim Butler Days.

And people know where to go after those events.

And while there isn’t too much competition in Tonopah — the only other freestanding bar in town is the Bug Bar, Marc said, the rest are in casinos or hotels — what competition exists is friendly.

“There’s the Mizpah Club across the street,” Marc said. “People bounce back and forth. Their bar is 24 hours. We don’t call that competition. I think the customers think it’s more competition than we do.”

“We’ll go over there for a night out,” Tiffany said. “People will be like, ‘We were just here having one drink. We’re going right back over there.’ And we’re like, ‘Are you kidding? We’re here, too!’”

Great relationships with other business owners, being a part of the fabric of the town and owning a 1906 building on Main Street make for a pretty good existence. For the Grigorys, each recently 40 (“I’m three months ahead of her,” Marc said), life is pretty good, even if the past year has been their toughest.

“We came here and said if it doesn’t work out, we’re young enough,” Marc said. “We’ll give it five years. Well, we’re at five years.”

“We’re still recovering from thinking that it was all lost,” Tiffany said. “We can’t see too far into the future.”

Whatever the future holds, there will be one constant: Tonopah Liquor Company will be standing at 133 North Main Street, just as it has since 1906.