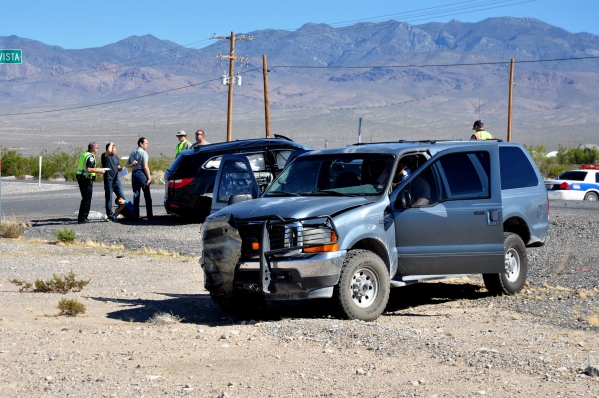 A Chinese tourist was killed following a two-vehicle collision along Highway 160 and Bell Vista Road just after 10 a.m. Saturday morning.

61-year-old Zhongping Zhou from Beijing, China succumbed to her injuries sustained in the crash and was declared deceased on scene.

In a press release, Nevada Highway Patrol Trooper Loy Hixon said the initial investigation shows the driver of a late model Hyundai Santa Fe pulled out in front of an oncoming vehicle causing the collision.

Pahrump Valley Fire and Rescue crews responded to the collision.

Fire Chief Scott Lewis said crews had a difficult time trying to communicate with the tourists once on scene.

“The initial investigation revealed that there was a person who didn’t survive the accident and we had numerous other patients occupying both of the vehicles,” he said. “One group spoke little, if any, English. We opted to handle it as a mass casualty incident due to the number of patients that were required to be transported. We had an additional five people who were driven by ambulance to our local hospital.”

“There were airbag deployments throughout the vehicles, which remained upright,” he said. “It was a significant T-bone-type collision. Both vehicles sustained severe damage.”