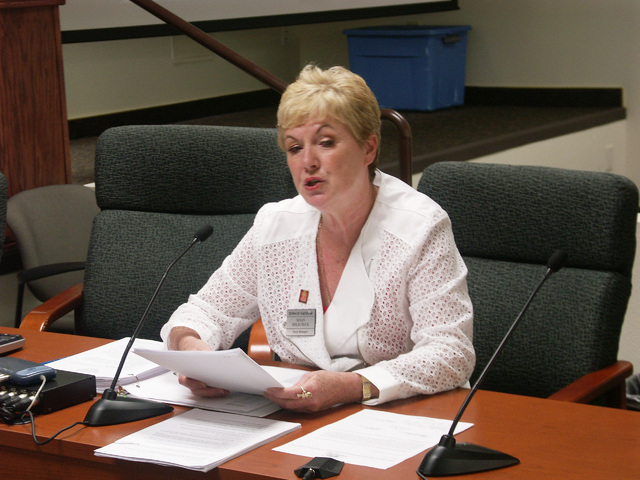 Pahrump Town Manager Susan Holecheck was challenged by one of her own employees during this week’s regular town board meeting.

Finance Assistant Carla Yoder, during public comment, called the town manager to task on five agenda items pertaining to the ratification and implementation of staff and department head contracts, including a revised contract for Holecheck.

In a prepared statement, Yoder accused the town manager of being selfish.

“I want to say that these items on the town board agenda are the most blatantly selfish act yet, on behalf of a town manager. There are approximately 50 employees that work for the town and here they are singling out five, to provide contracts for and give nine months of severance pay to. That is five management employees who are being placed above the other 90 percent of town employees,” she told the board.

The items, according to Holecheck, were placed on the agenda by board member Amy Riches to address what the town manager said were gender disparities regarding salary and benefits.

“You cannot have three men getting gravy over here, and three women who are not. This disparity could present legal issues and be problematic for the town. They are not equal and that’s not good. There’s too much of a potential for somebody to cry foul,” Holecheck said.

Additionally, Holecheck noted that the action has nothing to do with the county taking over fiscal control of the town’s finances.

“It doesn’t matter that the town is transitioning. I would have done this in any event,” she said.

Board member Dr. Tom Waters said he thought Yoder’s comments to the town manager were misguided.

“I don’t think they’re listening when the town manager talks to them about certain things and they don’t have all of the information. They are focused on how it will affect them instead of looking at what the town manager is trying to say,” he said.

Waters also said it was not Holecheck who authored the items, but rather his colleague Riches.

“One of the town board members, Amy Riches, put together a contract change for the town manager. The town manager has to put it on the agenda, what we tell her to put on. She works for the town board, and to say that she was selfish in putting that in there, she’s not the one who did it. It bothers me when people act without all of the information,” he said.

Town Board Chair Harley Kulkin said the contract related agenda items were designed to protect the jobs of town employees.

“Why do you need a department head when you don’t have employees? I think it’s a tremendous disgrace the county commission has not indicated what the future of the town employees is. One needs to know what their future is. How could they have not received in writing, a letter what the plans for the future are? Can you imagine what it must be like to have a family and thinking about how are you going to feed them next year? They paid into retirement for years and it’s going to go down the toilet. How can you do that to people?” he questioned.

Waters, meanwhile, said though he disagrees with what Yoder had to say, he agreed she had every right to express her feelings.

“It does make sense to look at everything, but I think only department heads and the town manager need contracts. The other side to that, in my belief, the town manager is the only one who works for us. Why do we need to review the other contracts? That should be something between the town manager and the employee,” he said.

Some were new contracts while others were only making a few revisions to contracts already in place.

“Management should be spending this time working with the county trying to get some assurance for staff that they have a job or at least get people notice so they can start looking for a job if their position is being eliminated,” she said.

The financial assistant also said Holecheck had full knowledge about the future of the town manager position when she was hired by the board last year.

“The town manager was hired knowing that it was a temporary position. She was hired knowing that the town was being taken over by the county. Of all the people that work for the town, she is the least deserving of a contract and severance. She came into this job knowing what was in store for her,” Yoder said.

Waters, meanwhile, said after speaking to a fellow board member, he’s not sure if the item would have been approved had the board taken a vote.

“I don’t believe the entire town board would have voted for the lengthy months that was in there for the severance pay. Carla Yoder had no idea what the town board had in mind. If she had approached me, I probably would have told her no and I wouldn’t vote for nine months of severance pay. She would have had the answer instead of making the statement she made,” he said.

Waters noted that the same could have been said for county officials regarding the restraining order.

“There was no real reason for that. If they had come to Susan and requested that she table the items, I think it would have gotten tabled. We did not need a court injunction,” he said.

The town will present their argument in court on Monday at 10 a.m.