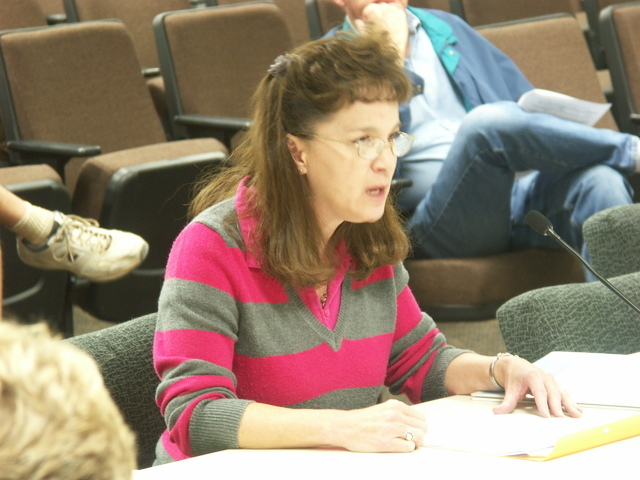 It appeared Town of Pahrump Finance Assistant Carla Yoder was spoiling for a fight with Town Board members and Town Manager Susan Holecheck during Monday’s town board meeting, but no one on the board took the bait.

Under public comment, Yoder tore into Holecheck over a $321 discrepancy for fall festival services. Holecheck has a discretionary spending limit but the bill came in from Nye County Search and Rescue at $5,321.

“Since that made the contract amount over her spending limit of $5,000, I sent a request to have the item put on the next agenda,” Yoder said. “Her response was to process the invoice.”

Yoder then contacted her boss, Finance Director Michael Sullivan for direction on the matter.

“He told me it was a violation of policy and not to pay it,” Yoder said in part. “If I don’t follow the policies and procedures, I get disciplined. However, I did follow them and I was disciplined for insubordination because according to Ms. Holecheck, I ignored numerous written requests for payments of this invoice.”

Holecheck, who is Sullivan’s supervisor, noted that the town used the crews to assist in parking lot security at Petrack Park after another local organization opted out this year.

“Search and Rescue and the Civil Air Patrol did a wonderful job, but additional man hours were needed,” Holecheck said. “When they first submitted the invoice, we didn’t know what the total was going to be. Unfortunately we got the invoice too close to the fall festival so we didn’t have time to agendize it.”

Town Board Chairman Harley Kulkin advised Yoder that a board meeting was not the appropriate setting to air internal grievances.

“Before you start, I know your general topic that you want to talk about,” Kulkin said. “I informed you that I didn’t think this was the forum for that because it’s a personnel issue.”

In an effort to pay the bill, the town manager said she issued a $4,000 deposit to search and rescue until the overall costs were provided by the agency following the fall festival.

“After the festival, they came back and with added man-hours, and they said the total would be $5,321,” Holecheck said. “They were nice to separate the hours between Civil Air Patrol and Search and Rescue. We could probably have divided the money and still been below the $5,000, but accounting thought it would be easier to just do one check. What seemed to be the problem, was that it was $321 over my discretionary limit.”

The issue, according to Holecheck, will appear on next month’s town board meeting agenda.

“We want to respect our employees’ sense of privacy, but it’s unfortunate that an HR situation was brought into that forum.” Holecheck said. “I am the town manager and I report to the board. I need to follow board directives and I need to administer the office day to day. In the military, a general doesn’t need permission from the master sergeant to ask a private to do something.”

She also wanted to rebut a comment made by Yoder suggesting the board had violated the Open Meeting Law when discussions between the town manager and individual board members took place on the issue.

The Nevada Revised Statutes dictate that members of the board can’t speak among themselves or deliberate about an issue until they are on the dais. Holecheck said her individual discussions did not violate the law.

“This case had nothing to do with the board talking among themselves,” Holecheck said. “This board takes that very seriously. They wouldn’t do that nor would I put the board in that position. I can call each of them independently to learn their feelings about an item.”

The town manager said board members individually suggested to her to pay the $321 invoice. Though Holecheck directs town staff and department heads, she must answer to the town board, who collectively are her bosses.

“In this case, the board said it was a very nominal amount and each of them had different responses, but they agreed that search and rescue did a job for us and they did it well,” Holecheck said. “Each of the board members in their own way said it needs to be paid and directed me to ensure that it gets paid. I work for my board and I need to respond to my board.”

At present, search and rescue still has not received the total amount for services rendered during the fall festival.

Holecheck said she’s puzzled why an office employee demanded that she get the approval of the finance director to pay an expense that was directed by the Pahrump Town Board.